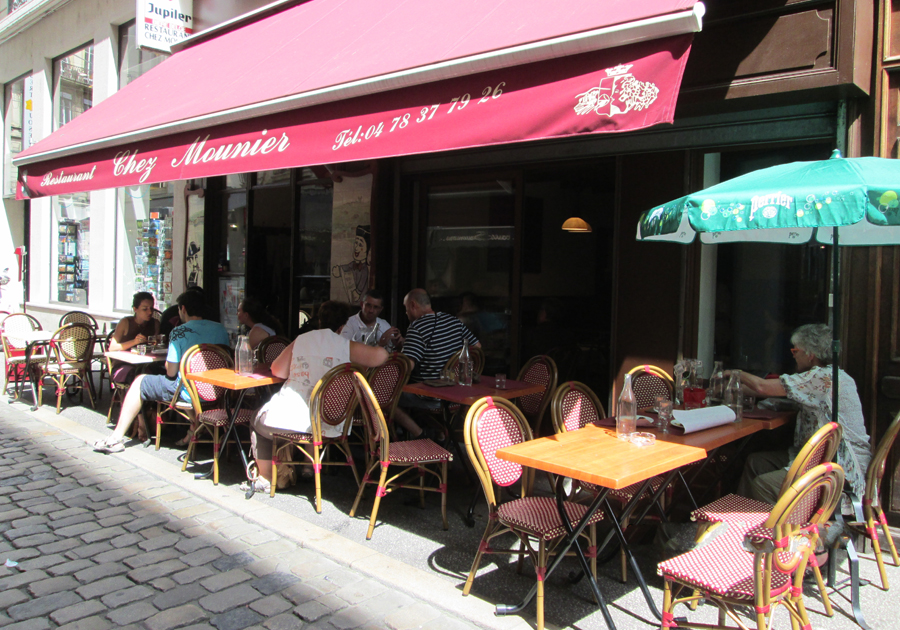 It was a Saturday in July and my son and I had just arrived in Lyon, the city described as the ‘world capital of gastronomy’. Our quest was the restaurant ‘Chez Mounier’, a bouchon at 3 Rue des Marronniers, a pedestrian street in Lyon about two blocks from the Rhône River. Bouchon is a term designating a restaurant in Lyon that serves traditional cuisine Lyonnaise. Only a handful of the more than one thousand eateries in Lyon are certified a true bouchon, made a household word by Les Mères, the Lyonnaise mothers, middle-class women who left the hearth fires of home and went to work as cooks. These Mothers of Lyon are largely responsible for Lyon’s gourmet reputation, blending homemade and traditional foods.

Lyon is surrounded by amazing regional terroirs. From the north of Lyon come Charolais beef, fish from the Saône River, and Beaujolais. Bresse supplies poultry certified with the coveted Appellation d’Origine Contrôlée, and neighboring regions contribute freshwater fish and crayfish. South of Lyon are grown vegetables, fruits, and wines from the Rhône Valley, the Ardèche grows chestnuts, and pork and cheeses come from Dauphine. And last, but not least, from west of Lyon are the farms which supply the charcuterie, salt meat, sausages, terrines, and pâtés. It is a wonderfully complex area of locally produced culinary delights.

We nabbed the last available outdoor table at Chez Mounier and squeezed in, surrounded by light-hearted locals enjoying good company and wonderful food, the best of all combinations. Our waitress was a no-nonsense forty-something-year old who knew intimately the foods prepared at her bouchon. She guided us through the menu (my French was too generic for the local specialties) and we both ordered salade Lyonnaise and saucisson de Lyon that came with amazing gratin potatoes.

Standard fare but oh, so fresh and deeply tasty! I’d never had a salad that could qualify as comfort food, but this one did. The ham chunks, poached egg, and vinaigrette on the greens was a meal in itself. Then came the sausage, also outstanding, followed by a small slice of tarte aux pralines.

A trip to the bathroom was in order, and let me say up front that visiting a toilette in France is something I do with bated breath and an air of expectation. This particular water closet was not to disappoint. It was, really, half a WC which one entered directly from the busiest thoroughfare in the restaurant. After wedging my way into the facility I had to admire the frugal use of space, obviously designed by an engineer with a twisted sense of humour. (You know what I mean!)

By now we were as jovial as everyone around us. Bien mangé. Lyonnaise food is what chef Paul Bocuse, who apprenticed under one of les mères, Mère Brazier, the most renowned of all the Mères, refers to as ‘honest food.’ Amazing what a good meal will do.

10 reasons why Lyon is better than Paris