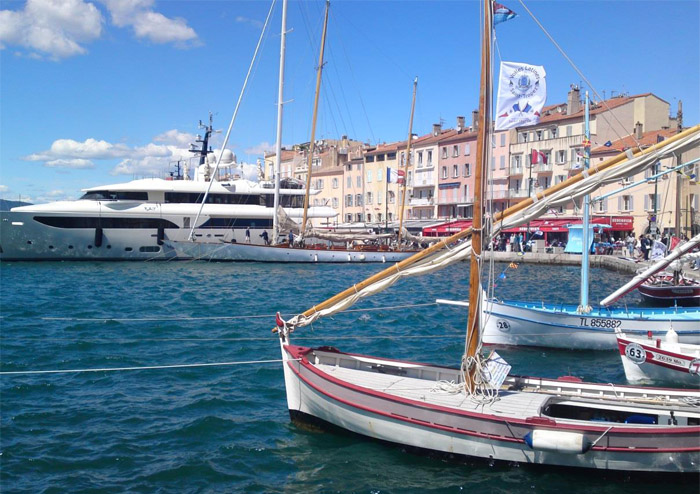 David Shoestring heads to the prestigious Riviera village to see how the other half live.

A visit to St-Tropez last year managed both to confound and to exceed expectations. The boats in the harbour may be somewhat grander than of old, but harbourside buildings are substantially unaltered visibly from their appearance 100 years ago. But not internally of course! Tiny, insignificant shop fronts mask illustrious proprietors – Chanel, Versace, Louis Vuitton and Rolex – and small ‘designer’ shops display exquisitely detailed dresses, fashionable shoes and accessories for the ladies and, not to be outdone, their equally fashionable escorts. On the Côte d’Azur, it is noticeable how so many immaculately attired and perfectly coiffured older gentlemen are accompanied by startlingly beautiful and considerably younger ladies. This is the home of the glitterati after all.

Walking around the village – for that is the impression it gives – there is an endless delight of narrow streets leading to tiny squares, centred by a large, carefully manicured plane tree perhaps to provide some valued shade. Along tiny passageways, small house windows often feature shutters, iron grills and window boxes flowing with greenery and vivid geraniums. How, we wondered, do they flower so well in such heavily shaded streets? The secret is artificial silk flowers placed amidst a verdant background of real greenery. Not quite what they seem… like everything else in St Tropez.

Landside, around the harbour we see a resemblance of normality. Quaint old buildings housing bars and restaurants with throngs of visitors sat at outside tables, people watching and enjoying lunch. But look to the seaward side and here we see absurdity. Huge motoryachts moored stern-to-shore, each having three or four deck levels, and each worth many millions of pounds. Their pristine, shiny hulls dazzle, exactly as intended of course as each boat vies for public attention and adoration, seeking to dominate its neighbours, but collectively succeeding only in dominating the townscape.

Driving around St-Tropez feels strangely similar to driving around a small town in Devon. Narrow lanes, tall hedges and high walls over which are glimpsed desirable properties, not all necessarily so very grand. In one very unassuming gateway, several chauffeurs are stood around in conversation, for the shy, modest building is really a smart hotel. In another small private house driveway, a young couple are just getting into their car: a shiny yellow Lamborghini. It takes three smartly uniformed gardeners apparently, to trim a modest hedge in another ordinary residential side street. Just as we found at Monaco, everything is perfectly kept here, except that St-Tropez is kept a ‘shabbily old’ perfect, whereas at Monte Carlo it is a ‘glittery new’ perfection that is required.

We don’t meet any film stars, but it does feel as though we’re walking around an ‘ideal village’ film set, just as the Welsh village of Portmeirion was used for the old cult TV Series ‘The Prisoner’. Any moment perhaps, one of the huge balloons that featured in each episode will billow round a corner and herd us back to the car park.

And perhaps it is the car park that provides a clue as to how St-Tropez copes with progress. A well signed ‘P’ directs us into the mouth of a familiar multi-storey – except that this multi-storey goes down four floors instead of upwards for fear of spoiling the skyline. And there’s one final contradiction to our expectations. As we have found everywhere in France, once inside the clean and well lit car-park you are asked for a relatively inexpensive €3.60 for two or three hours parking – in the centre of one of the country’s most expensive and fashionable resorts!

It is true that we did not make a ‘grand entrance’ by arriving in a superyacht or a Ferrari, but we so enjoyed walking around this ultra-chic harbour in exactly the same manner as everyone else there, whatever their wealth or station. We watched the same passers-by; we enjoyed the same smells; the same noises even as we absorbed the whole ambience of the place. Standing on the harbour wall and looking out across the bay towards Sainte-Maxime, we all felt the same blustery winds on our faces. We all shared the sunshine. Do go.