In our new Life After Brexit series, we look at how British expats in France are facing life post-Brexit. What are the personal and professional changes and challenges that lie ahead for small businesses, homeowners, and retirees? In our second installment, Charlotte Visser chats with expat Bob Leach who has lived in France since 1989 and opened up a wholefoods shop, La Vie en Vrac, in 2020.

There is a shelf in Bob’s shop devoted to the great British favourites: Marmite, Colman’s mustard, digestive biscuits, Branston pickle… He has pulled the last jar of Branston Pickle forward to the shelf’s edge.

“While stocks last,” says Bob. “Nothing is coming through from Britain.”

Thursday morning is market day in Excideuil and Bob has had a busy morning at La Vie en Vrac, despite the rainy weather. He is replenishing the bins of oatmeal, rice, raisins, lentils, linseed and pearl barley. En vrac translates as loose or in bulk, and customers can help themselves to any quantity they desire. “Before moving to France in 1989, I had a wholefoods shop in Canterbury,” he explains. “Using my UK supplier, I set up a market stall in France, which proved to be very popular. I have been using the same supplier for my shop in Excideuil.”

“Sadly, the process for importing goods from the UK has become a minefield. Each product is supposed to have a code, which you can look up on a website. But the website is treacherous to navigate and the lists are incomplete. For goods that don’t originate from the UK, like peppercorns and tea, the rules and regulations are still more mysterious. Suppliers can’t cope with the extra hassle and cost of the paperwork. It’s more than a hiccup: businesses are going under.”

Bob’s range of wholefoods is impressive and available both organically and conventionally-grown.

“I find that people like to have a choice. Organic wholefoods are readily available in France, but they are more expensive. The trouble is that I have not been able to source conventional wholefoods in this country.”

Bob tries not to panic. He has diversified into locally-produced wares such as honey, chutneys and hand-crafted soaps. The organic vegetables are a bestseller. At 71, Bob draws a pension and is financially secure. Remarkably, he opened his shop in the period between two lockdowns. “I have always worked in retail and in cafés, and when I retired, I found that I was missing the contact with customers. I have lived in Excideuil in the Dordogne for many years and am very much part of the local community. I don’t want to lock myself away in my house.”

Have COVID-19 restrictions affected the business?

Fortunately, as an essential business, Bob has been able to remain open during the lockdowns and the shop is doing very well. “I have customers who prefer to shop in the open air at the market or in smaller shops to avoid exposure to Covid in the supermarket. The other notable effect of the pandemic is that Parisians who have second homes in the area, have come to reside here permanently, if they are able to work online. Often these are higher earners who inject some cash into the local economy.”

I can see why Bob loves Excideuil; it’s a warren of pretty little streets, squares and courtyard gardens, hidden behind graceful stone facades. Seated on a rocky outcrop, the 12th-century castle dominates the views from the town and from afar. Bob’s shop, with its cheerful hand-painted windows, is situated halfway up the main shopping street, which leads up to the elegant tiered fountain on the Place Bugeaud. Beyond lies the Halle Municipale, which between November and March is dedicated to the Marché au gras et aux truffes (foie gras and truffles market).

On the way up to La Vie en Vrac, I passed some empty shops. Fabienne, the florist, is the latest casualty. In a note stuck to the window, executed in a beautiful French hand, she confesses to having suffered from burn-out. Bob and I drift into a conversation about the demise of town centres and the rise of out-of-town supermarkets and retail areas. ‘Excideuil has one of the better markets in the district, and even in winter, it brings in locals from the surrounding areas,’ he says. Markets in France provide so much more than an opportunity to purchase locally produced, high-quality food; they are also an occasion for friends and acquaintances to exchange news and gossip. Come noon, the terrace under the lime trees fills with shoppers and their bulging bags. Bob adds the caveat, ‘under normal circumstances.’

Advice for small businesses in France

His advice to new arrivals hoping to build up a successful retail business in France, is to choose a good spot near a post office, bank, baker or pharmacy. Excideuil still has plenty of independent shops and cafés. It’s two o’clock and opposite La Vie en Vrac, a bijouterie unfurls its metal shutters. The antique shop awakens from its midday slumber and the shoe shop is continuing its January sale well into February.

I’ll just get that last jar of pickle… 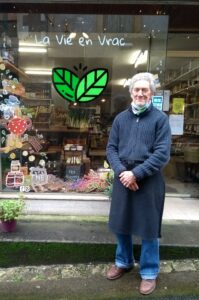 Life After Brexit: Curry in the Time of COVID

Healthcare in France After Brexit: 2021 Onwards

Travel Between the UK and France: Brexit and COVID-19 Rules