In this guide we offer an introduction to the Gard Department for property and real estate buyers. This article reports on the different areas of the Gard, property prices and trends in the region, flood zones, mosquito prone zones, and best locations for reaching facilities and transport.

The Gard is numbered Département 30 in France and stretches from the Bouches du Rhône Valley in Provence on the east, takes in half the Camargue region with its traditional horses, bulls, and rice fields along the coast, ends at the gates of La Grande-Motte and runs up inland to the Cévennes hills. There it borders Drôme, Ardêche, Lozère, and Aveyron.

The Gard has a Mediterranean climate and its vegetation is typically south European with olive trees, vineyards, palm trees, garrigue scrublands, fig trees, apricot and cherry trees. It gets 300 days of sun a year and is bathed in the intense mediterranean sunlight that attracted artists to Provence from the 19th century onwards. Temperatures reach 40°C, (104° F) in the summer and average low of 3-5°C (37.4 – 41°F) during the winters. Although much milder than the UK winter, winter in the Gard is noted for the strong Mistral wind which can make the region feel very cold in the height of winter at times. Winter is short, and lasts for a couple of months before temperatures start to warm up again around February. Spring starts earlier, and summer starts around May with midday temperatures in the mid twenties (25° C or 77° F). Warm weather extends through to much of October with normal temperatures at midday still reaching 24 – 25 ° C (77° F).It is advisable therefore to have good insulation in your property for the winter, and in the summer a swimming pool on very hot days can feel like a life saver (some might think it absolutely necessary). 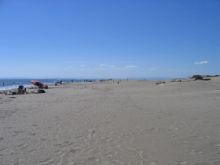 The Gard is a varied Department, with distinct geographical and cultural differences. By the coast you will find beautiful sandy

Mediterranean beaches, where one can practice sailing, and where there are somewhat too many tourists in the summer. The Grau du Roi and La Grande Motte are large bustling tourist resorts in the summer, but Port Camargue is the largest marina in Europe. One can still escape the bustling crowds and find more remote beautiful sandy beaches further along the coast in the Gard.

In the south of the Gard from St Gilles downwards are the Camargue wetlands, which spread into the Bouches du Rhône in the east. There the terrain is flatter, marshier, rice is grown, bulls are traditionally farmed, and horses have become part of the culture and way of life celebrated there. The culture of the Carmargue is quite distinct.

Inland, at the northern tip of the Gard, one finds the higher, wilder and more remote mountain ranges of the Cévennes (where one can ski in the winter), again with its unique history. This region is remote, it is very beautiful, the pace of life is very

relaxed, and prices are still reasonable. Temperatures in the Cévennes are generally fresher than along the coast.

But below the Cévennes, from Sommières east through the Vaunage across the top of Nîmes, to Uzès the Pont du Gard and up to Bagnols, the culture and countryside is very Provençal. There are pretty villages, vineyards, and gentle rolling hills where the pace of life is very relaxed and civilised. If you situate yourself in the right part of the Gard you can live in beautiful charming villages with stone houses, surrounded by vineyards and gentle hills, and be an hour from the beaches of the Mediterranean in the south, an hour from skiing (in winter) or hill walking and canoeing (in summer) in the north, and less than an hour from Nîmes and Montpellier theatre, cinema, restaurants and life! C’est la dolce vita!

The central administrative city in the Gard is Nîmes, which has a rich cultural and historical identity that differs considerably from Montpellier, its rival in the Hérault. Culturally, Nîmes is proud of its Roman history, its impressive Roman architecture, its Protestant Huguenot ancestry, its bull fighting, its Pentecost Féria, its brandade and provençal tapenade, and olives. It is also replete with beautiful boutiques, a restaurant and café lifestyle, markets, exhibitions, and festivals. All the necessary fundamentals of life can be bought at the ‘ville active’ shopping zone on its perimeter.

To the eastern side of the Gard is the Valley of Céze which is noted for its gorges, rivers and well preserved medieaval villages. This area borders the Ardeche and the Rhône Valley which is typically Provencal and pictoresque.

Property prices are said to be rising here, but at a generally slower rate. Although there has been a dropping off in the British and German markets foreign buyers are still active. You should definitely try and bargain people down here as the boom days have receded. Where people really need to sell they are often finding that they have to drop their prices. This is particularly true the higher up the market you go.

On average prices have risen here from between 40 – 65% depending on the area over the past five years, and the closer you are to Montpellier the higher the prices. The commuter belt for Montpellier reaches as far as Nîmes. Prices for a three-bedroomed stone cottage in the countryside in a desirable location are likely to be € 300,000 – 400,000 and up. It is possible to find cheaper than that but you should generally seek something over that threshold. Garden space is difficult to find in the Languedoc because of the sort of houses that were traditionally built in villages. But modern villas on the outskirts of a village usually will come with some land and often even a pool.

Apartments in Nîmes remain expensive here, with one-bedroomed apartments costing around €2,300 a meter² for an older apartment, and more for a new build apartment.

Renovations start at € 100,000 for a set of crumbled walls. For renovations with more substantial potential you will need up to € 230,000 to buy and maybe spend another €150,000 again to make it habitable.

The region is noted for flooding, particularly in early September, which is now becoming something of an annual event. The flood zones can be found on our link, and there is advice on how to avoid buying an “inondable” property on our flooding article. The region is also prone to having water shortages in the summer months where restrictions might apply.

In the St Gilles region by the marshes, there can be an irritating problem with mosquitoes at certain times of year, but they are not malarial, and the local authorities do what they can to keep the problem under control.

The Gard is served by RyanAir from Garons Airport, ten minutes south of Nîmes, which flies to a number of destinations. It is also served by the TGV which links Nîmes to Paris, and from there London Waterloo and other major European cities.