If you ask someone why the Hérault is a popular place to buy property and real estate and live part of the year round (if not all of it) the answer is simple – it’s the life on offer there! The Hérault is a prime real estate location thanks to its position in the south of France, its coastline, its proximity to Spain and Andorra, its access to mountains, gorges, rivers, beautifully preserved medieaval villages, vineyards, and of course the sun.

The Hérault is blessed with a beautiful coastline of generally well preserved sandy beaches, most of which are under the protection of the Conservatoire du Littoral, an organisation which ensures the quality of the coastline. Today 13 of its beaches have been listed for European Blue Flags because they meet the criteria for natural habitat, quality of drainage water and bathing water and urbanism. That is not to say that the Hérault doesn’t have its fair share of
tourist seaside resorts in the height of summer, but they don’t necessarily typify the quality of the beaches in the Hérault. 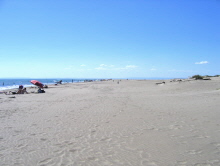 Inland it boasts the Haut-Languedoc, which is in fact the foothill region of the Cévennes mountain range. This is an extremely beautiful and dramatic area rich in rivers, gorges, natural bridges, canyons, and lakes. The Haut-Languedoc is less remote and wild than the Cévennes in the neighbouring department of the Gard. As a region it is less cold than the Cévennes, and benefits from lower house prices – up to 15 – 20 % less than the areas on the plains of Hérault by the Mediterreanean. The prices are largely lower because they are between 45 minutes to an hour away from the sea, and further away from major centres of city life where employment is centred, but maybe all the more attractive for that.

Therefore, depending on where you choose to position yourself in the Hérault you can be half an hour from the excellent beaches of the Mediterranean, half an hour from rivers, gorges, canoeing, sailing, restaurants and shops.

Béziers is actively vying with Nîmes to get RyanAir flights scheduled, and expanding the runway. If successful, the region will experience both an expansion of tourism and a rise in property prices, as more people discover Béziers to be cheaper and easily accessible for “le weekend”.

The region is an hour and a half from ski slopes at Les Angles or Andorra, or Mount Aigoual in the Cévennes. Barcelona can be reached in two hours by car, Provence in an hour and a half, and did I mention that officially it gets 300 days of sunshine a year?

In winter the region is not so much affected by the Mistral, which blows icily in the Gard, but by the Tramontane. The Tramontane is less cold than the Mistral, and less intense. It tends to blow for four or five days then stops for at least a week.

Therefore, given the advantages of the region, its not surprising that the Hérault has been the centre of intense house buying interest over the past four years when property was selling like hot cakes. The foreign buyer interest has driven prices up over the past four or more years to the point that a property costing around €140,000 four years ago, today appears on the market for € 250,000.

Many village properties in the Hérault are generally unlikely to come with a garden. This is because historically most of the villages, when first constructed, were built to be encircled within the chateau walls. Gardens were therefore more of a logistical encumbrance than an asset to those building in restrictive space. However, there are gardens to be had – at a price.

Renovations start as low as € 50,000 which might include walls, and a roof. However the same property would sell for € 100,000 as a renovation project if there was a garden. One could expect to pay at least another € 150,000 to have the property well renovated at professional prices, installing plumbing, electricity, sewage, water etc. The property could then be worth around € 300,000, depending on the quality of the work. Renovation properties are rarer than was once the case.

Activity in the market hit an unexpected low in 2005, which took some estate agents by surprise. However, there are some signs of a modest recovery. As a result of the market this year, vendors in the Hérault have had to be more realistic about what they put their properties on the market for and prices have stabilised, even dropped in some regions. As ever, it is worth bargaining if you are buying.

However, in the longer term, the prices are expected to rise and one doesn’t need a crystal ball to see why. The population of the Hérault is currently continuing to rise by almost 10 % a year. The region’s planners are expecting that, due to ongoing high interest both within France and Northern European countries, the population of the region will continue to rise over the longer term, as more and more people seek to retire or relocate to warmer, more attractive climates. Planners are ensuring that the infrastructure of the region will be there to match it. Some forecast that the population will, in fact, double over 20 years. Time will tell.