Terry’s Tale of Renovating in the Limousin

The excitement of owning French property had not diminished. The cooling off period had passed and we had sent the 10% deposit to the Notaires office, and were now waiting for the call, to summon us back to France to sign the acte de vente and commit ourselves to a house in France.The money transfer from our British bank to the French bank seemed a complicated procedure, and we had to pay £30 for the privilege, but that was a minor irritation compared to rewards that awaited us. We were under no illusions that the property in the tiny village of Cluptat needed a lot of TLC and hard work, after all it was 199 years old and hadn’t changed in all that time, little or no improvements had been made. It was a one up and one down with a barn attached, a breeze block garage, an annexe at the rear and large building suitable for storage plus a very deep and romantic looking well, and 400 square metres of detached land. The mind was racing with ideas for conversion, but the first priority would be to install a toilet and bathroom, as neither existed at the moment, god only knows how they managed in the prior 199 years, it would be fair to say the nettles grew exceedingly high and thick. The good news was that there was mains drainage running past the front door, electric connected, and running water.

Six weeks passed painfully slow, and then the call came, and off we went to sign up to the good life, French style. From our home town in the North East of England to the cottage it is a two day trip six hours to Dover a ferry crossing and a further eight hours to the Creuse. We learned our lesson from first trip, which I drove in one night and day, it was so tiring that we decided a hotel break was essential to safety and of course to the enjoyment of the French countryside. We soon found the Hotels compared to England were extremely cheap, bed and breakfast in a comfortable room with TV, including BBC 24 hour news, and en suite facilities, the cost for two people was only 50 euros, and the food was everything we expected. We arrived in Bourganeuf two days later, meeting up with our estate agent, we collected the house keys and immediately went to view the our house. 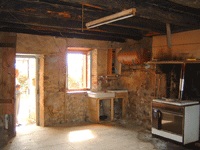 The big day finally arrived, and off we went to meet the Notaire. The Notaire in France, is a government official and acts for both party’s and it really speeds the process up and is extremely fair. The whole procedure was informal, the notaire spoke excellent English, and went to great lengths to make sure we knew exactly what was going on. He asked questions to both the estate agent and ourselves, about the house the price, any dangerous materials etc, and when he was satisfied that both party’s were in agreement, we signed the documents, shook hands, and became the proud owners of a little piece of France. The balance of the monies owing to be paid on our return to England, The next three days were spent exploring the area, clearing and cleaning out he house and barn. Rough plans were drawn, which included breaking through into the barn to give internal access, concreting the barn floor, building a mezzanine, converting the loft space into bedrooms, also a en suite shower room and two toilets. The main changes to the outside were, the barn doors to be replaced , french windows, tiny windows enlarged to allow more light in, two doors to be blocked up, and a rear tiny window to be turned into a single glass door. The estate agent was English, and had his own building company, and was also an architect, he agreed to draw the house plans, and carry out major work in my absence.

Renovation in France has one major drawback, the lack of skips, you can’t get one in our area for love or money, so the answer seemingly is to bury it or cart it to the dechetterie (recycling area) in bags. Fortunately the local farmer, the French equivalent of Arthur Dayley, has a need for everything that is useless, the Pierre et Beton, and scrap metal, was manna from heaven, he even took the used sand that was left after sandblasting the Poutre, (oak beams). His English was none existent as was my French, but we managed strange conversations, I was asked to pile everything up outside, and he would take it away. So out went the old stove, bedstead, and loads of scrap pieces of metal, the old wood was next, and I later came to realize that was mistake, wood is needed for burning on the cold winters nights.The dividing Breeze block walls in the barn were smashed, messieur Penard took the pieces for some foundations he was laying, corrugated sheeting, loads of rusting old pieces of metal, went to has scrap metal pile to be turned into cash. We left for home after a couple of days, feeling very satisfied with the start we had made, and our new found friends from the hamlet.

Terry Ferdinand lives with his wife Catherine in the north east of England where he hosts a radio show. You can find out more about Terry’s radio show here Bishop fm.