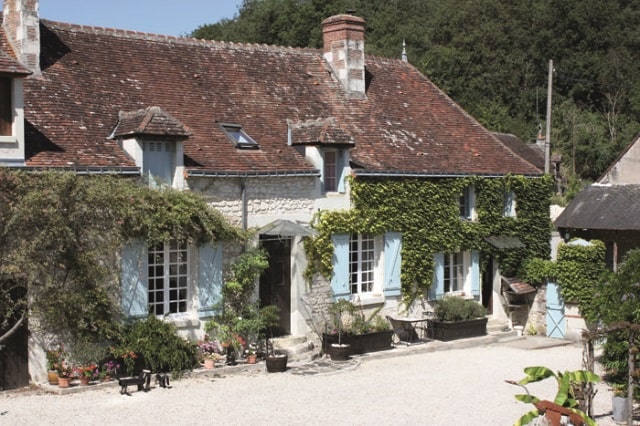 Kath Watson and Roger Prior almost missed their dream home. But now, after a major renovation to create two gîtes, they’re sitting pretty in Vienne. Nicola Venning finds out how they did it…

When Kath Watson and her husband Roger Prior were first handed the particulars of a rambling old farmhouse on the Loire/Poitou-Charentes border, they were convinced it wasn’t for them. If they hadn’t changed their minds and decided to check it out, things could have been very different.

The couple, who had spent over two years searching for the ‘right’ home and viewed more than 40 properties, had a clear idea of what they did and did not want. “It was not in a village, looked too large and had too much land,” says Kath. 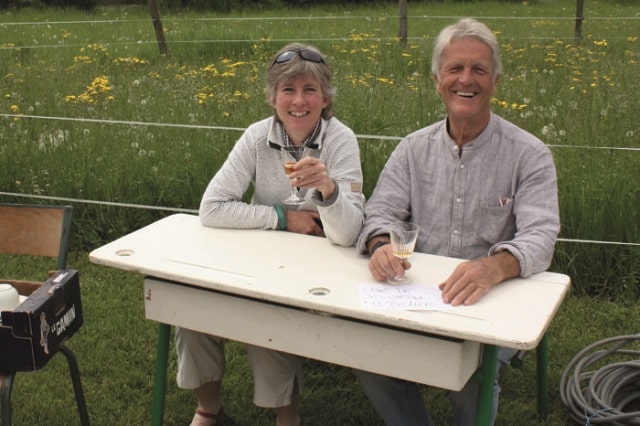 However when they actually saw La Belardière – an old stone farmhouse surrounded by a large walled orchard, an acacia wood and fields of sheep, sunflowers and wheat – they both knew they had found their future home.

Set in Vienne, near the Creuse river and surrounded by stunning countryside, the smallholding was “in the heart of rural France”, says Kath. “It was just lovely. You almost stepped back in time,” she adds. So, in 2008, they paid €350,000 for the old stone farmhouse near Saint-Rémy-sur-Creuse, which had 4.5 acres of land and two barns. Kath and Roger realised the extra buildings could help them create a small holiday lettings business – if they could be successfully turned into a couple of smart, holiday gîtes. 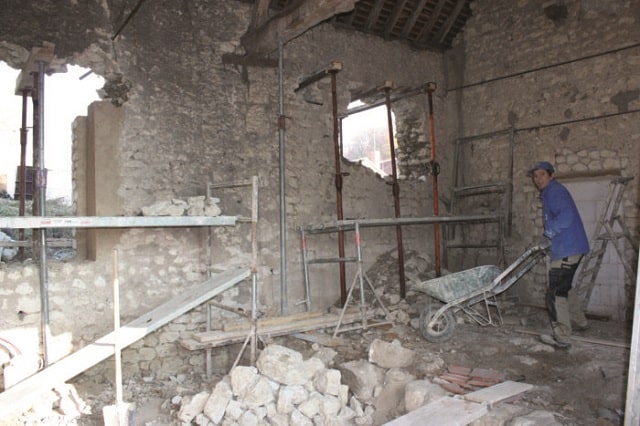 But it would not be easy. The rundown buildings were in very poor condition with soil floors and no windows, water or power. Neither Kath, who previously worked as a management consultant, nor Roger, a former doctor, had tackled a major renovation project before – but they were not deterred.

After visiting the local mayor and securing planning permission, Kath and Roger spent about a year deciding what they were going to do. First, they researched the holiday lettings market carefully, met local builders and had many painstaking conversations with their architect about the configuration and number of bedrooms.

“We wanted there to be lots of space,”says Kath. They opted to have fewer, but larger, bedrooms and added en-suite bathrooms to most of them. To cater for older or disabled guests, they built a bedroom and bathroom on the ground floors of both. Realising that the gîtes, which are next door to one another, would appeal to large families holidaying together, Kath decided to include a communal space that was “big enough so that everyone in both gîtes could eat together”. And so they created a very large kitchen-dining area in the larger gîte.

The building work started in 2009 and the couple hired local tradesmen to do the basic construction and plumbing. Once they had two solid, rebuilt shells, Kath and Roger set about turning them into their dream holiday lets. 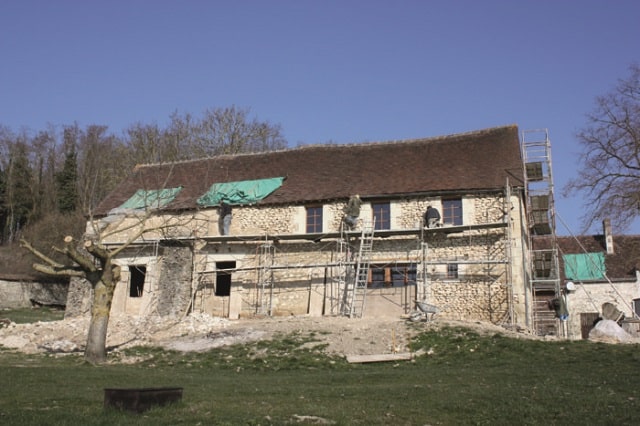 There was a lot of work to do. Together they put up all the internal walls including “450 sheets of plasterboard with 10,000 screws”, says Kath, who ordered the materials. While Roger did all the tiling and laid “really good-quality laminate flooring”, Kath “painted every centimetre of the renovated buildings”. She chose varying shades of cool white for the plain walls and ordered much of the paint from the UK as “paint in France is really expensive”. 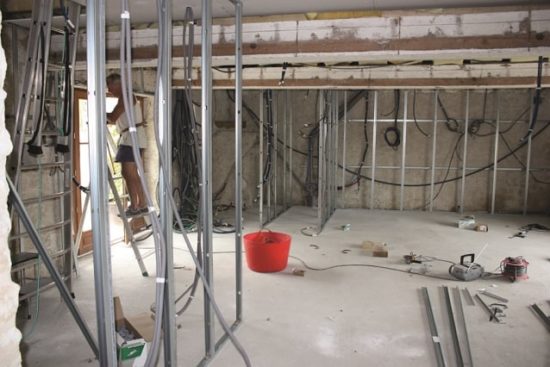 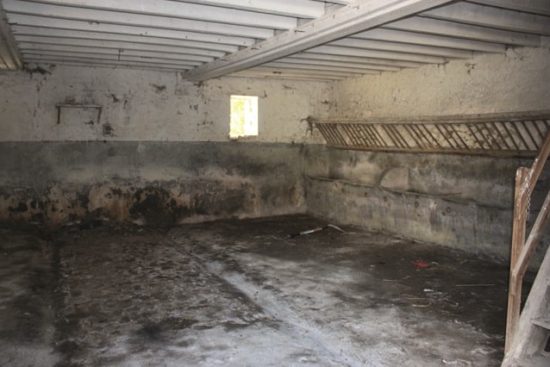 The next stage was to ensure they also felt welcoming and comfortable. Roger discovered his inner artist and transformed ancient tools and agricultural artefacts into polished (and often humorous) sculptures and innovative décor.

Old iron keys became a stylish faux wall clock. “It hangs on one of the big plain white walls in Le Verger and stands out quite well,” says Kath. Similarly three characterful, old shovels were hung on one of the large high walls at different heights. “It’s attractive,” she adds. “We get a lot of compliments.”

Battle of the Bulge

Le Potager was decorated in a similar bright and understated style, though there were challenges. Neither Kath nor Roger knew what to do with the large bulge in the living room floor, caused by the entrance to the vaulted cellar below. In the end, “Roger covered it in lime mortar and studded it with dozens of fossils found around the farm to create an interesting feature and talking point”, says Kath. 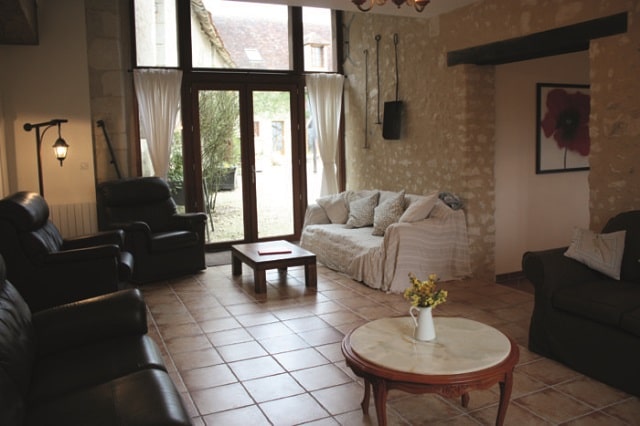 A disused wine press languishing in the barn was turned into a feature in the middle of the courtyard and enhanced with reclaimed beams and tiles. Next to it is a pond with a dragonfly made out of an old toilet cistern and bike chain.

When they discovered a stack of tomettes (local terracotta floor tiles), Kath decided to use them to finish off the window sills. “We varnished them and they look really lovely – though it did take a long time!”

One of the most impressive features can be found in the main bedroom of the larger, five-bedroom gîte, Le Verger (which means orchard). It has a ceiling that is almost four metres high and a beautiful, light, wooden beam in poplar. “It is a wonderful space. It overlooks the orchard, as well as the Creuse valley, so the views are fantastic,” says Kath. With high ceilings and simple white walls, the two gîtes – Le Verger and three-bedroom Le Potager (meaning vegetable garden) – feel light and airy. 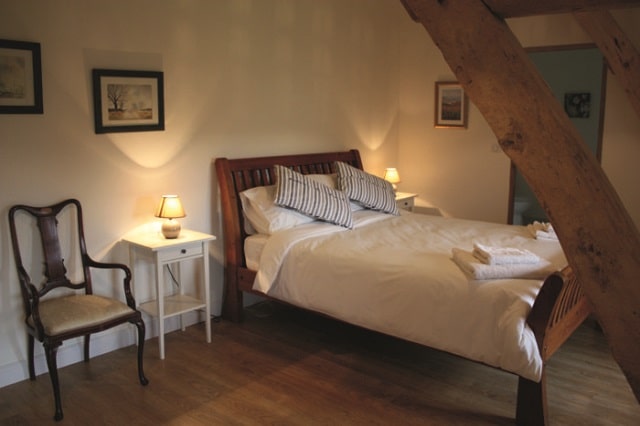 In contrast to the cool white walls, Kath and Roger decided to expose the mellow old stonework wherever possible. Combined with the woodwork and old beams, “the gîtes also created. Other sculptures include a swordfish and dachshund made from fire extinguishers and an old saw reinvented as a metallic owl that moves in the wind.

Furniture is expensive in France and the challenge was to stay within budget, “especially as we needed a lot”, says Kath. Fortunately, the couple had got to know people in their local area who were able to help. “We talked to a lady in the village whose mother was going into a retirement home. She had loads of really good furniture, which we got for a song.

“Much of it was traditional French style, including a beautiful ornate bed with flowers and lots of nice little pieces including tables and chairs,” she says. As well as sourcing furniture from local stores and antique shops, Kath also picked up good-quality modern “seconds” from John Lewis. “The gîtes are a mix of modern and traditional, which I think appeals to our British visitors,” says Kath.

Keeping the interiors simple, she bought beds, linen, towels and curtains from John Lewis, choosing a cream-and-white colour scheme. She estimates the restoration of both gîtes, including décor and furnishings, cost €250,000. 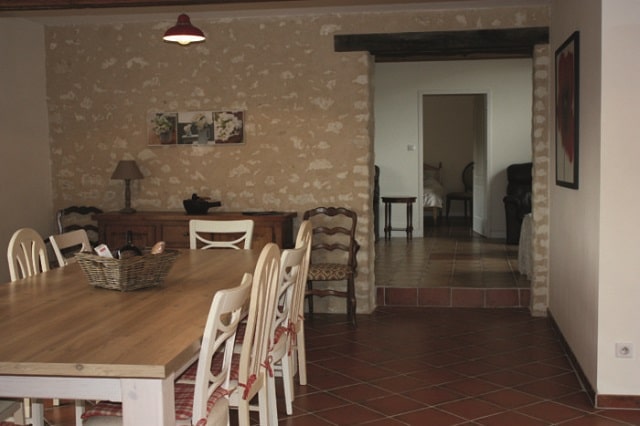 Fortunately, their own home, the farmhouse, did not need too much work and was less expensive to update. Kath and Roger replaced their dark kitchen with a lighter traditional-style one, painted the walls cream and exposed some of the brickwork. “We thought it was really French until a neighbour told us that it was an English person’s view of a French kitchen,” laughs Kath. “The French often say to us that it’s a good job that we Brits are around, because we do things so nicely with a lot of taste,” she says. Including a new bathroom, Kath estimates that they spent no more than £20,000 on the refurbishment.

During the renovations, an elderly woman, who had once lived on the farm, and her daughter, came to say hello. “The first time she visited, it was too painful for the mother to come in,” says Kath. “But she came back again and we had a long conversation. Five of her six children were born in the house and the family had been very happy here. 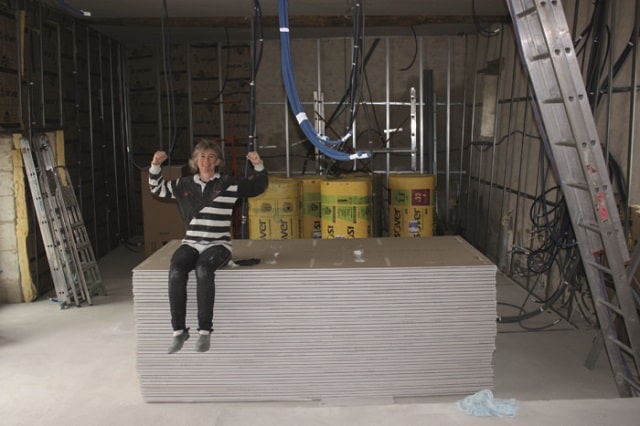 Roger and I felt a real responsibility for this building. We wanted to retain the essence of the farm and ensure they would approve of it but, at the same time, create something that would work for us.” Once the renovation was completed, Kath and Roger invited her and her family for a long weekend. Thirty people stayed – it was quite an event. “As you can imagine, it was incredibly emotional,” says Kath. “They absolutely loved what we’d done.”

We Say… “Vienne is a great place for a gîte business. The
countryside offers a retreat for those seeking peace, while there are
attractions such as bustling Poitiers and Futuroscope nearby.”