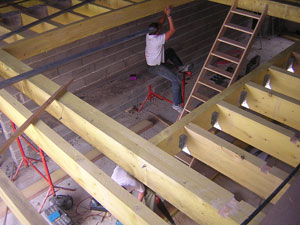 Another month of good progress in September! Last month you’ll remember we were putting in all the joists for the first floor, which was brilliant. The not so brilliant bit was that they lay in the opposite direction to those flippin’ tie bars that caused us headaches earlier in the project so we had to temporarily take them down. With all the joists in place I had the job of working along around 60 of them notching out a few cms in order to lay the tie bar in the recess. The idea being that they will then be hidden between ceiling and floor level. Actually, I quite enjoyed this job and it was a relief again to get the tie bars back in place, hopefully never to be touched again!!

Next the tongue and groove chipboard flooring went down on the first floor, and wow, what a difference this made. For a start I could stand upright for the first time in ages instead of crawling on all fours across the joists!! It has been great to finally get a feel for the space and to be able to picture rooms especially as we treated ourselves to a set of 40 euro stairs too so that we can admire our first floor in style! They do the job for now and make it easier than using a ladder when carrying materials up but I have to say I don’t have enough faith in them to stand on them at the same time as Stuart as he’s…ahem…a bit heavier than me! Screwing down about a zillion floorboard screws wasn’t much fun though – I’m not sure I’ll ever get a job now as a hand model unless I can be used as the ‘before’ with some miracle hand cream! 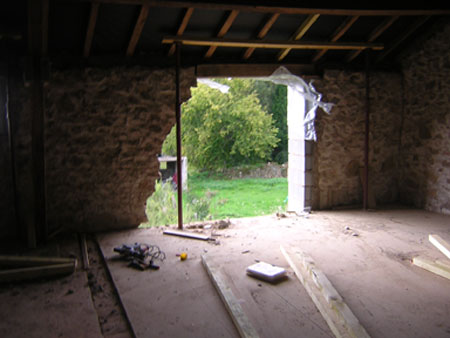 The next job this month has been to start cutting out the holes for the windows in the back and sides of the barn. The front ones are remaining as they are but we need to add a further 8 and make one larger. These all need to be prepared for 9th October when the technician from the window company is coming back to take final measurements. So far so good with only one hiccup you might say! The builders made a hole on the first floor which goes full height from floor to ceiling. Directly below on the ground floor we wanted to put in a new kitchen window which is not very high but is quite wide. Unfortunately this meant there was not a lot of stone work left between the 2 windows and as such when the bottom hole was being made it weakened the area that was left and it collapsed pulling down with it some of the prep work from the window above! 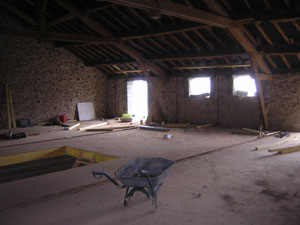 Fortunately no-one was hurt because although it wasn’t that big an area it does amount to an awful lot of heavy rock when the walls are half a metre thick! It looked a lot worse that it actually was initially because we suddenly had a huge hole on the back wall but in actual fact the majority was meant to have been removed! Gary and Dan did an excellent job in rebuilding it and strengthening it and although the boys might not agree as I know it wasn’t an easy job but I think it was well worth the effort as it now looks great with the extra window.

Moving on, we have also had an appointment with Veolia concerning our fosse requirements which all went as we expected so we need to proceed with that now and when we have 2 minutes to sit down and think about it we may well do so…!

We have also spent a great deal of time this month ordering and planning a few things as there have been some great promotional offers on locally. We have taken delivery of all the wood needed for the internal studwork, have bought our chauffe-eau and have ordered the external wall insulation. We don’t actually need these yet but it has saved us a small fortune by ordering while the promos are available!

Thanks for reading. A bientôt!