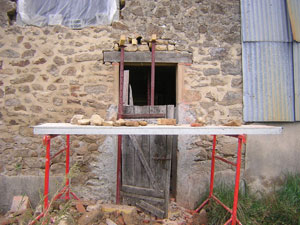 By early October the remaining holes for the windows were chopped out and this was one of those times when you really see things pulling together. The added light at the back of the barn makes a real difference and helps to identify the space in each room. There were originally two doors and one window on the back wall, each with arched brickwork over the top. We decided that rather than recreate this look on each of the five extra windows, we would remove the existing arches and have wooden lintels across all the windows and doors, especially as one of the archways was already in need of some repair work. Removing the arches was not an easy job in itself for the builders as there was a risk that the stonework above could collapse. To minimise the risk they made various supports to brace the stone which worked brilliantly. No stonework collapsed and the new lintels look really good. With the preparation work done, the window company came to take final measurements and we have been promised windows and doors by the end of November/beginning December. I can’t wait for this as they‘ll transform the look of the building from a barn into a house at last! The block walls have been continued up on the first floor in preparation for the joists which will provide the floor for our loft space. In doing this we had to make some final decisions about where all the bedroom and bathroom doors would be positioned. Until you start on a project like this you don’t fully appreciate how far in advance you have to think. Here we are in a barn with no windows or doors and yet we have to decide now where we might want to put cupboards, beds and toy shelves etc because the positioning of the doors will obviously affect the layout of the rooms. Hopefully we’ve made the right decisions…!

We have been to the local wood yard and bought all the joists for the loft area and the mezzanine levels. We also bought the chevrons which will form the basis for our ground level flooring. For the those of you who were reading back at the beginning of this project, you might remember that we really wanted to have a polished concrete floor. Unfortunately we’ve had to abandon this idea as after extensive research we just can’t find anyone who can do it around these parts. It’s too large an area to try tackling it ourselves so we have accepted that we’ll have tiles or wood instead. I know it will still look fantastic when it’s done but unfortunately for me this is now going to be second best but never mind, it has advantages in that it will be a warmer floor.

We have decided to put in 40mm of compressed polystyrene between each chevron and then lay a chipboard flooring on top. Having decided all this (which took a long while and a lot of changing of minds), the work is underway to lay all the chevrons. This again is no easy task, firstly, because as is typical here in France, the timber that should have all been cut to the same dimensions of course wasn’t, and even though it might only be a couple of mm out, over a long distance soon turns into cms. Secondly, as we had planned on having a screed for the polished concrete finish, we hadn’t levelled the concrete base to absolute perfection – we didn‘t think we needed to! It is more or less level so isn’t a big problem but it does mean laying the chevrons is more time consuming as they need packing out in places to keep them level.

Billy has even been over with his tractor this month to chop down the field. As much as we tried strimming and chopping we just weren’t getting anywhere, partly because it was extremely overgrown by this point but also the lack of time as obviously the barn has to be the priority.

We have also done a fair bit of research this month into what system of heating to opt for. I think we have finally decided our preferred choice is the reversible heating system that doubles up as air con (not that we’d have used it this year!). It seems to suit our needs and so we have contacted various companies and are now awaiting several quotes. We have a chair ready as we know it’s an expensive system! If anyone has any advice or experience of this we’d love to hear from you before we need to make a decision in the next couple of weeks.

And finally, the sale of our house went through and so we have also found (or squeezed in) time to pack up and move out! It has been another busy month (with yet another half term thrown in) but more and more it all seems to be coming together so we know it’ll all be worth it in the end!

See you next month!