Diary of a Corrèze Conversion – Part 1 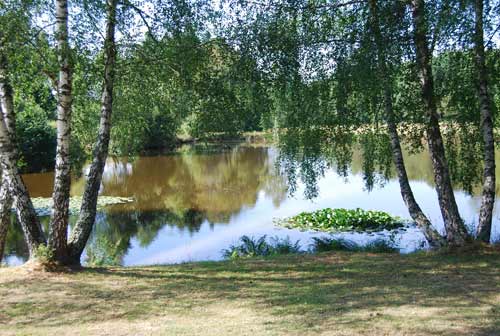 Setting up a cycling business in Limousin from scratch

Our story starts in the usual way with many family holidays in France ending in the conversation ‘wouldn’t it be great to sell up and move to France?’.

In the summer of 2007, we spent a week in Corrèze, another in Brittany and returned home to work as usual. On the first blue Monday back from holiday, my business partner unexpectedly asked whether we could sell the commercial property where we ran our interior design business, to pay off his personal credit card debts – how I now thank Barclaycard and Access…… My husband James was fed up with his financial analyst job and had been feeling overworked and unappreciated for years.

Our boys, Will and Ben, were still young enough at 6 and 10, to move schools relatively easily. So the scene was set for a repeat of the ‘living in France’ conversation, which ended up with the business being sold and our house in Surrey on the market.

In February 2008 we found ourselves in Corrèze for a second time, but this time we were house hunting. Corrèze had made a big impact on us the previous summer. The countryside had reminded me of the Surrey Hills where I had spent many happy years riding around on horses.

The kids had enjoyed all the open air and activities, and James had raved about the quiet roads and challenging gorge climbs of the Dordogne valley, which were perfect for his road cycling passion. Having decided to just go with the flow of events that seemed to be happening, we felt that Corrèze had been chosen for us and we had better not question it

We had formulated a plan for making a living based around running Cycling holidays in the Limousin, and this informed our property search. I had seen hundreds of properties on the web, but we wanted something with outbuildings that could be converted to guest accommodation and also a reasonable amount of land. The land was the harder thing to find. We narrowed down the search and saw just 10 properties on our trip including a stunning chateau with a Napoleonic wing. We had also been looking for some time at the pictures of a small property in Espagnac. The house was small, with a pretty bread oven and barn, but what really attracted us was the beautifully landscaped lake.

I can’t say it was love at first sight with the house but the lake was stunning. The house was liveable, the barn could be converted for the guest rooms and we could build an extension between the house and barn for a new kitchen and guest dining room – easy…

Our first offer was accepted, and in July 2008 we found ourselves waking up in a house in France surrounded by boxes. It was quite surreal and we veered from giggling hysterically to looking at each other and saying ‘Oh no, what have we done??’

As time was of the essence, we tried to keep the momentum going by meeting up with local architect Jean David Diemoz to begin drawing up the plans. This of course was held up by unpacking, the August holidays and the fact that Jean David had just had a new baby and was in that grey area of total fatigue that you get as a new parent. We were also inundated with visitors from the UK and only spent 3 nights alone in our new house in the first 8 weeks. 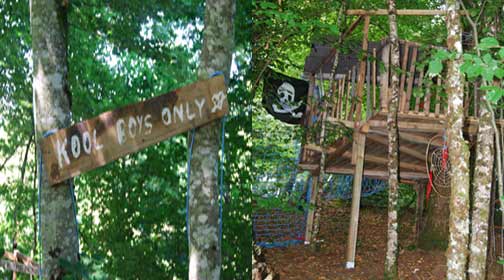 We did however complete our first build project, a treehouse for the boys, which had a solid base constructed from pressure treated timbers, and the top constructed from oak recycled from wood found in the barn. 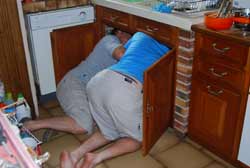 There were also many small projects keeping us busy including replacing the kitchen tap, which had, one day unexpectedly detatched itself from the sink leaving a plume of water shooting into the air. My husband and nephew then spent hours trying to fix the pipework of a shiny new tap into elderly fragile pipework, which collapsed when it was cut. The shiny new tap then broke leaving us with no water for 24 hours – the moral of the story is never cut your water to do a fiddly job on a Sunday morning, when all the shops are shut!

September came with the Rentrée and we packed the kids off to their new schools with some trepidation and knuckled down to some real planning. Jean David the architect arrived and after a lot of measuring, and a visit from a geometrist, who surveyed all the terrain and established exactly the topography (ups and downs) of the site, he came up with the first set of plans.

The main issues facing us for the extension were the three metre boundary rule (no building with windows to be within three metres of the boundary, even if it is only miles of fields on the other side) and the changes in level between the house and barn.

We also needed to consider disabled access in order to get planning permission, even though we did not anticipated hosting many disabled cyclists. ‘I was inspired by the Sydney Opera House’ he said when we visited his atelier in Brive la Gaillarde. Indeed he was and we loved the design, a set of graceful interlocking spaces with the roofs, seen from above, curving around between the existing buildings in the shape of the Opera House.

From that moment on there was no going back to a prosaic rectangular style building although I had some reservations about the size of the interiors.

It is very easy to get carried away with a plan on paper without thinking of the long term practicalities of a design, and when I prepared some scale plans of the interior and planned where kitchen units and a guest dining table would fit, my apprehension was justified. The kitchen was tiny with almost no storage space and you could only have fitted in a table for 8 people. In the barn there were 4 bedrooms and two bathrooms. As we were planning to cater for 10 on a half board basis, the design was a untenable, so it was back to the drawing board. David was very happy to change the designs to suit our needs, and the process really clarified our thoughts as to what we wanted for the business.

The second plan arrived with 5 ensuite bedrooms in the barn and a huge kitchen and entrance hall which would double as a guest dining room in wet weather. The scene was set, we had the basis for the design, all we now needed was to winter proof the house, convert the loft into a new master bedroom suite, and wait for planning permission…

You can read part2 of sam’s story here