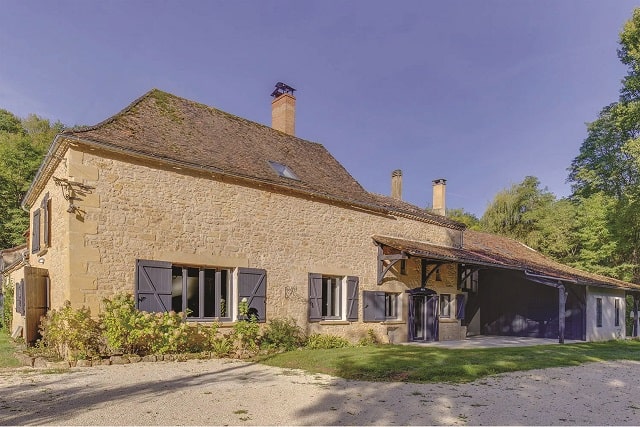 Restoring a derelict paper mill in Dordogne would terrify many; yet the Randalls have not only tamed this property, they’ve transformed it into a stunning luxury residence. Greg Cook gets the grand tour…

It’s becoming an established fact that the particular type of sunshine found radiating upon the Dordogne has a truly befuddling effect on the most pragmatic of Britons. Recent evidence to support this case can be provided by Rebecca Randall, a criminal barrister from London, and her husband Greg, a former City worker. 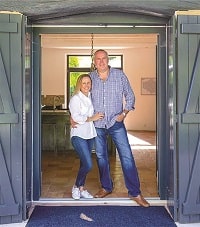 Whilst looking for a potential new home in the region back in 2016, the couple’s local estate agent directed them to Fontalbe, a “characterful property” that turned out to be a large, abandoned paper mill crumbling into the bottom of a small valley just outside the village of Saint-Avit-Sénieur.

Having clearly stated in their search parameters that they were happy to undertake “a little painting and decorating, but no major renovation”, the couple visited the dilapidated building one drizzly afternoon and dismissed it out of hand. However, after a glass or two (or, as Rebecca freely admits, “a glass too many”) of the local prune liqueur later that evening, conversation turned to the fabulous potential of such a property, should anyone be brave or foolhardy enough to embark on such a mammoth project.

Deciding to give the building a second look to fully satisfy their curiosity before moving on, Greg and Rebecca returned to the mill the next morning. Birds trilled in the treetops, the little river babbled its way past the mill’s edge, the perfectly warm sunshine of mid-spring in the Dordogne shone upon their faces and lit up the mellow old walls of the mill… And in that moment the couple were on their way to becoming the proud owners of 6,000m2 of derelict stonework sitting in a generous 16 acres of overgrown grounds surrounded by woodland.

Over the following summer months the sun’s effect showed no sign of abating, and by September 2016 Rebecca and Greg were officially in possession of a building with no internal walls, let alone bathrooms or a kitchen… In fact, such lavish mod cons would turn out to be years away. The more pressing matters to address at Fontalbe were the fact that the building had only limited electricity and no mains water supply.

“The place was huge, slowly falling down, and over the past few years there were times when we genuinely thought it was going to beat us,” Rebecca explains, the recollection still creating a frisson of genuine alarm in her voice. “In fact, we had no idea exactly how big the place was because most of the flooring inside wasn’t actually safe to walk on. One of the first things Greg did here was fall down a hidden well – which we’ve preserved for posterity in the room that’s now become the kitchen. It’s probably been for the best that we had no real concept of the scale of the project we were taking on. But not everything was against us. We found an amazing architectural designer, Joris Van Grinsven, and an equally wonderful team of builders who lived here on-site and worked tirelessly for months on end to bring Fontalbe back to life.

“When Joris, a man not noted for emotional outbursts, first arrived here to look around he actually let out a squeal of delight. Obviously, he got the job right then. I dread to think what the rest of our friends and family said out of earshot, having come here when we’d just made the purchase, but I can make a good guess.”

Regardless of anyone’s misgivings, the couple went all in. They continued to work in London, spending everything they earned on the project, until they sold their comfortable home in the leafy north London suburbs in 2018 – and spent that money too. 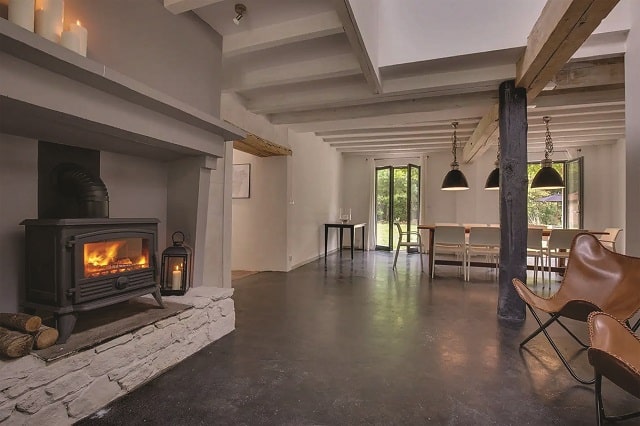 “We bought a caravan and towed it down here to live on-site, all of which is an experience I never want to repeat,” Rebecca says with heartfelt vehemence. “I tried to persuade myself it would be a Swallows and Amazons-style adventure, but in the depths of winter it was simply grim. Greg is 6ft 4in – the toilet/shower cubicle wasn’t.” On the other side of the caravan door, the battle with Fontalbe was in full swing.

This grande dame of a building, woken from slumber, had decided to behave in equal parts like an irascible old lady and petulant child.“For many months, a perpetually drained bank account and sleepless nights became the norm,” she goes on.

“It felt like every time we set foot here there was another cheque to write, for another unforeseen eventuality. No job, however seemingly easy or straightforward, went to plan. Even the smallest task – something you think will take 10 minutes – turned into an epic struggle with concrete, mud and machinery, ending in swearing, sighing and cut fingers… and wine. You’d imaging putting up loo roll holders would be a bit of DIY most people could manage,” she continues, “but not at Fontalbe. Out of seven holders, five hit concrete, two went straight through plasterboard. Ditto curtain poles. How hard can that be?

Apparently very hard in a 17th-century mill where every single window is a different height, the floor slopes and where you have to drill through ancient stone. A particularly special moment came when Greg shot backwards after drilling through cables cunningly hidden behind render.” 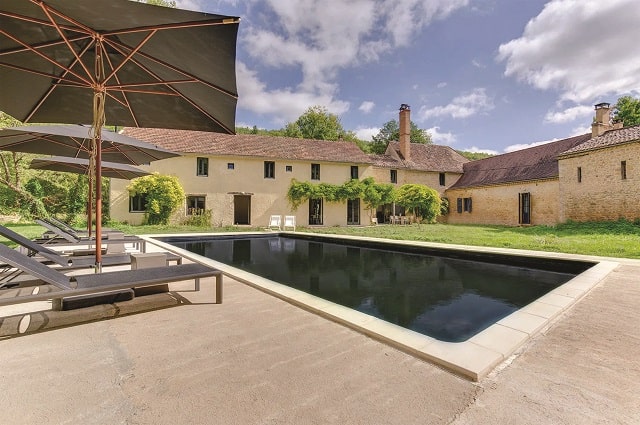 A New Lease of Life

“Another memorable episode occurred when we had to have two new septic tanks dug in. You know it’s not going to be good when your usually unflappable builder announces ‘un grand problème’. It transpires that in one of the mill’s earlier incarnations it had become a trout farm, and what we had innocently assumed would be our main lawn was actually an area above a subterranean honeycomb of giant holding tanks for fish. By the time our workmen had subtly established exactly what lay beneath with a pneumatic drill, it looked like the grounds had been attacked by a giant, psychotic mole.”

Despite setbacks and challenges – large, small, anticipated and surreally unexpected – the 17th-century mill gradually succumbed to its change of purpose. And the new lease of life it has been given is a joy to behold. With the assistance of their inspirational designer, Joris, and an utterly dedicated building team, the transformation Rebecca and Greg have wrought upon this vast stone building is spectacular.

All the internal spaces are dramatic in their proportions, with a vast kitchen, grand dining room, and a main salon/living area that Rebecca is confident could easily accommodate a good 150 people for a party. There are six bedrooms above, an equal number of luxury bathrooms, and even a separate gîte available for rent, allowing a select few visitors to enjoy the period splendour and bucolic surroundings without an inkling of the squalor or stress that foreshadowed them. 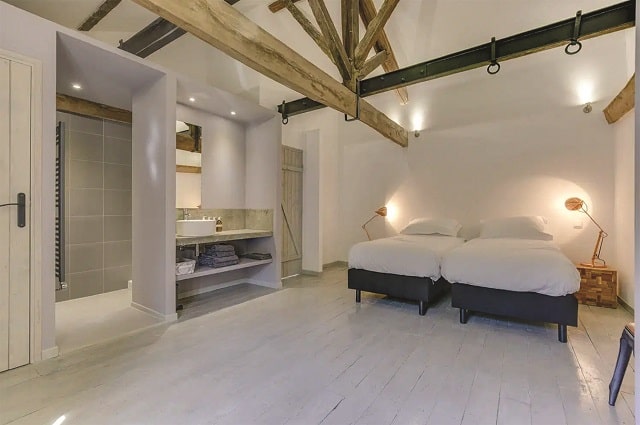 One of the renovation’s most impressive aspects is the understated aesthetic that’s been applied to the décor throughout the mill. Contemporary and minimal, rather than detracting from this grand period building, the style actually serves to bring Fontalbe’s stunning period features (now lovingly restored) to the fore.

Ancient beams and old fireplaces (complete with newly-installed wood burners) are complemented by pale off-white walls that let the light reflect through the many new French doors (not to mention an impressive 55 replacement windows), and the tastefully modern furniture, fixtures and fittings have been meticulously chosen to enhance the character of the building.

Outside there’s a new luxury pool, but beyond that, the bird song in the wooded valley, the wild deer roaming the old orchard and the burble of the passing River Couze remain just the same. “I’m relieved and delighted to say that we’ve been heartily welcomed by the community here, and Fontalbe finally did us a favour, in so much as being recognised as ‘the mad English couple at the mill’ certainly helped break the ice,” Rebecca laughs.

“After only a year and a half of being here full-time, we can both say with hands on hearts that we wouldn’t want to be anywhere else. The countryside is sublime and the surrounding villages and towns are picture-perfect, with some of the best produce at the market we’ve ever tasted and some local restaurants where we’ve enjoyed some of the best meals we’ve ever eaten.”

So while Rebecca and Greg have, both literally and metaphorically, been put through the mill by this extraordinary renovation, the good news is that, having made it through to the other side, there’s nothing but Dordogne sunshine.

To find out more visit www.fontalbe.com

Check out our wide selection of tools to help you complete your renovation projects, including power tools, hand tools, measuring equipment and tool storage. Delivery to France in 3-5 working days.