David and Pam Tillotson are aged 66,( “hopefully young for our age!” they say!). David has been a hide and skin merchant for 30 years and they now sell tanned and raw hides and sheepskins. ( I bought one, really lovely, it’s now in Normandy. They have a website www.floorhide.co.uk for info! – Gaynor)

When did you buy your second home in France and why?

We bought our first ‘maison secondaire’ in 1989. An old farm house in the Vendeen countryside.We had always liked holidaying in France and used to take our children and caravan to Normandy and Brittany in the 70s. The price of property in France was so reasonable at that time that we decided it would be a good idea to buy a permanent ‘holiday home’.

Our first house bought in 1989 was a old farmhouse with a very large ‘grange’ and ‘dependances’ which was high maintenance both in money and in time and as time went on I worried about the amount of time Dave spent mending the roof of the barn! We reluctantly decided we would have to look for something a little easier and in 2000 we bought a more modern house (as we are not as young as we used to be!) again in the Vendee. It is a typically Vendeen style of house, white walls, red tiled roof, and on one level. 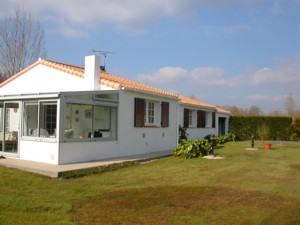 Our new house is nearer to the coast, i.e. 10 kms. inland from St. Gilles Croix de Vie. It is in a rural area in what is known ”as ‘le marais’ . The house was built about 30 years ago and extended and updated 10 years ago to a 3-bedroom bungalow. We have a garden of .25 hectares surrounded on three sides by ‘un etier’. (Canals dug during the Middle Ages and later by the monks of the region) We have a verandah – where we spend most of our time – a cheminee, ‘American cuisine’ (as they call it) central heating, etc. In brief all mod cons. And lovely high wooden ceilings.

How much time do you spend there?

What is the best thing about owning a house in France?

The best thing! Wow there are many! WE JUST LOVE IT!!! The peace and tranquility, away from the stress of business and the stress of traffic in England.

What is the worst thing about owning a house in France?

The worst thing! The cost of getting there!

What is one bit of advice you could give other prospective second home owners in France ?

Advice – If your prospective property is old have it surveyed! This is not normal practice in France but with all old buildings it can save a lot of heartache and expense.

You seem to have a good work/life balance Pam and David!