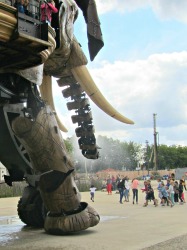 If Nantes is known for one thing nowadays, it’s the giant mechanical elephant that since 2007 has roamed the old shipyard on one of its remaining islands. But the same city was known as ‘the Venice of the West’ when the River Loire made crossing the street impossible in places – unless you had a boat. Eleanor Fullalove explores the islands present, past and presque…

In a workshop where they used to build ships on the Ile de Nantes, something else is taking shape. As if to prove the point, a prototype opens its beak, spreads its wings and whisks two ‘machinists’ into the air and over my head. They’re a bit like mad professors, the ‘machinists’ who work for Les Machines de l’Ile, the company that also brought ‘Nellie’ outside to life. 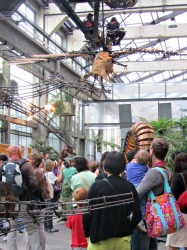 The huge wooden heron will be part of the Heron Tree project still in development (lift off is scheduled for 2014) but in the meantime, Les Machines de l’Ile has just unveiled its long-awaited Carousel des Mondes Marins or Marine Worlds Carousel as part of Voyage à Nantes – a summer long campaign by the tourist board to open the eyes of residents and visitors to the city and what makes it stand out.

The carousel on the Ile de Nantes turns on three tiers and at 80ft is twice as tall as the elephant. It was inspired by Jules Verne, who wrote Twenty Thousand Leagues Under the Sea. He was born here in 1828 and lived to 77. But looking around at the packed carousel, I had to agree with Katia from the tourist office who was queuing with me for the Lanternfish… “Jules Verne is not dead after all!” 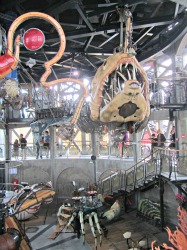 Up here on the second level, fish like the Manta Ray and Piranha swim round and round with bellies full of boys and girls, mums, dads and grandparents – all keen to try this new toy. Below us is a veritable platter of crustaceans on the sea bed whilst at the top of the carousel you can survey the old shipyard from on high and watch ‘Nellie’ squirt screaming children from the safety of a turtle’s back or a little wooden boat.

That gentle giant has it all on the island: plenty of attention, space to stretch its legs for 35 minutes at a time and every opportunity to blow its own trumpet without fear of upsetting the neighbours! The only other permanent residents are two Titan cranes – one yellow and one grey, both now retired from the shipping industry and enjoying ‘historical sight’ status amongst landscaped gardens. 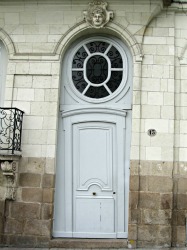 Venice of the West

Coming up for air after my journey into the marine world, I wonder if I’m still feeling the effects. Some of the buildings on Quai de la Fosse on the other side of the river actually look like they’re leaning… A figment of my imagination, perhaps? Apparently not. There used to be many more islands in Nantes, until the canals that gave the city its nickname ‘Venice of the West’ were filled in with sand.

Houses on nearby Ile Feydeau – which as its name suggests used to be an island – were snapped up by rich merchants. They were built on stilts, but still began to sink. At least they are safe now… if a little lop-sided. I think I’d like to live here in one of these limestone townhouses with their elaborate wrought iron balconies and masks (mascarons) over the windows and doors. 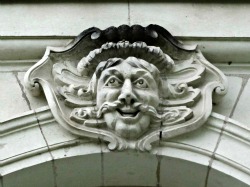 Of course, mascarons and macarons are not to be confused – they are two completely different things. That said, chocolatier Debotté on Rue des Hauts Pavés makes chocolate mascarons as souvenirs. I bought a box for later with a bag of berlingots (brightly coloured boiled sweets from Nantes) to keep me going. If they’d have had a traditional gateau Nantais with rum on the counter, I’d have asked for one of those too!

Houses have been built and streets have been laid where the River Loire once flowed. Even the tram line follows its old path. The city centre is criss-crossed by trams and has been since the Eighties. You can stop right outside the Château des Ducs de Bretagne, the moated castle where the Duke of Brittany lived when Nantes was considered capital of Brittany (it has since been assigned to the Pays de la Loire). 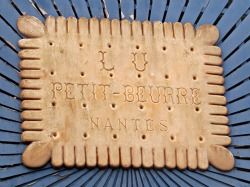 Francis II, the last Duke of Brittany is buried with his wife Marguerite de Foix in the gothic Cathédrale Saint-Pierre-et-Saint-Paul de Nantes. As for the château, it houses a museum dedicated to the city’s maritime history.

Over 40% of the French slave trade can be traced back to Nantes and the low-lit exhibition showing how these slaves were transported by boat, traded for arms and treated by slaveholders feels suitably sombre.

Later, it was another activity that put Nantes on the map. Its petit beurre biscuits are famous all over France and were invented here in 1886 by Louis Lefèvre-Utile, Mr LU! The old LU factory is easy to find with its distinctive blue and pink tower. Production has shifted out of town, but the building is still in demand, comprising a bar, restaurant, book shop, spa and entertainment venue.

Thanks to the tram and the growing number of pedestrianised areas in Nantes, the city is set to receive the title of European Green Capital next year. But it has another claim to fame. Its shopping arcade, Passage Pommeraye, has starred in several films, including Jacques Demy’s Une Chambre en Ville in 1982. A grand central staircase, flanked by Renaissance style sculptures and boutiques including Hermès, links Rue Santeuil and Rue de la Fosse. 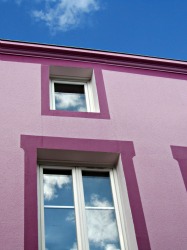 If the city itself has lost some of its island ambiance, the fishing village of Trentemoult (opposite the port) has a certain air. about it.. The Navibus cruises back and forth between the village and mainland Nantes all day. In just minutes, a view of the village’s quayside is clear. Sailing boats are parked like cars on the water’s edge and in front of the pretty pastel properties is a welcoming committee waiting for the boat back.

When I arrive, it is early evening or l’heure de l’apéro and the terrace attached to Restaurant La Civelle is filling up. Behind it, the maze of streets look as lively in their own way. Children are playing, cats are sunbathing on balconies, gardens are bursting with exotic blooms brought back by mariners and there is a tinkle of jazz in the air…

Turning back towards the river, I can see a band has attracted the attention of everyone eating and drinking outside. The only thing that can distract me is the glacier shutting up shop as the boat comes back to get me. So it’s with an ice-cream in hand en route to Nantes as I know it that I reflect on the fact that without the comparisons with Venice, Nantes has a character all of its own and there’s all sorts going on.