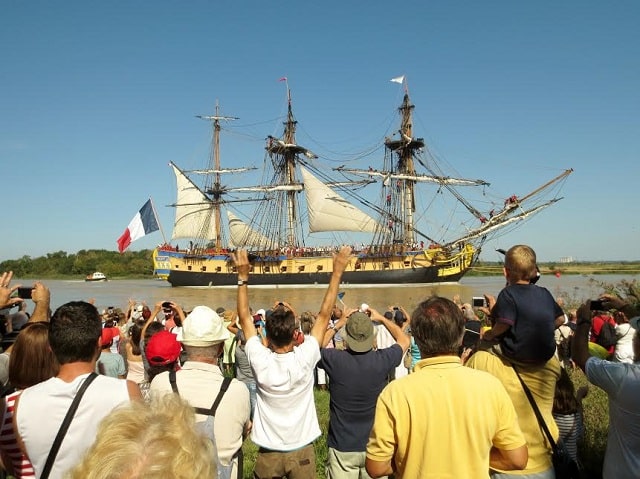 On Sunday the 7th September 2014 under the scorching sun of an Indian Summer an estimated 50,000 people gathered in Rochefort on the banks of the River Charente. The long anticipated event that drew them there was the departure of the iconic frigate Hermione leaving her home port for sea trials off the Atlantic coast.

The previous night, and with some difficulty, she was towed out of the dry dock where over the past year she had been finally fitted out with masts, rigging and sails. The departure point was Rochefort’s commercial docks where she cast off for the trip down the Charente to the open sea.

The crowds massed along the tow path cheered, waved flags, clapped and threw hats in the air as Hermione gathered pace. The emotion felt by the onlookers was almost palpable; many having followed the beautiful vessel’s construction over the past seventeen years. They were rewarded with a twelve gun salute from the ship’s cannons, fortunately firing blanks. With helicopters droning overhead and accompanied by a flotilla of traditional wooden sail boats Hermione passed majestically under the 19C transbourder bridge and down into the estuary to drop anchor off the Ile d’Aix.

The 21st century Hermione is a full size replica of the original frigate constructed in Rochefort’s Naval ship yards in 1778. Her historic importance stems from the event that arose two years later when in March 1780 she left Rochefort on a secret mission that was to culminate in Boston, US. On board her was a contingent of French troops led by the 23 year old General Lafayette whose orders were to support General Washington in his campaign against the British. 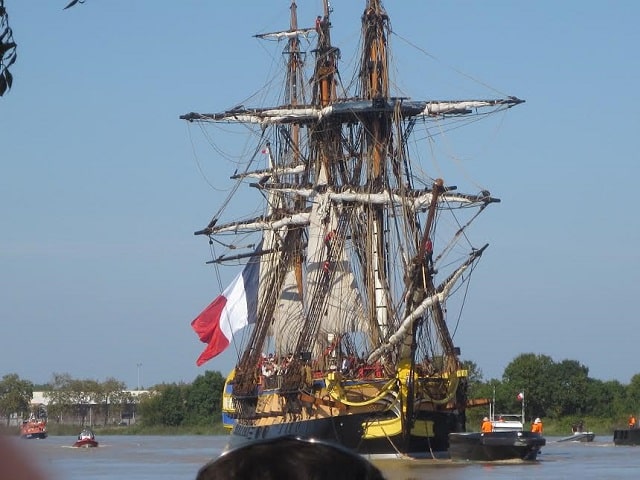 The contemporary Hermione dates back to 1997 when a group of enthusiasts thought it would be an exciting project to build a replica of an 18C frigate using traditional ship building skills and techniques. Since that date, when the keel was laid, 3.7 million visitors have gazed in awe as the vessel has taken shape. In 2012 the bare hull was floated and towed up river before another huge crowd of fans.

Hermione will now undergo sea trials whilst her young crew get stuck into developing 18th century sailing skills and racing up and down kilometres of rigging. After calling in at Bordeaux she will return to Rochefort for further fine tuning then in April 2015 set off across the Atlantic; destination Norfolk, Boston, Baltimore and New York.

If you haven’t yet seen this superb ship put a date in your diary for August next year when Hermione is scheduled to return home to Rochefort.