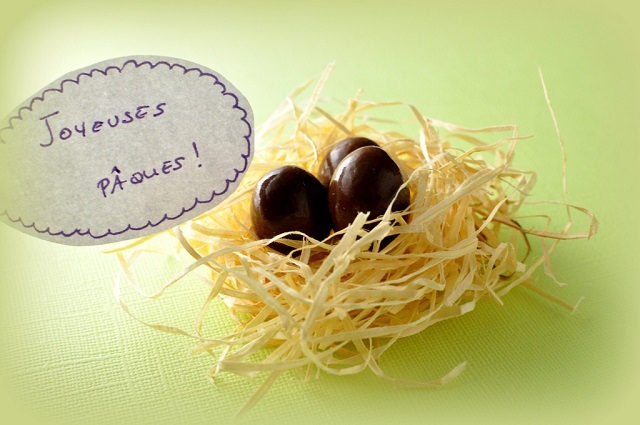 Across the Channel, chocolate eggs are only as popular as chocolate fish and bells, as you may have noticed from the displays in shop windows and supermarkets between March and April. But how do they fit in with this festival?

By March/April, there is usually an aisle in most supermarkets in France dedicated to Easter chocolate. But as the French have the option of buying theirs in a chocolaterie the choice available in their supermarkets is generally smaller and goes on sale much closer to the day.

As well as chocolate eggs of all sizes, chocolate bunnies, chicks and hens, there are certain Easter novelties, such as chocolate fish, or ‘friture’ and chocolate bells that you never really come across in other countries.

The hollow chocolate fish are often filled with friture – a mixture of little chocolates shaped like seafood, including: mussels, oysters and prawns. Praline filled friture is not unlike the Guylian seashells you are probably more familiar with. You can also buy friture in bags.

Of course, the fish symbol is one that we associate with Christianity and as Easter is such an important event in the Christian calendar (believed to be the day Jesus was resurrected) it should perhaps not come as such a surprise to find them at this time of year.

In France, bells too are immortalised in chocolate of various kinds, especially for Easter. Tradition dictates that church bells are not rung on either Good Friday or Holy Saturday, which follows it. Legend says that the reason for this is because the bells went to Rome to bless the Pope and returned, loaded with eggs, on Easter Sunday. The eggs were then scattered in gardens, which explains why Easter egg hunts tend to take place outside in the garden!

So if chocolate fish and chocolate bells seemed unconventional at first, we think you’ll now agree that they are both as much a part of Easter as the chocolate eggs you are more used to eating.