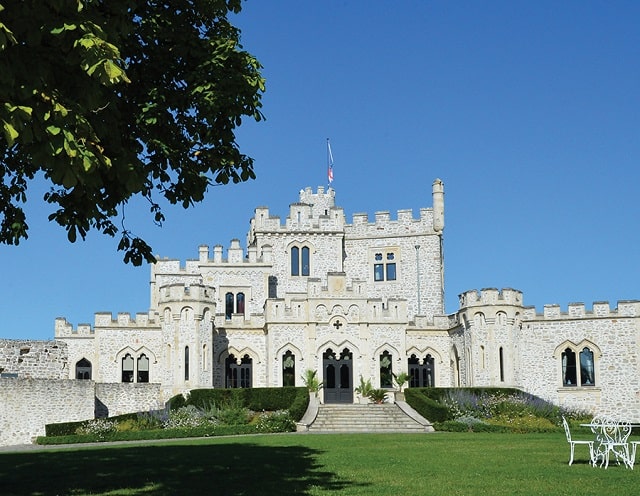 The Château d’Hardelot has been  a cultural seat of Franco-British relations since the 19th century. The neo-Gothic manor tells the history of the relationship between France and Britain since the time of William the Conqueror, through the individual stories of English landowners who chose to live in this area  of France over several generations.

Each part of the house is decorated in Victorian style – from the living and smoking rooms to the library and private wings – and embellished with period furniture and art on loan from the Musée  du Louvre and the Mobilier National. The on-site ‘Entente Cordiale’ centre, managed by the Pas de Calais département, helps to develop cultural links between France and the UK through shared history and art.

There are several options for discovering the Château d’Hardelot, including self-guided visits and themed trips. The castle is open from Tuesdays to Sundays and guided tours take place each weekend, which are highly recommended for a well-rounded understanding of the site. They not only reveal the secrets of the castle’s history but also divulge a host of anecdotes concerning the numerous connections which France and Britain have shared over the centuries. Each Sunday a themed tour takes place, focusing on a specific aspect of the castle – these range from history, nature and culture, to gardening and geography.

The great soprano Felicity Lott described the Midsummer Festival, which has been held at the Château d’Hardelot since 2009, as “a warm welcome, a meeting place for artists and the public” and admitted that she was “overwhelmed”.

The festival, which is held in a temporary theatre, is an exceptional event that’s dedicated to strengthening the ties between France and Britain through concerts and operas. It takes place  between June 19 and July 5 each year.

Over the summer months, the Château’s ‘Summer season’ offers visitors a multitude of family-oriented activities, such as workshops, storytelling and concerts. Starting in 2016, the summer programme will be extended year-round, with its primary focus remaining on celebrating and deepening Franco-British relations.

The Opal Coast, where the Château d’Hardelot is located – halfway between Calais and Le Touquet – is just a stone’s throw from the Grand Site des Deux Caps (‘Two Headlands’) and five minutes from the Hardelot-Plage golf course.

Nestled in the heart of a stunning natural environment – between the sea, forest and Condette Marsh reserve – the Château’s landscape charms each visitor, welcomes amateur walkers and experienced hikers alike, and the medieval walls make it a  true haven for local species.

A pseudo-Elizabethan theatre is currently being built in the shade of the castle ramparts and is set to open in spring 2016. Supported by the work of the Entente Cordiale cultural centre, its construction means that next year will see a year-round cultural events programme. The project has even received the approval of Her Majesty Queen Elizabeth II!

A large exhibition gallery will also be opened in 2016, to display internationally renowned art works. Temporary exhibitions will offer fresh perspectives on aspects of Franco-British links throughout the year.