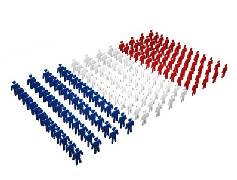 The figures from official statistical department INSEE also show that while slightly fewer people were born in France than the previous year – 816,500 against 830,900 – the birth rate is still well up on the average over the last 25 years.

The average age when a woman has a baby is just under 30 years of age. France is one of the most fertile countries in the EU, with recent policies aimed at boosting fecundity.

Interesting, in 2007 just over half of those births were born outside of marriage – a slight increase on 2006.

Nine out of ten women continue to work after having a baby.

The French are living longer too, with the average life expectancy of a boy born in 2007 being 77.5 years, and that of a girl being 84.4 years. France has one of the highest life expectancies in Europe.

The most recent immigration statistics – 2006 – show that in 4.9 million foreign-born people lived in France – about 8% of the population which puts it on par with the UK and Germany.