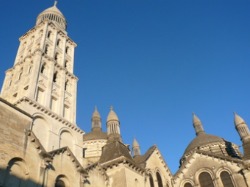 As the capital of the Périgord, there are certain things you’d expect to find in Périgueux (Dordogne). It’s got high street shops, an impressive cathedral, students and some pretty municipal gardens… not to mention Roman ruins and an unusual statue of a peg-leg general.

The centrally located Place Franceville, around which hotels, restaurants and the Monoprix department store are gathered, is a good place to start your visit. Parking underneath is both cheap and convenient. Above ground, the tourist office is easily found, in a prominent position next to Tour Mataguerre – the last of 28 towers that made up the city’s medieval fortifications.

Next stop must be Périgueux’s St-Front, a cathedral built in a similar style to St Mark’s Basilica in Venice. It was restored in the second part of C19th by Paul Abadie, the same architect who later designed the Sacré Coeur in Paris. St-Front is free to explore and a guide in English is available at the entrance in exchange for a small donation. A model inside gives visitors a view over the five domes on the cathedral roof and an idea of how this huge building fits together.

On Wednesday and Saturday mornings, there is a food market held on Place de la Clautre in front of St-Front as well as on Place du Coderc and Place de l’Hôtel de Ville. Whether or not you have come at the right time, the old streets around this area – strung with old fashioned lamps that hang from chains – are home to an array of specialist boutiques with interesting window displays ranging from antiques to designer fashions.

As you emerge from these alleys, there is a good opportunity to pass by Boulevard Michel-Montaigne with its statue of Baron Pierre Daumesnil (1777-1832) a soldier who risked his life for Napoleon on more than one occasion. He was badly injured at the Battle of Wagram and eventually lost his leg.

As for museums in Périgueux, the Musée Militaire on Rue des Farges showcases weaponry from the Middle Ages to the present day whilst the Musée d’Art et d’Archeologie du Périgord on Cours Tourny presents a varied collection of artefacts from fossils to frescoes. The Musée Atelier du Trompe l’Oeil et du Décor Peint on Rue E.Combes is devoted to painted decoration.

For some fresh air and a change of scenery, take the Rue de la Cité which runs in front of the cinema on Place Franceville and head off towards the Jardin des Arènes. The garden is also the site of a 20,000 seat amphitheatre (what’s left of it) built during the second half of the C1st AD. The ruins may be fenced off but the tunnel-like passages between the seats are still clear to see. Flowers and fountains make this garden a particularly nice place to be and the benches attract students at lunchtime.

Nearby is Château Barrière, built on the site of the city’s original fortifications and designed to accommodate knights. Most of the château has since been destroyed by fire but certain parts – a tower and staircase amongst them – remain to this day.