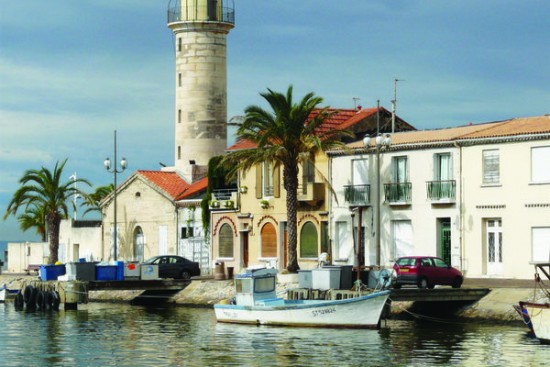 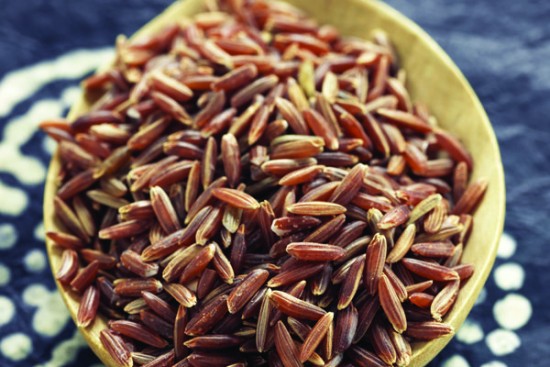 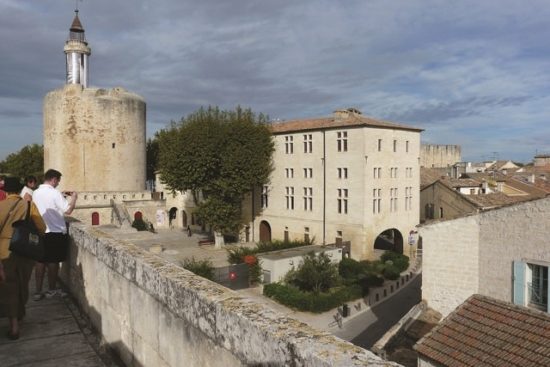 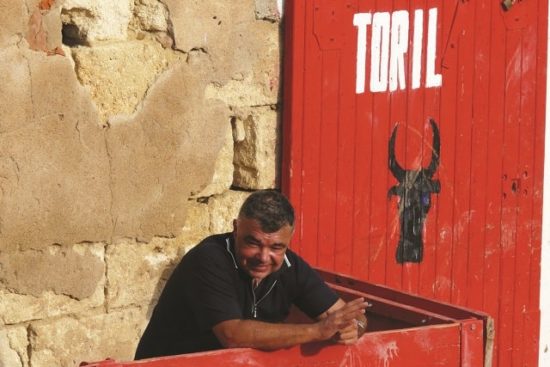 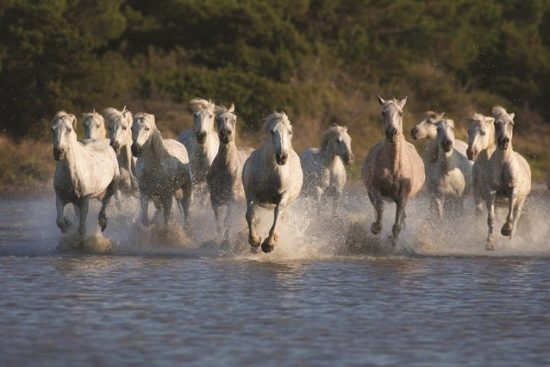 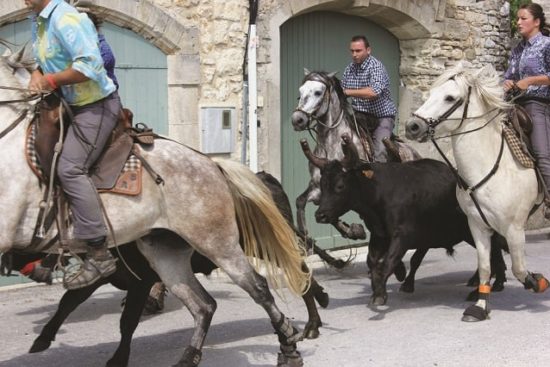 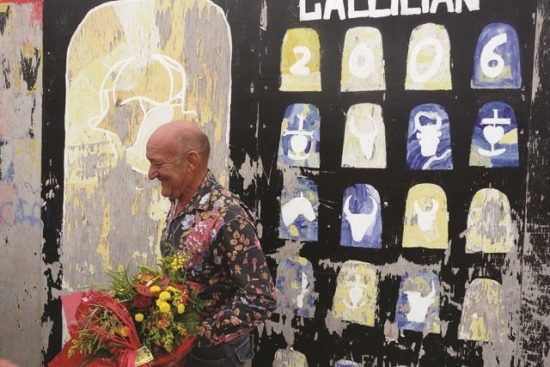 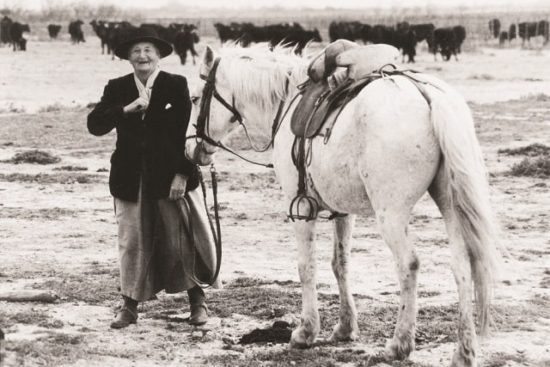 In the famous wetlands of the south of France, you will be greeted by iconic white horses and pink flamingos, raseteurs and cowboys. Norman Miller heads to Aigues-Mortes to explore this fascinating region.

The announcement repeats over the tannoy in half a dozen languages. “In a few minutes, wild bulls will be let loose in the village streets. They are very dangerous…”. A few safety tips follow, then a cheery sign-off “to have a very good time”. People roar beneath soaring medieval town walls, then a succession of bulls thunder by in a blur of hooves, adrenaline and flying sand, so close I could almost brush their dark muscled flanks. Each is shepherded through thronged streets by galloping riders astride magnificent white horses.

Once, Aigues-Mortes was the most important Mediterranean port in France, where kings came to set forth on crusades. But during October’s Fête Votive, it’s just another historic Camargue town in love with bulls and the rituals of the Course Camarguaise. This array of festivals and contests honours animals whose presence dominates Camargue culture as much as an enchanted landscape of wild pasture and atmospheric wetlands where the horses are white, the bulls are black and the flamingos are pink.

And don’t use the phrase ‘bull-fighting’. The locals rightly speak of games, contests of skill where the only ones in danger are the men who step into the arena to face a succession of bulls on foot, armed with nothing more than guile, speed and agility. These are the raseteurs, tasked with plucking three objects (attributs) from the charging bull’s head and horns – in sequence, mind, so no careless snatching. Between March and November, raseteurs and taureaux (bulls) perform a heart-stopping jig of sprints, leaps and lunges in diverse arenas, from the little church-flanked space in St Laurent d’Aigouze to the amphitheatres of Nîmes and Arles. 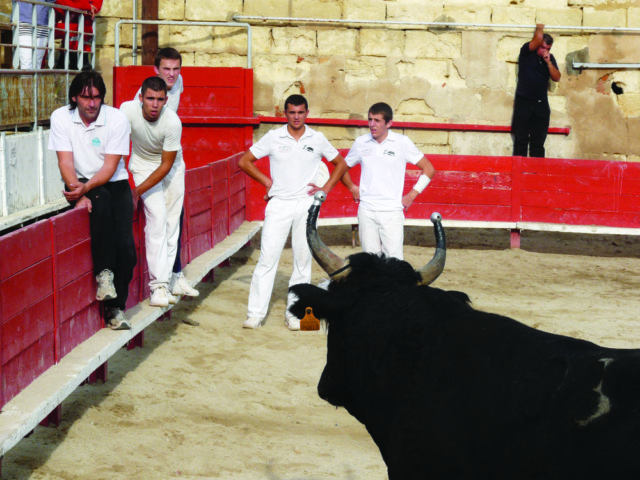 I start to understand bull at Martini, one of around 150 manades (bull farms), each overseen by volunteer mounted herders – gardians – working for love not money. “For people here, bulls mean passion – they couldn’t imagine life without them,” explains Dominique Carmoulet, his weather-beaten features breaking into a grin above his brightly-coloured traditional shirt.

Dominique explains how each bull’s personality is studied from early days, their mettle tested during herding to find those most willing to accept the challenges of the course. First selections are made at three, and by five their path will be mapped out – this one for the arena, this one for street-running, this one to sire more bulls.

For others, their destiny is the plate – humanely slaughtered for the bull meat which is one of France’s more unusual AOC products. Some are old, a few overly passive. Then there are delinquents with wild temperaments. “They have a one-way ticket,” says Dominique simply. “But we give each bull every chance for a long life.”

I see my first performance – after my first delicious bull steak – in the ramshackle arena at Gallician. Trumpets announce each bull for its 15-minute time in the little sandy oval, with a first minute alone for the animal to appraise its new territory before the raseteurs try their luck. Each pass ends with a leap for safety onto a high ledge around the stands – sometimes followed by the bull hurdling the fence in pursuit, to an appreciative roar. The best moves – from raseteur or bull (tip: if caught by a bull, fall down and play dead) – are greeted with a burst of the famous overture from Carmen! It’s scary, joyous and bonkers all at once.

Though it has distant roots in Roman games, the Course Camarguaise owes its present form to a French aristocrat with a love of the Wild West. When Marquis Folco de Baroncelli-Javon invited Buffalo Bill’s legendary show to the Camargue, he was inspired to revive local traditions that flourished in the Middle Ages but declined after the Revolution – pulling together Pale Rider steeds with bulls descended from prehistoric aurochs, alongside traditional costumes and village brass bands known as pena.

I experience them all in two wonderfully diverse days. At Aigues-Mortes’ Fête aux Prés, I join hundreds of locals gathered in fields outside the town, showing off fabulous historic outfi ts [see box] and tucking into breakfast wine and sausages while bulls and horses wheel around us in preparation for the afternoon’s Fête Votive. A grand parade of ornately decorated wagons and proud gardians follows, before a lunch where pena play for old-timers hurling themselves into madcap traditional dances, while I shuffle through the more sedate ones.

While the raseteurs compete for prizes like the Trophée des As, plus prize money that can run into six figures over a year, the most revered award is the Biòu d’Or awarded to each season’s champion bull. The talk during my trip was all about whether last year’s champion, Garlan – a canny beast feared by the raseteurs – will retain his crown. He does, to widespread acclaim and a breathless tribute the next day in the local paper. But in a few years, Garlan, like other champions (the legendary Joffre lived to a grey-coated 26), will retire to a field to which admiring locals will make pilgrimage – because here, bulls are stars.

I mix beastly engagements with less bullish pleasures. At the Scamandre eco reserve, sitting by Europe’s largest concentration of reedland, I tag behind a posse of Hells Angels – hey, bikers love nature too – strolling wooden walkways deep into a watery paradise, where eager twitchers scan for 130 bird species. 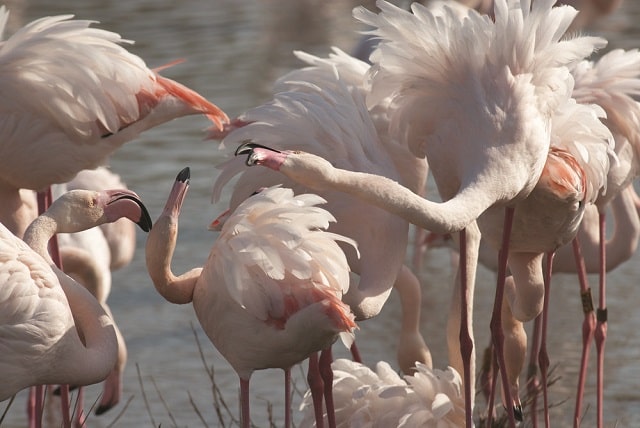 Though a nature-lovers’ paradise, this flooded vista owes much to human design. Sophisticated water management is used not just to stimulate biodiversity but also for controlled flooding of inland fields for growing the famous Camargue rice. Without such intervention, this Mediterranean hinterland would revert to the state that explains the ancient naming of Aigues-Mortes (from the Latin Ayga Mortas – ‘Dead Waters’) – a desolate landscape good only for extracting salt.

Not that making salt is to be sniffed at. So precious was it once that the Romans used salt to pay soldiers – hence the word salarium, from which salary comes. And salt is still produced here, huge gleaming white hills of the stuff visible from Aigues-Mortes in the nearby Salins du Midi.

You don’t need extra salt to make Camargue cuisine sing, mind you. Bull is delicious but my strongest meaty memory is grilled rabbit kidneys, a paean to nose-to-tail eating. From the rivers come freshwater treats like zander and eel, complemented by oysters from the Thau lagoon and superb seafood (especially tuna) from picture-postcard ports like Grau du Roi, where Ernest Hemingway honeymooned with his second wife. Dunebacked beaches stretching from neighbouring Port- Camargue provide a side-order of seaside lazing.

Vineyards mingle with bull fields, along with olive groves and fruit farms. At Château Beaubois, I meet Fanny Boyer, already a key player in the Costières de Nîmes AOC despite still being in her twenties. She explains how a terroir of coast and marsh influences her wines, reveals her efforts to educate young palates by taking nosing bottles into local primary schools, and talks about her pioneering organisation to bring together women winemakers around France. Boyer clearly combines energy, style and passion – much like her homeland in fact.

Camping in the Camargue