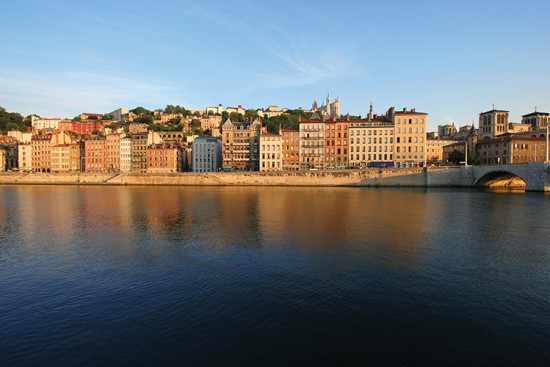 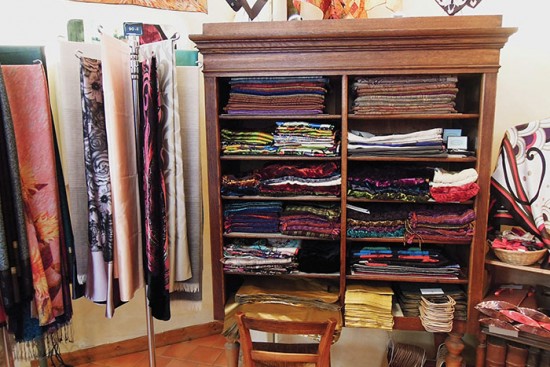 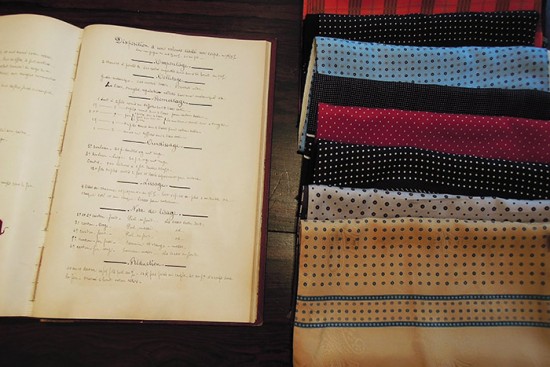 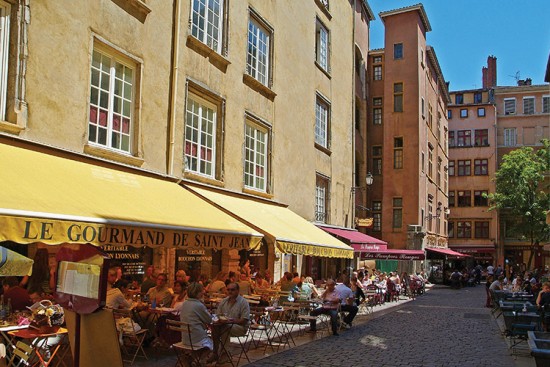 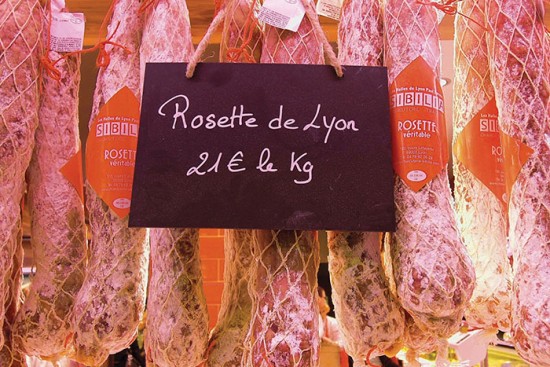 Gazing northwards from the 17th-century Pont Bonaparte, which connects Lyon’s old town via the Saône River to the grandiose Place Bellecour, each layer of the city’s history unfolds into view.  I take it in: the pale-green waterway and its lining of Renaissance façades in earthy shades of terracotta; to the west, the geometrical bell towers of the basilica atop the colline de Fourvière, and opposite the clustered red rooftops on the colline Croix-Rousse, which was once the industrial hub of Lyon’s prolific silk-weaving industry.

“We have a saying about the two hills of Lyon,” says Aïmée, my guide, as we stroll towards the Old Town. “Croix-Rousse is known as the hill that works, and Fourvière the hill that prays.”

I’m not on a religious pilgrimage, rather a quest to follow another trail steeped in legend, tradition and opulence: Lyon’s silk road.

This city’s history predates its industrial heyday by many centuries, and ‘the hill that prays’ also preserves a smattering of precious ruins: the ancient remains of Lugdunum – meaning the ‘city of light’ (Lyon claimed the nickname long before Paris) – founded by the Romans city in 43BC. By the 15th century, Lyon was one of the most densely populated cities in Europe and its prime geographical location at the confluence of two major rivers, the Saône and the Rhône, made it a merchant trade hub. This was developed under the monarchic rule of Italophile François I, a fine arts patron and close acquaintance of Leonardo da Vinci, who bestowed the Mona Lisa upon him during a stay at the Château de Chambord.

Lyon’s creative industries continued to flourish during the Renaissance, thanks to the influence of Italian artists and architects. Some stayed long enough to leave their legacy in bricks and mortar, as is the case with the 18th-century Italianate temple the Loge du Change.

Louis XIV set up Lyon’s first silk manufactory in 1466. Monarchs and priests alike were seduced by the exotic textile, which was already embellishing wealthy merchants’ palaces across Italy, and in 1540 the city was granted monopoly of silk manufacturing by François I. From this point on, all fine fabrics travelling the ‘Silk Road’ from Asia to Europe would end up in Lyon’s warehouses. By 1620 there were over 10,000 looms in the city, which cemented Lyon’s status as a global centre for silk weaving.

The 18th century saw dramatic peaks and troughs in French silk manufacturing. The weakening monarchy commissioned an abundance of ornate furnishings in its last snatched years of power, before the Revolution destroyed 90% of Lyon’s textile industry. The Revolution saw thousands of the city’s workers, known as ‘canuts’, executed between 1789 and 1797. Yet a glorious comeback was made in 1801, when pioneering engineer Joseph Marie Jacquard invented a mechanical loom which would rapidly industrialise silk weaving throughout the following century, with the industry employing some 100,000 canuts at its peak. Larger workshops were built to accommodate the new workers in the city’s Croix-Rousse district and its warrens of cobbled streets and tall-windowed maisons still house artisanal silk weavers today, despite the industry’s near-complete decline thanks  to workers’ riots and, later, the global reshuffle brought about by World War 2.

Nicknamed the ‘Montmartre of Lyon’, this city village is hipster central. Parisians in search of cheaper rent and a slower pace set up here, and cafés with fixed-gear bikes suspended from their walls rustle up fruit smoothie cocktails and flat whites silky enough to rival the textiles that preceded them.

Back in Vieux Lyon, I step into an Aladdin’s cave –  the Soierie Saint-Georges, one of only three silk- weaving boutiques still using the Jacquard loom. Past piles of magenta shawls and silver-threaded throws there’s a low-ceilinged studio, where master weaver Ludovic de la Calle is ferociously working an antique wooden loom with nimble dexterity. A gold and red fabric of luxurious delicacy forms beneath his fingers as he enthuses about the craft that’s been his métier since 1975. Ludovic describes the satisfaction gained from sourcing his materials solely from local manufacturers and upholding the traditions of this fading artisanal industry.

From old to new

Continuing to pursue innovation, Lyon is a city that forges new futures while carefully maintaining the heritage that keeps it firmly grounded. Its latest cultural endeavour, the Musée des Confluences, is a natural science and anthropology museum that makes thoughtful links between past and present, exploring human identity and detailing Lyon’s story, from pre-history to its contemporary challenges. The building’s deconstructivist design in stainless steel and glass is the most modern in a series of urban developments in the Confluence district –  the narrow peninsula at the conflux of the Rhône and Saône – which plans to increase the area’s population by 11,000 and create 25,000 new jobs.

Nothing better illustrates Lyon’s exchange between tradition and innovation than the business of food, and it’s called the gastronomic capital of France for good reason. Here, Michelin-starred visionaries rub shoulders with the maître d’s of traditional bouchons – old-time workers’ brasseries that churn out rustic, no-frills regional lunches for a steal.

Local specialities can be discovered in all their porky glory at the Halles Paul Bocuse gourmet food market, where pigs’ trotters, ears, tails and cheeks  are displayed amid hanging rows of andouillette and rosette sausages. Lyon’s gastronomy hinges on its history of resourceful peasant cooking and its prime geographical location, surrounded by fertile farmland and vineyards, means that local produce abounds at this covered market bustling with scrutinising chefs and bouchon matriarchs. After a slap-up market lunch of fried saucisson and  a warm potato salad, followed by an excellent Saint-Marcellin cheese – as favoured by gastronomy legend Paul Bocuse himself – I’m sufficiently sustained for my final stop-off. The Opéra Nouvel is the epitome of Lyon’s unique fusion  of old and new, and I’m to take a backstage tour.

Opera, another important artistic import from Italy, was introduced to France in the late 17th century, at the peak of cultural exchange between the two realms. Prior to the construction of Lyon’s original, Jacques-Germain Soufflot-designed opera house in 1756, performances took place on the streets, a practice that’s echoed today by the grassroots hip-hop groups that congregate on the square before the building to show off their moves.

The current opera house is part 19th-century neoclassical and part modernised reinvention. The original structure was first rebuilt in 1831, and renowned architect Jean Nouvel was commissioned  to undertake its €17 million revamp in 1986. Controversially, Nouvel gutted the whole building, added six floors of storage and rehearsal space, and decorated the entire interior in black and red.

After exploring a labyrinth of underground rehearsal studios, I emerge at ground level. Dusk is plunging the black-painted reception hall into an atmospheric haze of dim lighting and low ceilings, as opera-goers jostle in line for the opening night of Christoph Wilibald Glück’s Orpheus and Eurydice.

Zipping up narrow escalators and finding my way  to the auditorium is an altogether disorienting experience, thanks to a notable lack of lighting. Nouvel chose his monochrome colour scheme to purposefully destabilise spectators and offer no distractions from the performance itself, thus ensuring their full attention. It was a clever trick and it works – by the time I enter the short passageway into the theatre, which features drastic floor-to-ceiling red velvet to recall the traditional stage curtain, I’m on full alert to what awaits.

Even in the near-pitch black, the vast auditorium  is impressive. The darkened rafters soar high above 12,000 barely visible seats, lit solely by tiny bulbs on each that twinkle overhead like stars. Suddenly the hushed room swells with celestial orchestral sounds and the stage lights up in full technicolour. Nouvel’s vision is realised: in this city of incredible heritage, artistic innovation still has the power to illuminate the glorious traditions of a bygone age.

Getting there
Fly to Lyon-Saint-Exupéry Airport from many European and worldwide destinations. Eurostar has launched a service to Lyon from London, which takes around four hours and 40 minutes.

Visiting the opera
For full details of the 2015-2016 programme at Lyon’s esteemed Opéra Nouvel, please visit the opera’s official website

Contacts
For further information, check out the comprehensive online guide to visiting Lyon