‘My husband Dan and I bought ‘La Trottiere’ in the autumn of 2002 in a moment of complete madness! Not only did we buy it on our first buying trip to France, we also saw it on our very first day. Plus I didn’t really know France. We were hardly true Francophiles! I had only ever been to the country once before but as I disliked flying we wanted to buy somewhere that could be reached by car.

We fell in love with the house because of the views. Built into a hillside, over three stories, from it you can see right across the Mayenne valley. At night you can lights from three towns twinkle in the distance. It cost just £15,000 – back then you could still get ruins for silly money – but it really was a ruin. It’s 450 years old and by the time we bought it was little more than four walls and a roof that needed a lot of work. At the time the magnitude of what we were taking on didn’t sink in – that didn’t happen until later.


We thought we would renovate it during holidays but after a short time we realised that we would be renovating for the next 30 years worth of holidays! So we got a French artisan in to do the slate roof. He was recommended by our estate agent and the whole process was completely painless. He started in spring and by the time we came over in the summer, it was all done.

At the time we were living in Norfolk, England, but then I had a serious health scare and while I was convalescing we decided to change our lives and move to France. We thought that if we didn’t take the plunge now we might regret it forever. So, once I was better, in April 2004, we both left our jobs, sold our house in the UK and, with our son, Max, who was almost four years old, moved to France.

We lived in a very small old caravan – with no electricity or sewage! – on site. Looking back I can see the stupidity! It was tough – cramped, dirty and at times wet and cold. The lowest point was probably when the porta potty exploded all over me when I was trying to clean it. I just sobbed! Winter would have been unbearable so sensibly we rented a gite.

But we still managed to get on with doing the house and after nine months we were able to move in. In the UK Dan painted cars but he is very practical and so he did most of the work himself and I helped when I was not caring for Max.


The house is a little different to the norm because of how it has been built, on one side the ground floor is partly underground and then the other side is at ground level. On the ground floor are two bedrooms and one of the two bathrooms, with the kitchen and the living room on the first floor. On the top floor are two more bedrooms and another bathroom. As the house was originally two small cottages, we were limited by the layout as the central dividing wall is very thick stone. So the living room and kitchen instantly seemed to belong on the middle floor.

We dry-lined the walls as well as put in new floors, including joists, in the kitchen and loft bedrooms where the wood was completely rotten. We used pine floorboards from Bricomarche and stained and waxed them to match the kitchen units. Next we put in two spiral staircases, bought from Lapeyre, so all the floors were linked, as well as fitting new windows and doors that were also from Lapeyre.


We also plumbed the entire house, including the two bathrooms. After being told that it would take 18 months before we could get an electrician, Danny learned how to do it himself and got the ‘conseil certificate‘ so that we could be eventually connected to mains supply. Other than the roof, the only jobs done by others were installing the septic tank and some hard landscaping outside. We created a terrace by clearing and levelling an area to the side of the house, and it’s a perfect place to sit and enjoy the fantastic views.

When it came to the decoration, we wanted to keep the cottage simple and uncluttered so it felt spacious but comfortable. We painted the walls a neutral shade which helps make the rooms feel light and bright. There are some incredible beams in the house, especially in the living room, which give the house real character. These were brushed down and given a couple of coats of varnish. We also kept some of stone walls exposed to retain character – it’s an old building and we didn’t want it to look like a modern box inside.

But, while it’s old we didn’t want it to be all old fashioned inside so the furnishings are a mix of traditional and modern. For example the kitchen, from IKEA, is made of oak which is traditional wood but the style is contemporary. We teamed this with modern appliances and dark grey and silver worktops. I wanted a large island unit so that I could chat while cooking, so we used two extra wide draw units and a worktop with overhang that created a casual seating area with bar stools. 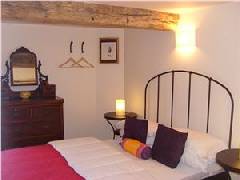 The second bedroom (left) has an antique iron bed which I’ve teamed with a cheat of drawers that’s a family heirloom. Max’s room was created in the loft space by using the existing ‘A frame’ as the wall structure, a jungle theme evolving as the beams looked like huge tree trunks growing through his bedroom. In the master bedroom, also in the loft space, we managed to keep much of the original wood work. I used hidden uplighters to maximize the effects of the woodwork against the pale walls. The room is really bright and airy – perfect for a relaxing bedroom.

One of the features of the living room is the colour red. I love it – my poor husband has had to endure in every house we live in – but it’s a great colour to make a room feel warm and vibrant. You have to be careful though, as too much of it would feel a bit gruesome and gothic, so the sofa, also from IKEA, is black suede effect, and that colour calms the room down, and works well with the red rug also from Ikea. I made cushions from red dupion silk, and roman blinds from grey dupion which I got from ebay. I wanted a modern stove in the living room and I found this one, called ‘Saey’ from ‘Eurostove’ on the internet. It comes from Belgium and was shipped direct to France. It’s very efficient and heats the house very well as well as being a focus piece to the room that looks fantastic alight.

We sourced some things in France, such as most of the building materials, but some of the furnishings as well as the paint came from England, which we brought back ourselves in our trusty truck. The bathtub was from a local store around the corner from where we lived. The leather bed in the main bedroom is from Homebase. 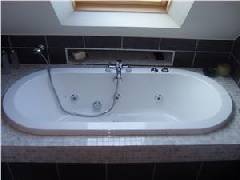 Also from Homebase are the black tiles in the main bathroom (left). They were pretty inexpensive but we mixed those with a few beautiful polished marble mosaic tiles from Reed Harris that really glisten and give the bathrooms a luxurious feel.

We reckon that we spent about £40,000 on renovating the house, although that figure includes our living expenses for the time that it took. After we finished the house we had to decide what we were going to do, Danny started work for a building firm, but we soon realised that we couldn’t really afford to live in France. Danny wasn’t really qualified so he couldn’t work for himself and the money was terrible which meant we had just enough to live on. Plus Max wasn’t really happy in school and we missed our friends and family.

So in February 2006 we returned to the UK, and fitted seamlessly back into our life. Danny went back into the family business, and I went back to my old job in marketing. We rented a house which we have subsequently bought and are currently extending (fortunately without the portta potty).

We have thought about selling the house in France – the estate agent who sold it to us valued it at 200,000 euros, and said it was the best they had seen, but at the moment we can’t make up our minds. It has been such a large part of our lives that it would be hard to sell it. So in the meantime we have rented it out, and in the first year we had so many bookings – 17 weeks – that there was no free time during the summer for us to use it! I suspect it may be in the family for sometime to come.

* mix antiques with modern furniture and fittings to create a look and feels comfortable but contemporary at the same time.

* a touch of rich colour, such has red, can make a room feel inviting but don’t go overboard. Go for either one stand out piece of furniture like a sofa, or accessories such as a rug, cushions and vases.

Zoe’s renovating advice
* buying item from the UK can save money, especially if you combine shopping trips with holidays to visit friends and family. I would recommend shopping around online

* having neutral floor and wall coverings and adding colour through accessories is a good idea, and the look can be quickly changed inexpensively if you get bored of the colour scheme

* Could your home help and inspire others living in France?
If so, we’ve love to see it! All you have to do is email a few pictures to us with a few lines about what you’ve done. Easy!