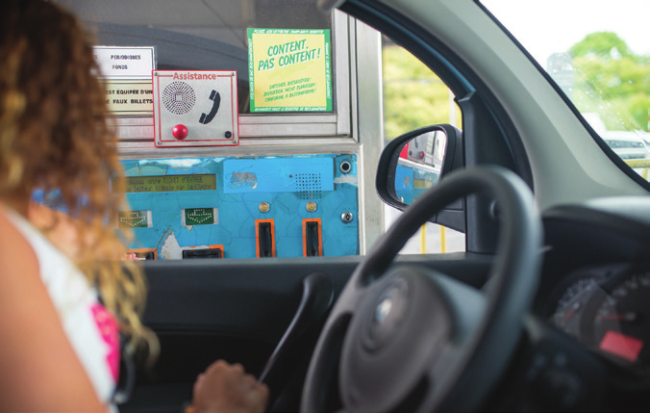 Outside of the month of August, driving on France’s Autoroutes is generally a joy. You’ll experience little of the tedious congestion and seemingly endless roadworks that we have to endure year-round in the UK.

However, what you will experience is more than a little aggressive driving. In the fast lane, especially, there’s little liberté, egalité and fraternité in evidence. Don’t be surprised if you suddenly see a powerful car in your rear-view mirror, just a few inches off your back bumper, intimidating you with flashing headlights. Even if you’re actually overtaking someone else, you’ll be expected to vacate the lane immediately.

That said, there’s one way to ensure that even the most aggressive French driver allows you your allotted time in the fast lane, and it involves indicator etiquette: keep your left flasher going for your whole time in the fast lane. It’s a way of saying, ‘keep calm. As soon as I’ve passed this car, I’ll move back into the middle lane’.

There are a few legal requirements when it comes to Autoroute driving. The speed limit is 130kph (80mph) in good weather or 110kph (68mph) when it’s wet. As on all French roads, you must carry a hi-vis jacket, warning triangle, spare bulbs and a breathalyser kit in your car.

Now for the toll booths, or péages. If you’re paying in cash, opt for a lane with an image of coins or an attendant as it’s bank cards only in the lanes marked ‘CB’. Non-French drivers can invest in a ‘Liber-t’ tag, which allows them to drive straight through the Télépéage lane (marked with an orange T), and debits their bank account at a later date. However, that costs up to €16 per year to subscribe. Is it really worth it, to shave a few seconds off your péage experience?

Well, it might be if you’re driving alone and find yourself forced to shuffle from your right-hand seat to the passenger side, in order to pay at the booth. For solo drivers it’s often quicker (and more graceful) to exit the car and walk round to the machine.

Finally, a note on France’s wonderful Autoroute service stations, known as aires, which are so much more civilised than our filthy British ones. At the larger aires there are wooded picnic areas, children’s playgrounds and vaguely decent restaurants. During long journeys across France you’ll bless them. On most Autoroutes you’ll come across an aire every 15kms. The Association des Sociétés Françaises d’Autoroutes (ASFA) advises drivers to take a break every two hours.

“In the summer, you’ll enjoy the many special entertainment and educational features at motorway service areas,” the ASFA say, with more than a hint of intrigue. “Stop, take a snack, and take a nap.”

From a moped to a Harley Davidson, from a Twingo to a Rolls Royce, we can insure whatever type of vehicle that you may own wherever you live in France and your public liability is always included in the contract Find out more