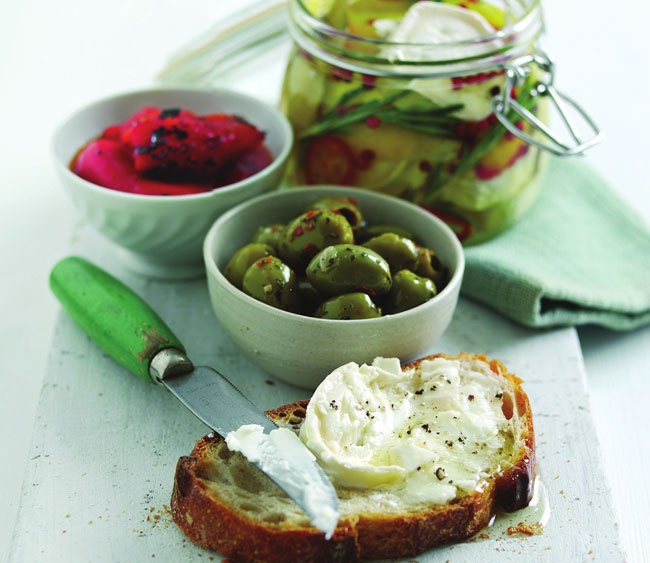 French goat’s cheese – called chèvre – is a winning ingredient all year round. Here Sophie Wright presents some of her favourite recipes 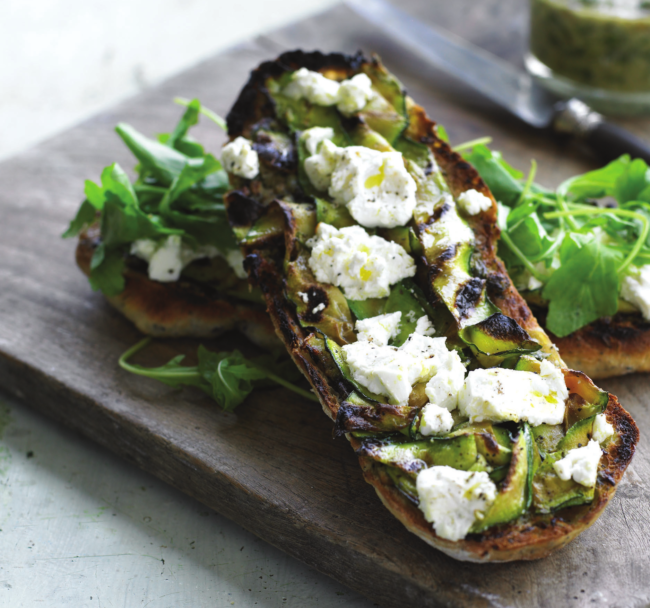 Start your sandwich by first making the pesto. This can be done up to a week in advance.

Take the parsley and basil leaves and place in a food processor along with the chopped garlic, walnuts, parmesan, olive oil and lemon zest. Blitz to a chunky paste, before adding the lemon juice, salt and pepper. Make sure you taste it for seasoning. You may need a squeeze more lemon.

Heat up a griddle pan to the highest setting.

Slice the courgette very thinly. I prefer to do this using a swivel-head peeler so you get very thin ribbons but a knife will do the job. Coat them in olive  oil, season with salt and pepper and lay them on the hot griddle pan. Leave them to cook until bar lines start to appear, turn them over, add a squeeze of lemon juice and leave to cook on the other side for about the same length of time.

While the courgettes are cooking, cut the ciabatta in half, drizzle with olive oil and sprinkle with a little sea salt. Lay the bread cut side down onto the griddle pan and allow to char for a few minutes.

Spread both sides of the warmed bread with the walnut pesto.  Once the courgettes are cooked, lay them onto the pesto-covered ciabatta and crumble over plenty of goat’s cheese, drizzle with yet more olive oil and place under a hot grill until the cheese starts to melt and bubble.

Once cooked, lay on plenty of rocket, place the two halves of the sandwich together and eat straight away. 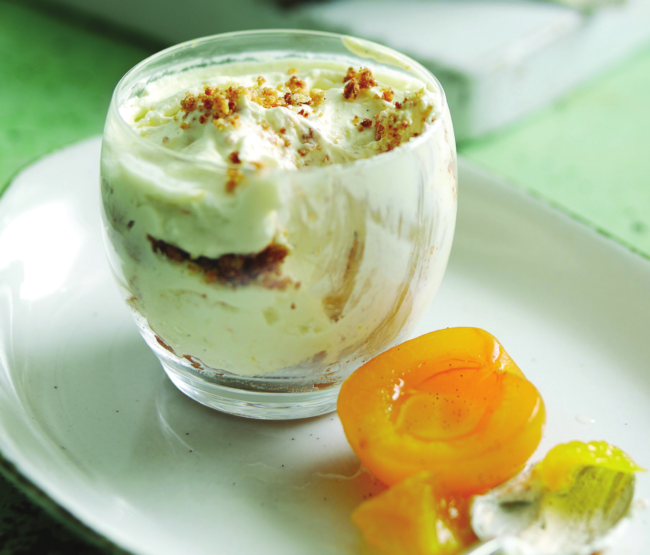 Blitz the Amoretti biscuits to a fine  crumb and put 1 tsp into the bottom of six small serving glasses.

Drizzle with a tsp of Grand Marnier.

Pour the double cream into a mixing bowl and whip with the icing sugar until semi firm peaks form. Add the vanilla bean paste and orange zest. Once whipped, add in the French goat’s cheese and beat until smooth and slightly aerated. This can be done easily with an electric whisk. Place 2tbsp of the cream and French goat’s cheese mix on top of the Amoretti biscuit crumbs.

Sprinkle with more Amoretti, top with another 2 tbsp of the cheese mix and finish with a final layer of the biscuit crumb. Place into the fridge to set while you poach the apricots.

To poach the apricots, pour the sugar and the water into a small saucepan along with the split vanilla pod and cinnamon stick. Bring to the boil and simmer for 10 minutes before adding the halved apricots and cook for 5-10 minutes until tender, but not falling apart. Leave the apricots to cool in the syrup before removing them. Remove the skins if they look like they will come off easily. Strain the syrup and keep until you’re ready to serve.

When ready to serve, heat the apricots in the strained syrup and place next to the set cheese dessert and drizzle the apricots with a little of the syrup.