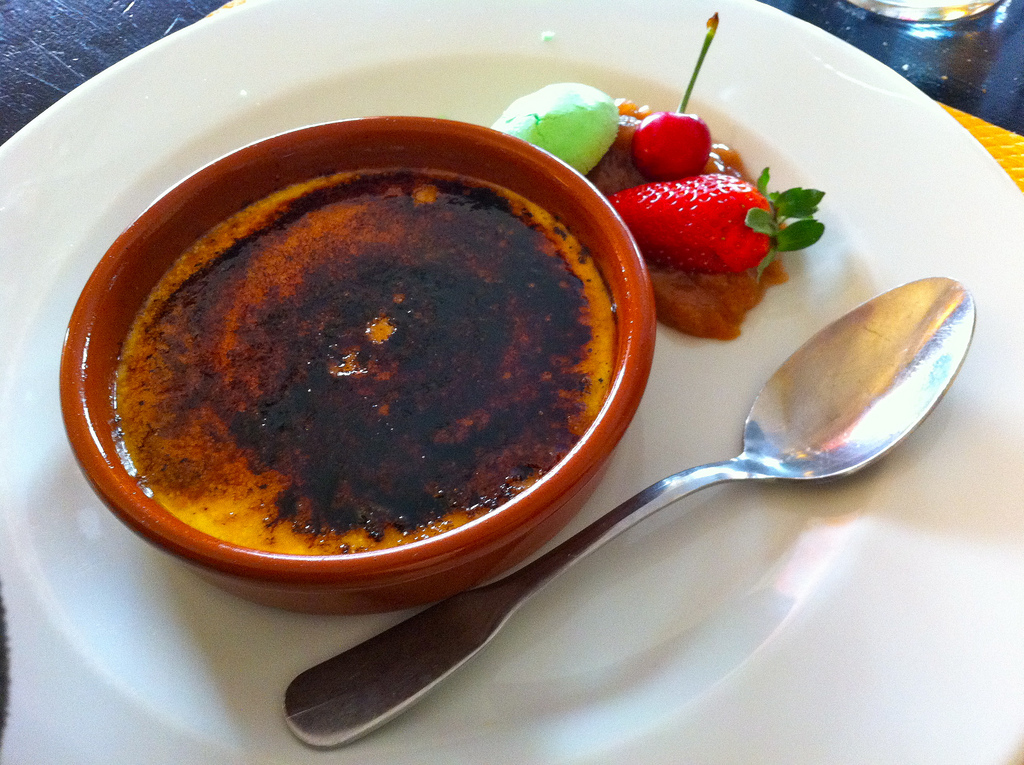 A traditional dessert from French Catalonia in Languedoc-Roussillon

If you’re looking for a traditional Languedoc-Roussillon dessert to delight your dinner guests, then why not turn your hand to the surprisingly simple preparation of a Crème Catalane – a favourite from the French Catalonia area in the south of the region bordering Spain. A more delicate dish than its cousin the crème brulée, the traditional Crème Catalane is lightly cinnamon flavoured with a divine crisp caramelised sugar crust, but I have also included here variant on the theme which you might also like to try!

Note:  Aside from the usual range of kitchen utensils you will also need enough ramekins dessert dishes to accommodate your crème. Enjoy!

Serves 4-6 depending on size of ramequins

6 eggs
1 litre of milk
Zest of half a lemon
1 stick of cinnamon
250g caster sugar
50g corn flour
Unrefined cane sugar (known as cassonade in France, you can use light brown sugar at a push)

First separate the egg yolks form the whites into different bowls. Put the 250g caster sugar in a large bowl and add the egg yolks, and then whisk briskly until the mixture turns white.

Next reserve 200ml of cold milk in a bowl and slowly add the corn flour whilst gently whisking to ensure there are no lumps (nb – use a clean whisk). Leave this to one side.

Then pour the rest of the milk into a saucepan and gently heat, along with the stick of cinnamon and the lemon zest.

When the warm milk reaches boiling point, lower the temperature to a simmer and add the caster sugar/ egg yolk mixture, stirring well.

Allow the mixture to warm through again and then add the cold milk/ corn flour mix – keep stirring and remove the cinnamon stick. Continue to simmer the mixture until it starts to thicken to a creamy thick custard consistency, being careful not to let it burn or get lumpy.

When you’ve reached the desired consistency, pour the mix into the ramekins and allow to chill in the refrigerator for at least 2 hours.

Finally and ideally just before you serve them, evenly sprinkle a generous amount of the unrefined cane sugar onto each serving, and either place the ramekins under a hot grill or use a cook’s blowtorch to gently caramelise the sugar.

Top tip! To avoid your crème reheating too much, once you’ve caramelised the sugar, place the ramekins quickly into a shallow dish full of water and ice to let them cool for a minute before serving.

Variations on a theme

Fennel and vanilla – In place of the cinnamon stick, use 1 teaspoon of ground fennel seeds and a vanilla pod; once you’ve heated the milk to the boil, add the fennel and vanilla and take off the heat for 30 minutes to allow the flavours to infuse, then strain the milk, reheat it and pick up the recipe where you left off.

Orange or vose vater and vanilla – In place of the cinnamon stick, simply add a few drops of orange or rose water, plus a few drops of liquid vanilla flavouring to the heated milk.

Spiced crème – Instead of the cinnamon stick, you can add a teaspoon of ground cinnamon, a pinch of saffron or half a spoon of turmeric, and a few drops of lemon or lime flavouring – basically go to town and enjoy making creative versions using anything you think might work!