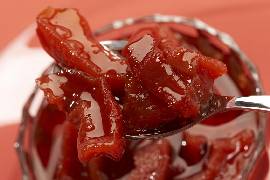 Chris Lacey is a British chef living in France who loves French-inspired cooking. In a continuing series of recipes using a seasonal star ingredient, for October he rustles up some dishes with quince.

“A few centuries ago, the quince was as popular as apples and grapes in France but today it is eaten more sparingly – perhaps because it cannot be eaten raw. To us expats, it is something we don’t come across except as a character in Shakespeare or in the poetry of Edward Lear. But the shops are filling with this fruit, so do give it a go.

“First up is a recipe for quince jelly (during the final stages of cooking it turns a deep red colour) followed by a second recipe for a traditional French ‘marmalade’ – not to be confused or compared with marmalade as we know it in England.”

Peel and slice the ripe quinces, immediately immersing the fruit in cold water during preparation.

Once done, place the fruit in an aluminium or copper pan in the proportions of water to fruit as listed above.

Bring them to the boil without stirring, and continue until cooked. As soon as the fruit is cooked strain the juices through muslin.

Place the strained liquid back in the pan and add the sugar following the proportions as listed above. Cook rapidly until the jelly starts to firm – about 10 minutes

To check whether it is ready, first skim any impurities which rise to the surface, then drop some of the liquid onto a cold plate – if it slides slowly across the plate the jelly is ready (235°F on the sugar thermometer)

Remove the jelly from heat and allow to cool. Fill warm sterilised jars with jelly, leave for 24 hours then seal. Store in a dry cool place.

Peel and slice quinces, again immediately immersing the fruit in cold water during preparation. Place the fruit a copper or aluminium pan. Moisten with a small amount of water and cook over a gentle heat.

Once cooked run the fruit through a sieve and return the purée to the pan along with the liquid produced when cooking.

Add sugar in the proportions above and mix well. Then boil the marmalade, stirring all the time, until done.

To determine this, periodically drop a blob onto a plate, if it remains in a blob without spreading out the marmalade is cooked.

Allow to cool for a few minutes, place in jars, sealing them the next day.