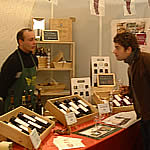 We have had two national food festivals in our area, in the last couple of weeks!

The first was the internationally renowned ‘Salon International du Livre Gourmand’, in Périgueux, which is based around books on food and drink. Then, from November 26th – 28th , was the turn of the 10th anniversary ‘Gastronomades’ in Angoulême.

The books at the Périgueux festival are naturally all in French, including ‘Simply British’ (Penny Holmes, Marabout) !, but it was incredible to see the wealth of books that are being published on the subject. So many beautiful books, so little space for a library in our kitchen! The range of titles was phenomenal, from general recipe books based on themes such as ‘cooking like grandma’, to very specific subjects about the cuisine of a particular village, or the merits of one single ingredient. Then there were the food stands… 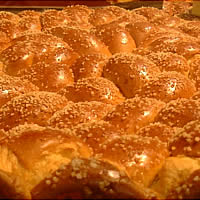 The Salon du Livre Gourmand has been going since 1990, and takes place every two years. Each Salon has a special ‘invited country of honour’, which basically dictates the Salon’s theme. This year was the turn of Belgium, who enlightened visitors about their produce, with not only books on the subject, but several stalls selling Belgian beer, ham and lots of chocolates.

One of the most interesting goings-on at this festival was the truffle stand, put on by the ‘Musée de la Truffe’ in Sorges. They had HUGE truffles in baskets, and, although these fungi were for sale and very expensive, everyone was welcome to sniff the truffles and learn the unmistakable aroma for themselves.

‘Gastronomades’ is a huge food fair and we had a lovely time there, ambling between the marquees, which were dotted around the town centre, feasting our eyes on the amazing displays and demonstrations. And feasting our tummies on the tasters of ham, bread, cakes, cheese, wine, pineau, water, cocktails, chocolates, barbecued pork and more ham! 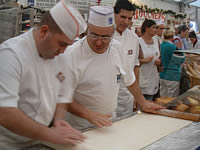 The aim of the festival is to increase people’s awareness of what is going on in the food world, and the weekend’s activities include professional cooking competitions, theatre productions, awards ceremonies (including ‘Most Gastronomic Initiative’ and ‘Best Amateur Terrine’.), and interesting workshops for children. There were also numerous food stalls from all over France, where businesses could sell and tell the public about their produce. You can learn so much there, from watching the masters at work! It was really interesting, for example, watching bakers make familiar pastries, like ‘pain au chocolat’ from scratch. 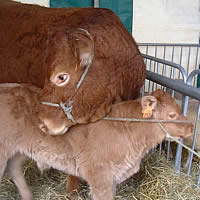 In true french style, there were also animal stands, containing piglets, a veal calf and it’s mummy, interesting breeds of cow, goats, rabbits and their babies, various poultry, sheep and a novelty shaggy donkey. These were situated opposite the barbecue stands! Far from being in bad taste, parents were able to show their children – and themselves – where their food comes from. Seeing a cow up close is quite awesome, due to their size and their beautiful, gentle faces, and is completely different from seeing a picture in a book or on the TV. Gastronomades was an exciting day out for all the family.