Cheese: Cabécou
Bought from: Available in fromageries all over France.
Price: Usually about €1 – €1.50 per cheese, but if you buy several at once, you usually get much better value.
Type of Cheese: Little, uncooked, unpressed goat’s cheeses, made from unpasteurised milk.
Ingredients: Unpasteurised goat’s milk, salt, rennet
Age: Usually bought and eaten at just over one week up to a couple of weeks old, when the flesh starts to go gooey, and the skin is soft, white and loose. The very strong and hard dried versions can be months old, and there’s every strength and texture in between, depending on age.
Region produced in: All over France, but their homeland is the Périgord. 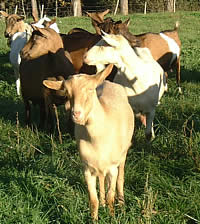 This fantastically versatile cheese is a generic type of cheese, with hundreds of artisan and factory versions available. Probably the most well-known are the cabécous of Rocamadour, a village clinging to cliffs in the southern Périgord.

As with the lamb and truffles from this region, their origin is more important than simply geography. The geology of this huge area encompasses a limestone ridge on which the goats and sheep graze, keeping down the scrubby gras and hardy wild herbs, munching on flowers, leaves and berries. Most crops are unsuccessful on the thin, stony soil, but for goats and sheep it is ideal, which is why the breeding and milking of these creatures are the traditional source of income.

At the end of February, every year, milking begins again, after the annual crop of kids have been born and – at least with artisan cheeses – been left to suckle for a few weeks. So, early March sees the appearance of the first new artisan cabécous at the market, made with the earliest, richest milk. 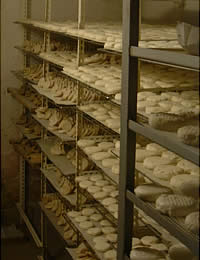 Then, in late March and early April, the new shoots of tender grass, herbs and flowers appear, giving the cheeses an aromatic, sweet quality. By July and August, the hardy wild herbs, such as thyme and mint add their aroma and savoury flavours.

What better way to enjoy the lazy heat of August al fresco dining in France, than with one of these fragrant and fresh parcels of creaminess? They are wonderful served on their own or with walnut or olive oil and salt, at room temperature. A few leaves maybe, or spread on walnut bread or granery toast. cabécous are also superb grilled and served on salad, or coated in bread crumbs and carefully fried. If you cook them, beware of breaking their skins before you get them to the plate, and letting the goodness ooze out .