It was the first mild day of spring after the long cold spell, when we drove round the lane, up to the Trappist community of nuns, Notre Dame de Bonne Espérance (Our Lady of Good Hope). The sun was shining, the sky bright blue, and the impressive buildings of the Abbey shone white.


We had come to find out about the cheese which is made here. Both ‘au naturel’ and walnut-flavoured, the famous ‘Trappe Échourgnac’ cheese is sold in shops, supermarkets and on stalls, throughout the local area and beyond. On entering the clean, warm, modern shop, we were surprised by the range of their stock, and the size of the outlet. An ancient Sister struggled with the cash register and took an age to serve the customers in front of me. It must have been her who I had spoken to on the phone last week, and I wondered if she’d know what I was talking about now. But when I said I was a journalist, she picked up the phone and efficiently recounted all that I had told her a few days before, to her colleague.
Sister Marie-Thérèse would be with me in 5 minutes, which gave us time to look around the shop. We were in our element; an incredible treasure trove of interesting and exquisite trappist food and drink from all over France and abroad. There is an extensive book section, and C.Ds on sale, as well as luxury gift items and some beautiful cards, which are pretty unusual in France. But the edible and drinkable products were a fantastic discovery! The nuns here specialise in fruit jelly sweets and jams, as well as the cheese, and they also sell a plethora unusual produce from other ‘Trappes’. From bitter orange liqueur to foie gras – We chose creamy, bright yellow sunflower honey, a Chimay beer jam and 1/2 one of the large walnut-scented cheese.

Luckily, Sister Marie-Thérèse arrived before we could go berserk buying their entire stock, and she was pleased to chat to me about the nun’s work. It all began in 1868, when some monks from the Abbey of ‘Port du Salut en Mayenne’ established themselves in Échourgnac, to help the local inhabitants. They began collecting milk from local dairies, and making cheese – the infamous Port Salut, which is still made in the abbey from which they came. Their cheese evolved over time, but the monks left and were replaced by nuns in 1923. By 1996, the cheese-making equipment needed replacing to meet official standards, and demand for the cheese was rapidly out-stripping supply.

The Order of Notre Dame de Bonne Espérance could not afford the necessary equipment, and took the decision to employ the local dairy to make their curds for them, according to their exact recipe. Now the raw curds are taken to the ‘fromagerie’ in the Abbey’s original vaulted cellar, where secret processes are used during the maturation of the cheese. I wasn’t allowed to see the fromagerie, because it is situated in the part of the Abbey which is reserved solely for the nuns, who normally work in silence. 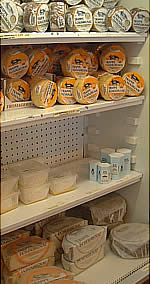 In 1999, the nuns wanted to make a brand new type of cheese, which is their normal cheese with walnut juice added to it. They wanted to use their cheese with another local product, and that is what they came up with. It is truly delicious! Now the entire cheese production comes to more than 85 tonnes a year! This is striking, particularly in comparison with their large output of fruit jellies – 5 tonnes – and jams which come to 6.5 tonnes. Sister Marie-Thérèse tells me that the nuns eat the trappist cheese everyday.

We couldn’t resist a nibble of cheese on the way home, or dipping our fingers into the wonderful honey and the beer jam, just for a taste. But I have found that the best way to enjoy this walnut cheese is very ‘franglais’ – with french bread, homemade spicy fig pickle, and home-brewed malty ale, on a picnic table, in the sun, in rural south-west France.