Visit to the Fromagerie

France is famous for its range of cheeses, and many French people we meet repeat the same assertion that there at least one variety for each day. The Languedoc, or more specifically, the Cévennes, is famous for its goats’ cheese, the Pélardon being the best known thanks to its possession of the coveted AOC label. The AOC label on a goat’s cheese tells you that it has been produced in a very specific region. In this case, Pélardon is produced across four or five departments that straddle the Cévennes mountains, including the Lozère, the Gard, and Aveyron.

The Cévennes, mysterious and shadowy from a distance, is a country populated by chestnut trees, vines and olive groves, small hamlets and isolated outposts. A region inhabited by fields full of sheep and goats, who feed high in the foothills, where it becomes to hot to grow crops such as wheat or barley. A region famous to some for a certain Robert Stevenson and his 12-day hike with a donkey.

After sampling some extremely good goats’ cheese one day at one of the local fairs where you find tempting examples of locally made honey, jams, olive oils and more, I decided to investigate into how the cheese is made. The producer, or ‘fromagerie’ I discovered, is situated between Alès and Nîmes, and receives his milk from the Cévennes. However, he explained as we went around his ‘nickel’ clean warehouse, his cheese is called Pélou, and is not produced by AOC methods. The reason for this became clear shortly afterwards. 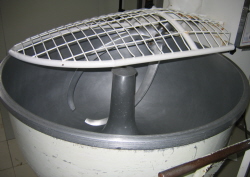 My three children, in tow on this occasion, do not yet appreciate the wonderful taste that is goats’ cheese. So entering a cool chamber full of racks of very smelly, beautifully fresh cheese reduced them to comments and facial grimaces worthy of any torturous school trip. Fortunately, their curiosity proved stronger than their objections, and the first object we were shown was in fact a huge baker’s basin used to mix dough, with a huge metal hook hanging from the mixer. This, it was explained, was used to mix the curds, once the curds and whey had been separated at the farm.

Traditional methods of farming in the Languedoc mean that flocks of goats are kept on the garrigue hillsides and in the Cévennes mountains, feeding on wild flowers and plants that provide a varied diet. This diet gives the cheese its particular flavour. The goats are milked twice a day, their milk is filtered to remove impurities, and placed into large bowls to settle, for 15 – 20 hours at 20°C. An enzyme is inserted into the milk that comes directly from a natural source – the ‘caillette’, one of the seven stomachs of a goat, that receives milk. The enzyme produces the curdled effect on the milk, which makes it almost edible, a fact first discovered, I was informed, when peasants began to eat goats, and realised that herein lay some possibilities! So, this enzyme is now used to speed up the process. Once the ‘petit lait’ has separated from the ‘caille’, the milk is placed into large linen sacks and hung up to drain out the remaining water.

On arrival at the fromagerie, the resulting curd is mixed to increase the smoothness of the texture, a process forbidden by AOC rulings. AOC producers must also fill specially measured pots or moulds by hand with the curds, whereas here we were shown a cement mixer shaped funnel with two shapes that could be attached into its base to control the size of cheese that would emerge. The shapes in effect produce a flow of cheese somewhat like a sausage machine, that feeds into plastic moulds that sit on a conveyor belt in trays. Once the moulds are full, they are moved to a drying room. Heaven for rats, I thought, but the farm cat we met had no chance. Here is where science takes over, for the cheese needs to dry out over one or two days and the air is circulated to precision to remove the humidity. Each cheese tastes different according to its mass and size, and can be traced back to its original farm or herd of goats.

But this is not the end. The second stage is a humidity room where the ‘affinage’ takes place. The cheese is allowed to mature in 90% humidity so that it does not lose its weight. And hidden behind towers of beautiful, round, appetising little Pélous, my girls were quick to discover something more to their taste, a small stock of enormous Comté rounds, brought from the Alps for their ‘affinage’ prior to sale as fresh as possible. Next to them, some impressive Manchego cheese from Spain.

I was a little disappointed not to be able to take away with me some samples of the Pélou doused in red wine, which leaves a spectacular colour. The last customer had robbed me of the opportunity. However, I was delighted with the cheese I did purchase, some of them covered in the producer’s own mixture of ground pepper and herbes de Provence. It was the most ‘goaty’ tasting cheese I have ever bought.

So if you are travelling between the Cévennes and Nîmes or passing across to Quissac, take a short but delicious detour to Montignargues to find the Fromagerie des Loubies at the entrance to the village. You will not be disappointed!