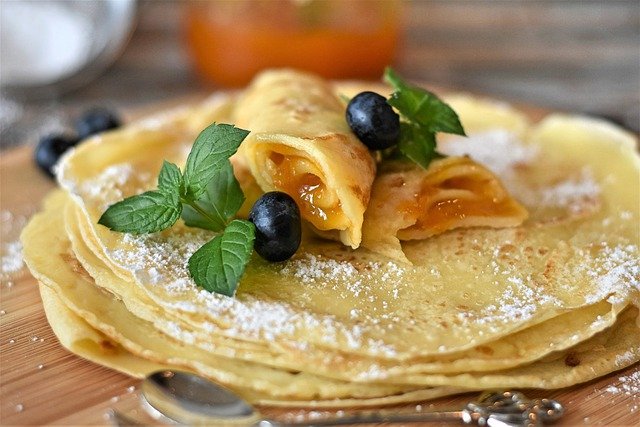 Forget Shrove Tuesday, France’s version of Pancake Day is La Fête de la Chandeleur (or simply ‘La Chandeleur’), held every year on February 2nd. Naturally, crêpes are the star of the show, but the French pancakes aren’t just for eating. There’s also a host of bizarre traditions and superstitions surrounding the sweet treats. Before you whip up the pancake batter and reach for your poêle à crêpe (frying pan), here’s what you need to know about La Chandeleur.

La Fête de la Chandeleur or the ‘Festival of the Candles’ marks the day that Jesus was presented at the Temple of Jeruselum, 40 days after his birth on February 2nd. The Catholic holiday was popularised by Pope Gelasius I in AD 494 and celebrated with a candlelit procession through the streets of Rome. However, La Chandeleur apparently has even older roots—in ancient Rome, similar festivities were held in honour of Pan, the God of the Wild.

2. Crêpes are delicious… but also symbolic

So, why the crêpes? During the Roman festivities, galettes (savoury crêpes) were often handed out to poor pilgrims joining the procession, which is where today’s pancake-eating tradition stems from. The round shape and golden hue of the pancakes are also said to symbolise sunshine and the approach of spring. As La Chandeleur falls between the winter solstice and the spring equinox, pagan worshippers saw this as the beginning of the end of winter, and a time to look forward to spring.

3. It’s one of the most superstitious days of the year

Move over Halloween and Friday the 13th, La Chandeleur might just be the most superstitious day on the French calendar! Superstitions vary depending on the region of France. Still, the most popular ones revolve around the candles carried during the religious procession. Be warned, they are a bit morbid… one legend states that wax dripping only on one side of the candle foresees a loved one’s death in the coming year. Another states that carrying your Chandeleur candle home from church without it blowing out guarantees you will stay alive in the coming year (not very reassuring for those whose candles don’t make it). If that’s not enough for you, there are also some (slightly) more cheery superstitions relating to weather and the crêpes themselves (see below).

The crêpe-making process is also steeped in superstition. Tradition dictates that the chef should toss the crêpes while holding the pan in their right hand and a gold coin in their left. A successful pancake toss is said to bring good luck and prosperity, but if your pancake ends up on the floor… well, this might not be your year! A safer bet for good luck and prosperity is the slightly more bizarre tradition of putting the first crêpe on top of a wardrobe or in a drawer (the jury’s out on how long you’re supposed to leave it there?!).

5. The best crêpes are served sweet (with a side of cider)

Galettes might have been the traditional pancakes of choice, but today La Chandeleur is all about the sweet toppings. Top yours with a dusting of sugar, spoonfuls of jam or applesauce, or a generous helping of Nutella. Don’t forget the perfect accompaniment—a bowl (not a glass!) of cider. Ready to get frying and flipping? Learn how to make the perfect crêpes or if you’re feeling fancy, whip up some Crêpes Suzette, made with caramelised butter and sugar, flambéed in Cointreau or Grand Marnier.

Typically, the French gather with friends or family to eat their crêpes in the evening, although the current Covid rules and couvre-feu mean you’ll have to limit this to your household. On the positive side, while it’s always nice to share, that does mean more crêpes to go around…

6. It’s bad news if it rains on La Chandeleur

Check the Météo (weather forecast) because another superstition about La Chandeleur concerns the French weather. As the saying goes: “Quand il pleut pour la Chandeleur, il pleut pendant quarante jours” or “If it rains for La Chandeleur, it will rain for 40 days.”

Sunny skies aren’t welcomed either. The superstitions also dictate that sunshine means a long winter and misfortune, and cloudy skies mean another 40 days of winter. So, what should we be hoping for? A clear day marks the end of winter apparently, so let’s hope for blue skies with no sunshine or clouds!

7. Crêpes are on the menu for Mardi Gras too

British expats needn’t worry, crêpes are still on the menu for Mardi Gras, too. While the French don’t celebrate Shrove Tuesday or ‘Pancake Day’ as we do back in the UK, they do still celebrate Mardi Gras or ‘Fat Tuesday’. Both festivities are held on the last day before Lent, when it’s tradition to feast on rich, fatty, and sugary foods—all the foods abstained from during the fasting period.

In the UK, this means whipping up a stack (or several) of syrupy pancakes. In France, beignets (doughnuts) are the sugary treat of choice, but crêpe lovers will still find plenty of crêpes being flipped and served during Mardi Gras festivities. France’s COVID-19 security measures mean that Mardi Gras celebrations will likely be cancelled this year, so we recommend staying home and making another batch of crêpes… or British-style pancakes. Or why not both?