Approaching retirement from our university teaching careers, we were ready for new challenges and a life close to the soil, making a product that we both enjoy – red wine!

After a long search, we found a property in Beaujolais, well known for its wine. It was crucial that we had a ‘vigneron’ (wine maker) in place to tend the vines and make the wine, and in return he would receive half the wine production to sell as his salary. We saw several properties and their surrounding vines, but we kept coming back to Maison des Bulliats in Regnie. The house was really much too big, needed a lot of work, and had 7 _ hectares of vines, but it was perfectly situated and close to the delightful village of Regnie-Durette. We managed to go ahead with the purchase, with a loan and by selling our beloved old wooden sailing boat, and in May 2005 we moved in!

We got stuck in to enjoying glasses of Regnie on our veranda, gazing at the most beautiful vista of vines, a distant château and the rolling hills of the Beaujolais. But we were also learning day by day from our vigneron, Pascal, and his parents, which was all quite overwhelming! That was added to grappling with the complexity of French administration and its numerous lengthy forms.

Reality hits, but the wine grapes were good

We had not previously understood the seriousness of the wine crisis in France or globally. There is just too much wine in the world and we had our work cut out for us in establishing a market for our forthcoming September harvest. We were fast realising the enormity of the challenge we faced. Luckily, our vines are superbly positioned, and the first criterion of making a good wine is good grapes. As with any crop, the weather is a huge factor and we were soon to experience some extremes of winds, storms and intense heat.

But our grapes were excellent! 2005 was an exceptional year and we were about to experience our first ‘vendange’ (grape harvest). This was to be organised by Pascal and his parents, who lodged the motley team of students, an ex baker and a police dog handler. Although we were only indirectly involved, Fred was kept busy helping to maintain machinery, pumps and the press, while I lent a hand feeding the hungry pickers. 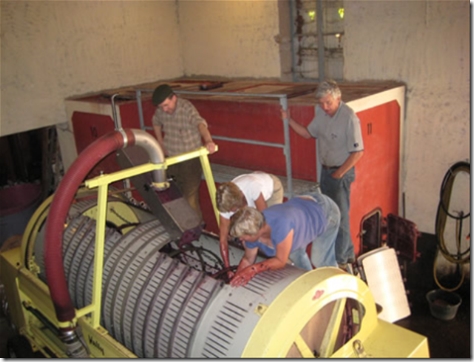 That harvest went very smoothly, but 2006 was more difficult, and fraught with problems. Pascal was becoming increasingly dispirited and his parents less able to cope with the housing and feeding of up to twenty five disorderly pickers.

Between 2005 and 2006, with a huge amount of effort, we managed to sell a good part of our twenty five thousand bottles of Regnie, in France, Holland, the UK and Canada.

We developed our first and then second labels, learning and researching constantly. We bought a fork-lift truck to load the lorries with orders, and I learnt how to fill in the complicated forms that accompany each export order. I visit the customs office in nearby Villie Morgon and have to account for every bottle, whether given as a present, drunk by us or sold. The figures all have to add up; if inspected by the authorities our cellar must contain exactly the right number of litres of wine.

We found out who to employ to bottle the wine on the premises and stack the bottles in the cave, where to buy the wooden palettes for transporting the wine and how to work the automatic labelling machine with all its quirks!

We target restaurants, independent wine merchants and individuals and little by little the wall of wine bottles in our cave diminishes. We presented our wine at the Salon d’Agricole in Paris in March 2006, feeling very green and watching everyone else closely. We met people from the other Beaujolais ‘crus’ at the exhibition. Regnie is the youngest one, having achieved well-deserved cru status only twenty years ago. It is remarkable how different the crus are from each other!

In January 2007 Pascal finally decided he could not continue and would have to find a job elsewhere. Used to selling ‘en vrac’ (in bulk, unbottled), he was not able to develop a bottle market and hadn’t the connections, language or opportunity to travel, which we have. We were immediately plunged into a very worrying situation. We advertised for a new metayer but in these difficult times no-one was interested. A Belgian business man wanted to rent our vines. This is known as ‘fermage’, but as time was short and the vines won’t wait, we decided to continue on our own, which meant engaging people immediately to prune the vines.

We are so fortunate to have found good friends during our time in Beaujolais, without whom we would have drowned. A local vigneron suggested two Turkish gentlemen for the pruning, another found us a delightful monk, and together with a couple of polish men and our wine-producing neighbours, we got through the first hurdle, despite escalating costs.

The next concern was finding someone who was on the spot to make decisions dependant on the weather. For example, when to treat the vines between April and July. Our friend in Morgon arranged for two of his workers, Daniel and Didier, to help us. They also proved to be invaluable during the harvest.

We were now free to concentrate on our sales, which had been neglected during our crisis. We developed our contacts in Canada, and presented our wines, by now including the 2006 , at a serious wine fair for the trade in Utrecht, Holland. They were very well received.

Our next big hurdle was organising our own vendange. We do not have the independent space to house 25 people. Feeding them all would be daunting but I could manage if I had to, I thought. We heard about pickers ‘à la grande journée’ who live locally and do not need food provided but would be more expensive to hire. 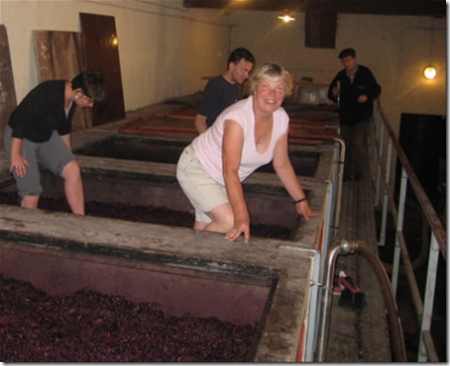 The social security system in France is a labyrinth of rules and regulations, forms in quadruplicate and huge penalties if your workforce has not been declared, and identity cards and work permits verified. The completed forms must be sent and received by the authorities before a hand touches a grape! Our French accountant could deal with this paperwork but for an enormous fee, so I learned how to manage this administrative nightmare, with help from Gerard Brisson, our wine-producing friend from Morgon.

Approval from the cooperative

We will had doubled the quantity of wine since Pascal’s departure, so we approached the local cooperative – a popular destination in the past for the grapes of many producers. These co-ops buy the grapes and make the wine as opposed to the ‘negociants’, who buy the finished wine. It is run in the traditional style with individuals having a contract but also having a say in how the coop is run, and receiving dividends. The president of the cooperative of Quincie was enthusiastic about our possible contribution to the marketing of the wine internationally.

A little while later, we were visited by a senior group of employees, our vines were inspected, and we all enjoyed an English tea and home made biscuits in our kitchen. They were a delightful friendly group, who seemed impressed by our vines. We were left feeling optimistic, but would have to wait for their response. After the August holiday, we, or rather our grapes, were finally accepted and promised a contract.

There was a brief quiet spell at this time as we were in most respects ready for the harvest. The grape press had been inspected and maintained, a high pressure hose bought, and a lorry hired to transport the filled containers of grapes, either to the co-op or to our ‘cuvage’, where the vats would be filled to their brims.

The Turkish team was poised to start, although the harvest date cannot be decided until a week before it starts. The date was finally chosen as the 3rd September, which was later than for many of our neighbours and based on three lots of grape samples taken in sealed bags to the coop, to assess the rising sugar content…

The vendange lasted nine and a half days, and the routine of each day was exciting though unbelievably exhausting and an enormous challenge. We were up at 6.30 and working non-stop till around nine in the evening. 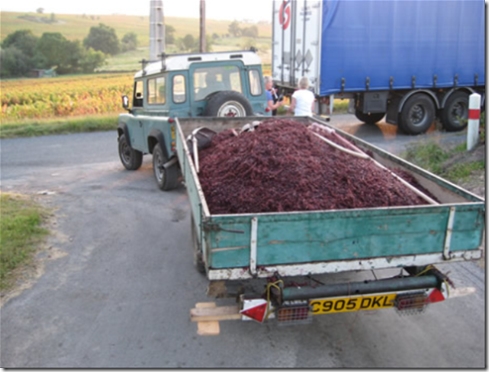 Although I did not have to feed the pickers, our family and friends were also thankfully helping, and they were constantly hungry. The heavy filled containers weighed between 50 and 60 Kg. It was an enormous effort to charge the truck, on some days with only Fred and I on our own, straddling ditches and leaping on and off the trailer to complete the second layer.

Every load of grapes gained category 1 status, each consignment being weighed and the sugar content tested. We sorted the grapes as they tumbled onto the conveyer belt and into the ‘cuves’ (vats), removing leaves and bugs. Our hearts and souls would be a part of this vintage!

All the equipment was cleaned scrupulously after each day’s work, and then we would eat ravenously, washing the meal down with our wine, before tumbling into bed. The weather was fantastic – day after day of blue skies and warm sun.

Making and selling the wine

We had engaged one of the most well-reputed vinifiers in the area to supervise the making of our wine. He arrived each day to test and taste the wine. After one week in the cuve, the bunches of grapes were pressed, and the extracted fermenting juice was returned to the vats. For two weeks after the pressing, the wine was carefully monitored, but Monsieur Dory was already impressed with the quality of our grapes and was completely confident that our wine would be superb!

We needed to focus our minds again on sales. The new wine passed its cru test, last administrative details were completed, some orders sent off to Canada and the UK, and pruning of the vines was organised once more, all before we could return to London to celebrate Christmas with our family.

The following ‘grape year’ as I call it was much easier as we could follow the same pattern. The cooperative was keen to buy our grapes again, and for a second time we received category one status for each load delivered. In spite of another variable summer, our 2008 grapes were superb and we have another excellent vintage.

We found an agent in Brittany and one in London to help ease our workload. A major British supermarket bought most of our 2006 vintage, which gave us space to ‘house’ the 2007 and now the 2008. The food and wine fairs and ‘the France show’ have been our recent focus providing new venues to sell.

Gerard Brisson went on to make an excellent 2008 vintage for us, in spite of another fickle summer, then, in 2009 we heard that we had received a Burgondia d’Or award, after entering a competition. We are thrilled with this additional accolade and now have smart gold shield stickers on our bottles!

Optimism for the future

As complete beginners in 2005 we have climbed a very steep learning curve. We have developed strong and passionate feelings about what needs to happen in Beaujolais, to improve the reputation of this region’s wines which we feel are so underestimated.

The Gamay grape is almost unique to Beaujolais and these lighter fruity wines are an excellent accompaniment to fine food. Cru Beaujolais can be kept for several years. We face the next years with optimism and determination to put Beaujolais and Maison des Bulliats very firmly on the map.