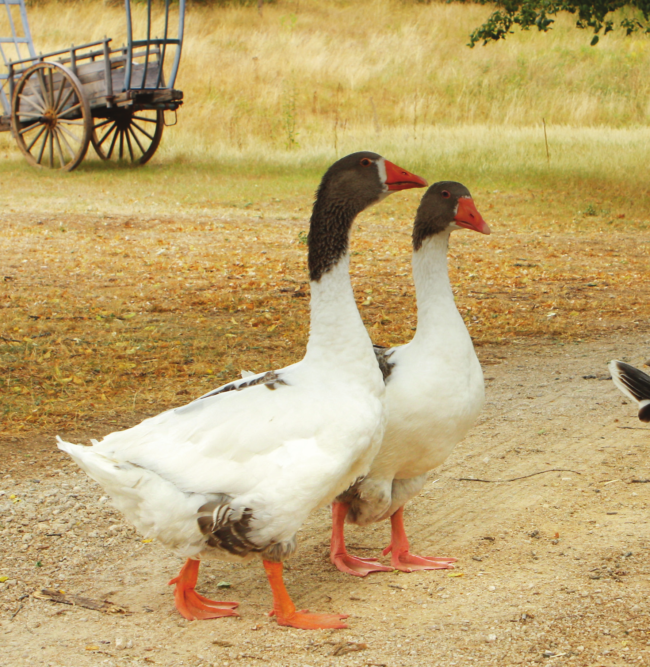 Legendary French chef Pierre Koffmann waxes lyrical about his idyllic childhood in Gascony. In this exclusive extract from his book ‘Memories of Gascony’ he recalls the place of duck and goose on the family menu and how his beloved grandmother prepared her own confit.

My grandmother always kept about a hundred ducks, but only about ten geese, since for her a goose was never as profitable as a duck. Firstly, a goose tends to eat a great deal and is therefore more expensive to keep and secondly, though its breast and liver are larger, they were much too large for my grandparents who always like to keep a few birds for themselves. A goose magret contains too much meat for only one or two people and has a great deal of fat, whereas a magret de canard is just right. The only real advantage of a goose for Camille was the fact that its liver contains very little fat compared to a duck’s and is therefore much better for preserving.

Each duck killing was followed by days when my grandmother prepared the bottles of rendered duck and goose fat which were kept in the dining room cupboard and would play such an important part in her cooking during the coming year. She also made large jars of confits de canard, or preserved duck, which was equally important for her cooking and which is one of the most traditional gastronomic products of southwest France.

You can put all the best parts of a duck into a confit – that is to say the magrets, the legs and the wings – then eat these all through the year, but you can also put in almost everything else, such as the feet, neck, giblets, head and other less attractive parts, which even if you do not eat them (although the peasants always did) can still be used to give a very good flavour to stews and soups. But, whatever you put in a confit, it must first be salted, in order to get rid of any blood or gall that may still be attached to the different parts of the duck, and to give it that very special confit flavour. Camille used an iron marmite into which she put alternate layers of salt and duck, then the duck was left to cure in the salt overnight for about twelve hours. In the morning each piece was taken out, rubbed with a cloth, and put into a cooking pot which contained some melted duck fat. The confit was then cooked very slowly over a corner of the fire where it was not very hot, since too much heat would turn the duck brown and spoil it. The simmering went on for about three hours, but my grandmother would only consider the cooking finished when the pieces of meat were so tender that she was able to pierce them with a bit of straw.

The confit was now left for another night to get completely cold and, in the morning, Camille would take out the pieces of duck by hand, put them into their earthenware jar, and pour over some melted duck fat. It was important that no piece of duck should ever touch the side of the jar and that none of the juice which had collected at the bottom of the cooking pot should find its way there, because it would deteriorate rapidly; however, this juice was excellent when spread on a slice of toast.

Other things which my grandmother made from the birds we kept for ourselves included graisserons, which were the little bits of meat and skin which had got left behind in the pot in which fat for the confit had been cooked; and gahuzagues, a dish made of finely minced goose tripe, which is very good, but which is nowadays completely forgotten, perhaps because of the enormous amount of time and work involved in cleaning and scraping the tripe. The recipe also calls for a bottle of bourrit left over from the time of the vendange, which is not something everybody has easily to hand. And I shall never forget how good a stuffed duck’s neck could be when Camille cooked it. 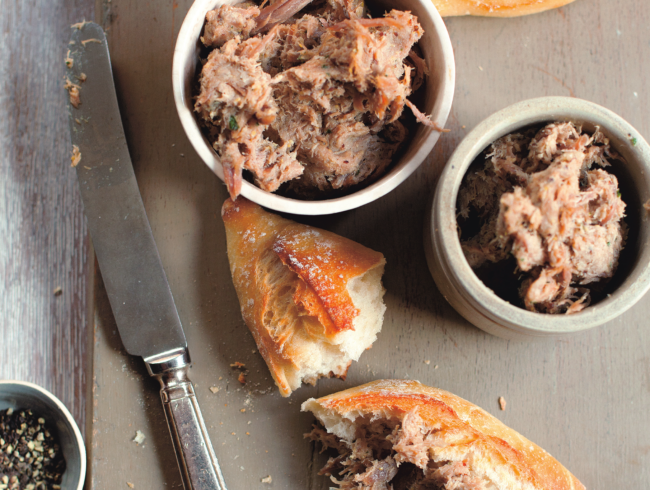 ✽ Cut the pork into 5cm cubes and sprinkle with 25g salt. Leave to marinate overnight.

✽ The next day, gently warm the fat, add the meat, bouquet garni, garlic and wine and bring to simmering point. Cover and cook very gently for 3–4 hours, stirring occasionally with a wooden spoon, until the meat disintegrates. Leave to cool.

✽ Remove the bouquet garni and garlic and work the meat and fat together with your fingers until very well mixed. Adjust the seasoning; go easy on the salt and be generous with the pepper. Put the rillettes in an earthenware pot and keep in the fridge for up to two weeks. 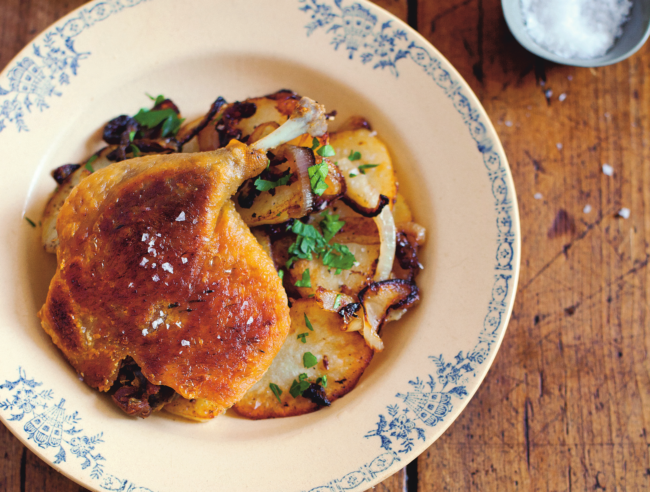 ✽ Cut the duck into pieces – legs, breasts, wings and neck. Keep the feet, head, heart and neck. Skin the neck and keep the skin to stuff, if you like.

✽ Cut the reserved fat and skin into very small pieces. Put 50ml/2fl oz water in a saucepan, bring to the boil, then add the fat and cook as slowly as possible for 1½ hours. Strain the liquid fat through a sieve and keep the small solid pieces to make graisserons. Keep the strained fat in a cool place until needed.

✽ Remove the duck pieces from the salt and wipe off the excess salt and salty juices with a cloth. You may find that you do not have enough fat to cover all the duck; in this case, cook it in two batches – first the smaller pieces (neck, feet, gizzard, head and wings), then the legs and breasts.

✽ Leave the duck to cool completely in the fat, then put the smaller pieces into one stone jar and the legs and breast into another. Do not pack the  pieces too tightly into the jars, as the fat must run in between them. Ladle in the fat, taking care not to pour in any cooking juices, as these will not keep. Keep the confit in a cool place until the next day, then cover with greaseproof paper and store in the fridge or a cold place. If you prefer, you can  sterilise the confit by boiling the jars in water for 30 minutes; it will then keep for many years (even unsterilised, it will keep for up to a year).

✽ To make the graisserons, fry the lumps in a pan for about 5 minutes without adding any more fat. Season and add some chopped garlic and parsley. Do not overcook the graisserons or they will become dry. Eat them when cold. You can also stuff the skin from the duck neck with sausage meat. 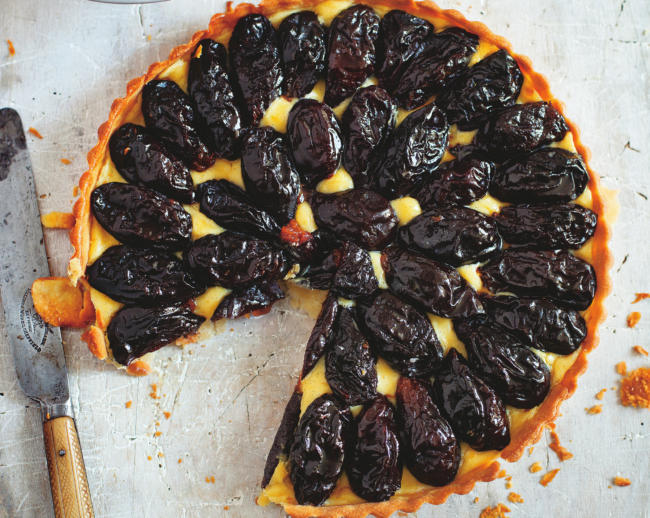 Put the flour on the work surface and make a well in the centre. Put in all the other ingredients and begin by mixing gently with your fingertips, gradually drawing in the flour. When all the ingredients are mixed, work the dough harder with the heel of your hand. Roll the dough into a ball, wrap in a cloth and leave to rest in the fridge for 1 hour before using.

The night before, put the prunes in a saucepan, cover with water and add the tea bags. Boil for 5 minutes, then take the pan off the heat, cover and leave overnight. The next day, drain the prunes and stone them.

Prepare the pastry cream: bring the milk to the boil. Beat the sugar with the egg yolk until pale, then mix in the flour. The mixture should be like very fine breadcrumbs. Gradually pour on the boiling milk, stirring continuously. Pour the mixture into a saucepan, heat it until it bubbles, then cook gently for 5 minutes, stirring all the time. Pour into a bowl, cover and leave to cool completely.

Preheat the oven to 220ºC/425ºF/gas 7. Line a 25cm/10in fl an dish with the pastry and prick the bottom with a fork. Put in the cold pastry cream and arrange the prunes on top; the pastry case should be three quarters full. Bake in the preheated oven for 30 minutes.

Leave the cooked tart to cool completely and serve with whipped cream on the side.