Explanations of the more unusual vegeposts found in French markets. 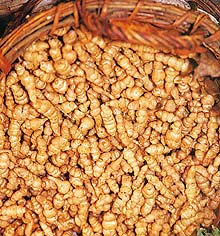 Crosne de Japon (right) are small, twirly tubers, which are tapered at both ends. They are a ‘forgotten vegetable’ (an old and unusual variety of vegetable), and are delcious boiled until tender, and dressed simply with butter, salt and pepper.

Bettes are chard. (Big, with white stalks and green leaves. Looks like a cross between a cabbage and head of celery.) It is simply a green vegetable, and you can use all of it in many ways. Not very helpful, I know, so here are some ideas:

• Chop up and boil all of it, serve with butter, like cabbage or greens.
• Shred the green part, and add to soups and stews.
• Slow-bake large pieces of the white stalks. First brown them in a pan with some lardons, then put them in a low oven, covered, for as long as possible, with chopped or crushed garlic and some liquid (white wine, water or stock). Finally, uncover, sprinkle with gruyere or emmental cheese, turn up the heat, and serve when bubbly and brown. This is also a good method for cooking bitter endives (chicory).

Pumpkins and other squashes:
These stunning vegetables of various colours, shapes and sizes are all over the markets and supermarkets during the autumn. You may also be given a few from friends and neighbours if you are in France at the right time, because they grow so easily, and there’s only so much pumpkin (‘citrouille’) that one family can get through!

Less common in the UK, squashes fill the space of parsnips (which the French are just starting to revive), because of their sweet taste and creamy, comforting texture. The can, however, be put to about a zillion other uses! Here are some ideas…
– Roast with garlic, oil and salt, and served with roast dinner. (Then the leftovers go into soup.)
– Roast with spices, like ginger, cardamon, cinnamon, cloves, pepper and paprika. Plus, of course, oil or butter and crunchy sea salt.
– Roast with oil and seasoning, top with grated cheese and turn up the temperature to get a bubbley, cheesey crust.
– Make into a simple soup; roast or gently fry the flesh with a little leek and potato, top up with a bit of chicken or vegetable stock, whizz up until smooth, season and serve. For variations on this idea, the soup will be delicious with the addition of garlic, spices, cream, fried bacon, oilve oil and herbs, chilli, or soaked and stock-cooked ‘haricot blancs’.
– Have as a dessert, either in a traditional set pie, or fried or roasted with bananas, sugar, honey, spices, rhum… and serve with cream or creme fraîche.