What those special labels mean 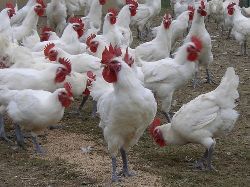 King Henri IV of France is reputed to have promised “A chicken in every peasant’s pot every Sunday.” He supposedly made the statement during his coronation address around the end of the 16th century.

Four hundred years later, the French come close to his ideal. Today, each person in France consumes about 9 chickens (along with 1 turkey, 1 duck, 1 guinea fowl, and 2 kg of other poultry such as goose, quail, and pigeon).

This could mean that each family of four, assuming that they share a single chicken at a meal, eats a chicken about two out of every three weeks. But the reality today is that the French, like other nationalities, also eat some of their chicken in the form of fast food and other forms of ground and reshaped chicken meat.

Not so much in the Indre, however. The number of poultry breeders, and the amount of small farms in the countryside ensures that most type of fowl comes fresh to the table. The fridges and freezers of the Indriens are not yet groaning with processed food.

In 1999, the French produced over one-million metric tons of chickens. France is the largest poultry producer in the European Union and fourth largest in the world after the United States, China, and Brazil. Slightly more than 40 percent of the French production is exported, mainly to the Middle East. Three large producers — Doux, LDC, and BSA-Bourgoin — account for about two-thirds of the country’s total production. Although factory-produced chickens dominate the market overall, over 15 percent of the production is now free-range chickens, and in the Indre, “poulet fermier” is commonplace.

About 30 years ago, the French government developed a free-range production programme for all animals bred for meat. Chickens produced within this project meet a wide range of production criteria such as genetics, feed, and duration of growth.

The French Ministry of Agriculture grants the Red Label (Label Rouge) to farmers’ groups or cooperatives whose production matches the programme’s standards. Red Label poultry production is subject to thorough controls at each stage of the process to ensure minimum quality standards. Chickens produced under the Red Label programme come from special breeds, selected for their low growth rate, high meat quality, and good skin. These birds have a growing period that is approximately twice as long as factory chickens. They are reared in the open air in small groups and fed a natural cereal-based feed. No animal matter or growth factors can be used in the feed.

For many in France, the ultimate chicken is the poulet de Bresse, which has an AOC award, like wine.

Following an initial period not exceeding 35 days, the birds are raised on a grassy area which provides their primary food. This is supplemented by local cereals and skimmed milk for a period of 9 weeks in the case of young chickens, 11 weeks for hens, and 23 weeks for capons. Each chicken must have a minimum of 10 square meters of space and a single flock cannot exceed 500 birds. The final phase of the growing process is done in wooden cages in a dim, quiet, and well-ventilated structure. The chickens are caged for at least 8 days and capons and hens for 4 weeks.

Other specially produced birds are those from Les Fermiers de Loué in Le Mans. These are grown on for at least 84 days free range, and fed with 80% cereals. Contact www.loue.fr for more information.