The culinary legend takes a tour of his beloved homeland 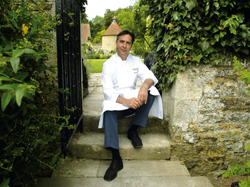 Raymond Blanc grew up in the village of Saône in Franche-Comté, which is an area, he says, of “so much character and beauty”. Known as “the garden of France”, the region is a vibrant tapestry of forests, lakes and mountains, from which emerge fast-flowing rivers.

Although Franche-Comté is not the most popular tourist destination, it’s a beautiful part of France and deserves to be on every traveller’s agenda. What’s more, it’s just a short drive from Alsace and Burgundy.

“As for Burgundy,” says Raymond, “a couple of years ago my family and I spent three nights on a barge meandering lazily along the Canal de Bourgogne, stopping off at a village here, or a village there to stock up on food and wine. It was one of the most pleasurable holidays of my life.”

Here, we give a guide to three parts of eastern France that are dear to Raymond’s heart: Alsace, Burgundy and the most cherished of all, Franche-Comté…

Franche-Comté
What to do
Geographically, Franche-Comté is really two regions (although there are four départements: Haute-Saône, Jura, Doubs and Territoire de Belfort) – the high valley of the Saône is wide, gently rolling country with a certain rustic simplicity, while the Jura Mountains are more rugged with dense forests, sheer cliffs, deep gorges and torrents of water. The latter is the home to the famous Comté cheese.

In winter, this means cross-country skiing over 2,000 kilometres of marked trails and in summer, rafting along the gentle Lison and Loue rivers or the more challenging Saône or Doubs. Nature lovers can climb, bike and hike the mountains or explore the hills that are honeycombed with over 4,000 caves. 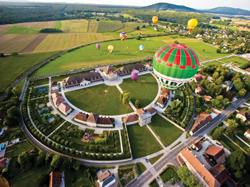 The streams and lakes provide world-class fishing. Or why not see it for all its glory – and go hot air ballooning? Or go boating on the Lac de Chalain, in the Jura hills. In Saut du Doubs (near Villers le Lac, on the Swiss border) there’s an impressive waterfall, accessible by boat from Villers. Pretty towns include Arbois, where Louis Pasteur once lived, and Château Chalon perched on a cliff overlooking the famous vineyards. In Lons le Saunier, you can visit – wait for it – the Laughing Cow Cheese Museum. Metabief and Les Rousses are small ski resorts with summer activities; and there are plenty of river cruising tour operators along the Saône.

The region’s capital is Besançon, a historic city nestling beneath its ancient citadel – a stronghold fortified by the great 17th century military architect Vauban – in a loop formed by the river Doubs. 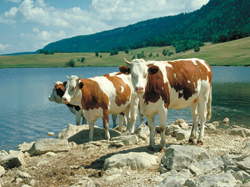 Besançon boasts the oldest, and one of the finest, public art galleries in France, with an impressive collection of old masters and 19th century French art, including Matisse, and works by Titian, Bellini, Rembrandt and Rubens. It has been nicknamed the “petit Louvre”, on account of the richness of its collections.

Besides its Musée des Beaux Arts, the city has two other major museums, the Museum of Time, housed in the 16th century Granvelle Palace, a jewel of the French renaissance, and the Museum of Resistance and Deportation. There is also a fine cathedral, the birthplace of Victor Hugo, and river cruises.

Where to Stay
The region’s capital, Besançon, has a handful of good hotels.
If you like small and quaint, then you’ll love Charles Quint (00 33 3 81 82 05 49; prices from €65 per room). It has nine rooms, but is full of atmosphere, bonhomie and is an indisputable little gem.

Moving further afield, to Port-Lesney in Jura, Château de Germigney (00 33 3 70 96 00 00) was once a Marquis’s home and is now a hotel in which each room is like an art gallery. There’s a pool, cookery classes and lakes upon which to gaze while pondering which wine to order for dinner in the gourmet restaurant. Prices start at €130.

Where to Eat
If you are in Besançon do not miss the chance to eat at Le Vin et L’Assiette (00 33 3 81 81 48 18), run by Bernard Le Roy. On the ground floor is the dining room; downstairs is the vaulted cellar – wine is served by the glass. Beef, duck, lamb: they are all on the menu, along with calf’s head with grebiche sauce. The menu changes every six weeks.

Alsace
What to do
As December approaches, why not make a flying visit to the region’s capital for the Christmas market, an annual event held around Strasbourg Cathedral. A riverboat tour is a pleasant way of seeing the historic city, and the Petite France quarter is the old town and particularly worth a visit. It is located on the Grande Île (Main Island), where the river Ill splits up into a number of canals and cascades through a small area of medieval half-timbered houses and baroque sandstone buildings.

For museum lovers, Mulhouse is home to the French national railway museum as well as a car museum. The Alsace Open-Air Museum (Ecomusée d’Alsace) is near Colmar, and is the country’s largest open-air museum. Don’t miss Haut-Koenigsbourg castle in the Vosges near Strasbourg, or Kintzheim – the Eagle Park (Volerie des Aigles), a centre for the conservation of eagles and birds of prey. A trip to the Vosges mountains offers opportunities for hiking, mountain-bike trails, nature trails and skiing in winter.

Where to stay
The ivy-walled Château d’Adomènil (00 33 3 54 40 80 63) is elegantly decorated, set in a forest, with ducks quacking happily on its moat. This hotel is in the countryside but is also only a 30-minute drive from Nancy and not far from Strasbourg. The restaurant is popular, too, and you cannot leave without tasting the rum baba, the Russian-Polish cake, over which rum was poured for the first time in Lunéville in the 18th century. Prices per room start at €175 per night; prices for suites begin at €235.

Nestling between Alsace and the Vosges mountains, the tucked away Hostellerie La Cheneaudière (00 33 3 88 97 61 64) in Colroy-la-Roche is another hotel renowned for its cuisine (and it has an indoor swimming pool). Prices start at €200 per suite.

Where to eat
As with the architecture of this region, the food has Germanic influences. Sauerkraut is devoured by the bucketload, and the Alsaciens also like their beer (they gave the world Kronenbourg). Similarly, the most popular white wines are Riesling, Sylvaner and Gewürtztraminer.

The list of restaurants to try should include La Maison Des Têtes (00 33 3 89 24 43 43), which is the gastronomic highlight in the historic city of Colmar. Built in the early 17th century, the restaurant-hotel owes its name to the grotesque masks that decorate the building’s compelling facade. There are four menus, starting at €27; specialities include home-made goose foie gras, frogs’ legs with parsley butter, and crème brulée flavoured with Gerürztraminer liqueur.

You can also visit the Haeberlin brothers’ three Michelin-star restaurant www.auberge-de-l-ill.com ; 00 33 3 89 71 82 83) in Illhaeusern, where the food is exceptional.

Burgundy
What to do
Dijon and Beaune are both worth an overnight stay. Dijon (which is just one hour and 40 minutes from Paris by TGV) has a historic city centre, with old narrow streets, and houses built in the local pale honey-coloured stone; of particular interest to visitors are the Palace of the Dukes of Burgundy, and the gothic Cathedral of Saint Bénigne.

In Beaune, meanwhile, Les Hospices de Beaune (the medieval hospital) is a must-see and one of the most unusual ancient monuments in France. Wine-lovers will not be bored: visit the Château du Clos Vougeot, or the Château de Pommard, and then stagger off to the Burgundy wine museum. After lengthy tasting sessions, shake off the cobwebs with a stroll in the Morvan regional natural park.

The Cathedral at Autun – one of the finest Romanesque cathedrals in France, with remarkable sculptures – is in the heart of the Morvan hills, while at Cluny, don’t miss the old town and the remains of the Benedictine abbey, once the largest church in Christendom.

Find time to visit the Cistercian abbey at Fontenay, near Montbard and the Romanesque churches of Burgundy, including the remarkable Abbaye de Vézelay (starting point of one of the main pilgrimage routes to Santiago de Compostella).

Where to Stay
Take a barge and travel in total luxury with your own swimming pool along the Canal de Bourgogne. It is like having your own private villa with the added benefit of ever-changing scenery outside the windows. The route can take you to Escommes, Dijon, Seurre, Digoin, and St Léger. For more details: www.afloatinfrance.com; 0207 921 4000.

The Montrachet Hotel is a former country inn surrounded by stables, and it showcases the very best of the local produce. Think simplicity meets rustic charm, and there you have the Montrachet, and if you don’t stay the night then at least stay for lunch or dinner. Rooms start at €120 per night.

Those with little disregard for their credit cards will want to check in to www.georgesblanc.com (00 33 4 69 41 00 07). With its “spa de charme”, duo of swimming pools and beauty salon, this hotel is utter luxury. What’s more, it’s acknowledged as having one of the five best wine cellars in the world, with more than 135,000 bottles. As you work your way through the wine, stop only to dine on such delights as chartreuse asparagus with crab and caviar or the famous Bresse chicken. It doesn’t come cheap: a night costs a minimum of €180, and dinner will double that figure.

Where to Eat
Gourmets will never be disappointed in this part of France. There is Maison Lameloise (00 33 3 85 87 65 65) in Chagny (Saône-et-Loire). They say that long ago the Dukes of Burgundy, Philippe the Bold and Jean the Fearless, were accustomed to stopping off for a bite to eat in Chagny because of what was offered on the table. Three generations of the Lameloise family have brought life to this former post house. The tasting menus range from €110 to €170 and specialities include fraîcheur of crab and blue lobster, Brittany langoustines and French caviar. Costly yes, but why not be bold and fearless like the Dukes?

If there’s anything left in the bank after the meal, you could try Abbaye de La Bussière (33 3 80 49 02 29) in Bussière-sur-Ouche (Côte-d’Or). This hotel-restaurant – a magnificently-restored ancient Cistercian abbey – is surrounded by a lake and botanical garden. Prices for lunch €26; the menus for dinner start at €60.
And whilst you are in Vézelay, why not eat at the celebrated Marc Meneau run by M. et Mme. Meneau.

This article first appeared in Issue 83 (Nov/Dec 2010) of French Magazine, when Raymond Blanc was the Guest Editor.