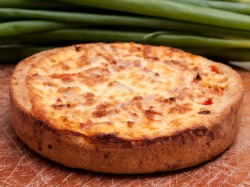 There’s much more to Lorraine than its famous quiche, which would struggle to contain the variety of smoked meats and cheeses typical in this part of France. The region’s mountains, rivers and forests, its orchards and vineyards all contribute something to the local gastronomy.

In a bid to make the most of what’s on offer locally, the people of Lorraine have over the years developed a number of pork based recipes designed to showcase what is a key ingredient from the area. As well as hams, sausages (fuseau Lorrain is smoked and ready to eat like salami) and pâtés, the meat is used to make pies and quiches.

Quiche Lorraine brings together three simple ingredients: bacon, eggs and cream to great effect. Two other specialities include potée Lorraine, a dish combining boiled meat and cabbage with stew vegetables such as carrots and potatoes. Pâte Lorrain, however, is something different altogether – pork and veal served with a white wine sauce and baked in puff pastry.

Andouille (tripe sausage) and chitterlings are popular in Val d’Ajol and venturing higher up into the Vosges mountains, where cattle graze, are farms producing cheese. Brouère is firm and formed into large wheels, whilst Munster-Géromé is soft but full of flavour, owing to its status as a ‘washed rind cheese’. It is protected by an AOC label.

The Vosges are also home to lakes and rivers teaming with trout where you can enjoy a day’s fishing and catch your own supper. The surrounding forests are where boar live, alongside deer, pheasants and rabbits. Hunting breaks are organised in autumn and winter and may be combined with wine tasting trips.

There are three main areas within the small wine growing area of Lorraine. Côtes de Toul is the biggest. Its vineyards west of Nancy are worthy of an AOC label – the only one in the region attached to wine. Côtes de Toul produces red, white and rosé wines (known as vin gris). In addition to Côtes de Meuse and Côtes de Moselle (around Metz) are some very small producers indeed.

Beer is big business in Lorraine. As the country’s third largest producer, beer museums are amongst this region’s tourist attractions. None other than Louis Pasteur is said to have carried out research into fermentation at the Tourtel brewery in Tantonville. Brandy too, is made in Lorraine. It’s just one of the ways that the wealth of Mirabelle plums and other local orchard fruits are used.

FRUIT OF THE EARTH

Plums and raspberries make fruit tarts look irresistible. You can also buy liqueur-filled Mirabelles. Madeleine cakes from Commercy are another local delicacy, as are almond macaroons and bergamot sweets from Nancy, sugared almonds from Verdun and redcurrant jam from Bar-le-Duc – the seeds are traditionally removed by hand (using a goose quill) which pushes the price up.

At the cheaper end of the market is the mineral water bottled in Vittel. Drink it or bathe in it at the spa… the choice is yours!