As with every region in France, Poitou-Charentes has its own speciality food and drink. Below are a few things you wouldn’t want to miss out on when visiting the region. 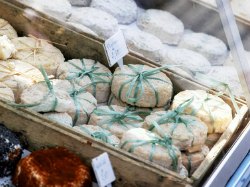 The Poitou-Charentes boasts many independent goats cheese producers. The log shaped French goat’s cheese known as Chèvre à la Coupe can be cut into small discs and enjoyed with a glass of local Pineau. Chabichou du Poitou is a small cone shaped cheese covered with a fine, white rind. It is soft yet firm and becomes crumbly when mature. The production area is limited to Haut-Poitou, Deux-Sevres, Vienne and North of the Charente. Another speciality cheese is the Mothais sur Feuille, a flat disk with a natural rind loosely wrapped in a leaf. A great recipe for goats cheese is tourteau fromagé.

This region is famous for the sweet aperitif, Pineau des Charentes, a fortified wine. This makes a lovely base for a sauce, such as stuffed chicken breast with a white Pineau sauce or to add to a pot of fresh mussels.

Echiré butter is considered as the best in the world, known for its slight hazelnut taste. It has the AOC label (Appellation d’Origine Contrôlée). This label is awarded to agricultural products whose character is dependent on the place where they are made. The quality of Echiré butter is the result of the quality of the milk, which comes from cows feeding on land in and around the small village of Echiré, between Poitiers and La Rochelle. A collective of farms make up one of the few remaining independent butter producers in France and use the same machines they have used since the early 19th century. 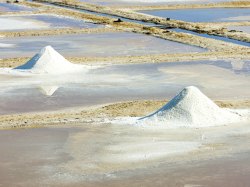 Salt is an essential element to cooking and even more so in French cuisine, known for its rich salty dishes. It is on the island of Ile de Ré that salt workers harvest this ‘white gold’ and it is one of the natural treasures of the island. The sunny climate and lack of pollution make this a perfect place for salt production. This white gold is a favourite amongst chefs not just in the Ile de Ré but all over France. The crystals are harvested manually from June to September. They are raked into piles to encourage the water to evaporate. Look at for the Sauniers de l’Île de Ré brand!

With a long stretch of coastline, it is no wonder that seafood is famous in Poitou-Charentes. Fresh prawns, mussels and oysters are available in abundance. Perhaps the most renowned seafood is the Marannes oyster, known especially for their distinctive production. The oysters are bred out at sea and then matured in shallow ponds known as ‘claires’. In these ponds grow blue ‘navicule’, a type of seaweed and this gives the oysters their green colouring. It is said that the high quality is down to the mixture of fresh and salt water as well as the maturing process. Some producers say it is the colouring that gives them a distinctive flavour. You can find delicious fresh oysters served in one of the many seafood restaurants on the harbour in La Rochelle.

This sweet butter biscuit is a speciality of Poitiers. As well as its delicious taste, the biscuit has another unique feature. Traditionally it was shared by hitting it in the centre so it forms smaller pieces. The biggest pieces were given to those with larger appetites. Broyé du Poitou literally means ‘crushed from Poitou’.