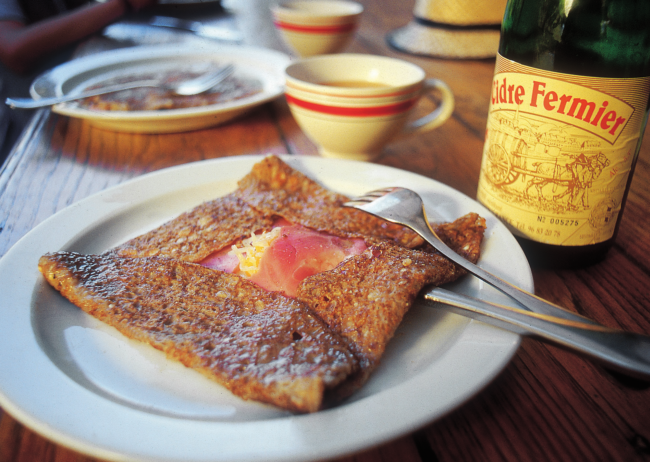 Plateaux of fruits de mer and delicate sweet crêpes are just some of the things we look forward to eating on most of our holidays to France. In Brittany, where they are both considered specialities of the region, visitors are encouraged to fill their boots.

Many Breton delicacies are popular across France and even further afield… perhaps it’s not surprising given the buttery goodness of its galettes and the quality of the cider produced from a variety of different apples.

It finds its way into all sorts of dishes – moules Bretonnes are even steamed in the stuff. Cider is often added to sauces and as you can imagine, goes especially well with pork. Of course you could choose to wash down any number of dishes typical of the region with some cider, which is traditionally served in ceramic bowls like tea cups. Alternatively, there is apple juice from the orchards around or mead, known here as chouchen.

A serving of cider and a savoury buckwheat galette make a lovely lunch. You’ll find there are plenty of crêperies to choose from and vans that do the rounds at markets, where you can watch your pancake take shape in seconds and choose from a long list of sweet and savoury fillings.

TASTE OF THE SEA 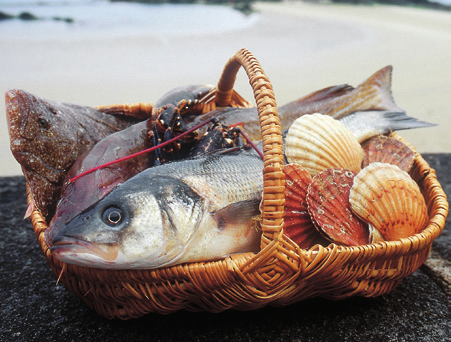 Recently, edible seaweed has become very popular here. It comes in crêpes and is more nutritious than the standard sugar and lemon variety. Look out for the words ‘aux algues’ on the menu… or steer clear of them, depending on your stance.

The local shellfish never looks more appealing than when it is presented on a bed of seaweed and crushed ice with wedges of lemon and pins at the ready. Oysters from Cancale and scallops from Erquy are some of the best seafood that Brittany has to offer. A cold bottle of crisp white Muscadet will go nicely!

Cotriade is the Breton equivalent of bouillabaisse, the fish stew native to Provence. This version is made with pork, potatoes and a selection of white fish along the lines of conger eel . and whiting. Kig ha farz is meatier still – a stew packed with pork, beef and a variety of vegetables.

Order either of these two hearty dishes and there’s a risk you might have to turn down dessert, especially when there’s a basket of French bread on the table (which is invariably the case) and plenty of sauce to dip it in… 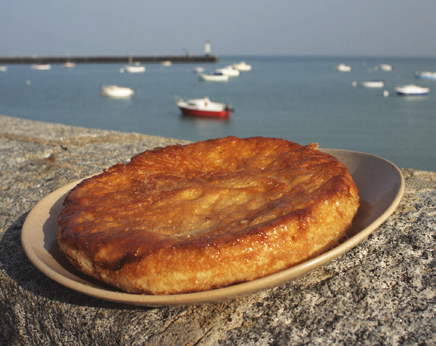 That would be a shame anywhere in France but in Brittany, delicacies such as kouign aman are rich and full of butter. Kouign aman is a pastry from  Finistère that is crunchy on the outside and gooey on the inside. Far Breton on the other hand has much in common with a clafoutis or flan. This dessert is made with prunes instead of cherries. 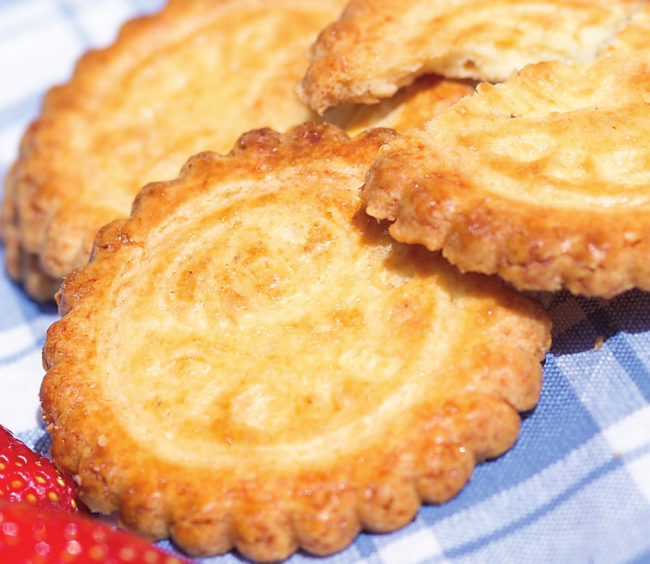 As a compromise to your bulging belly, you might be able to find just enough room to sample a Breton galette, a bright yellow biscuit that takes it colour from the prime ingredient in many of the region’s dessert recipes – butter. Or maybe just take them home in a doggy bag so you can share the best of Brittany with others at home.