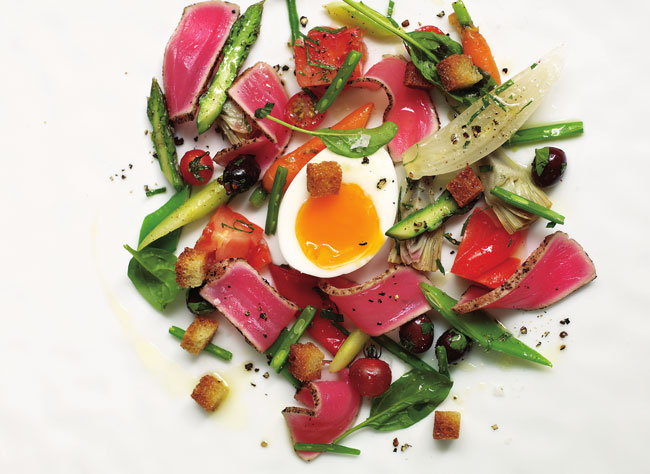 As a native Parisian and the head chef at a Michelin-starred restaurant, Danyel Couet knows a thing or two about the fantastic flavours of everyone’s favourite capital city…

Salt and pepper the tuna and fry it for about one minute on each side in a hot pan without any fat. Cool in the refrigerator.

Separate the green beans lengthways and then slice the tomatoes into thick pieces. Now separate each sardine into four pieces, halve the artichokes, separate the carrots and slice the French beans into 2cm pieces. Mix together all of the vegetables, sardines and olives, and then season them with salt and pepper.

Mix together the vinegar, garlic and oil, and then add the salt and pepper. Pour the vinaigrette over the vegetables. Thinly slice the tuna and distribute it on the salad, along with the croutons and egg halves.

Garnish with spinach, basil and parsley.

Originally published in the FrenchEntrée Magazine