An area little known to Australians

Compared to more southerly regions, such as Provence or Aquitaine, Alsace receives fewer visitors from English speaking countries. But Alsace has lots to offer: a sunny microclimate, a vast cultural heritage, beautiful landscapes with castles, the Vosges mountains and charming villages surrounded by vineyards… just three hours from Paris by TGV! What better place for French Moments to hold its intensive French course?

Kaysersberg is located on the Alsace Wine Route, which Australian visitors will find very different from the Hunter and Barossa Valleys. The Alsace Wine Route runs from Marlenheim to Thann, criss-crossing the Alsatian vineyards from north to south. For many, it is considered France’s most beautiful tourist route, featuring charming villages and little towns such as Riquewihr, Colmar, Eguisheim and Ribeauvillé. They are often made up of old medieval ramparts, winding alleyways that bloom with magnificent geraniums, winstubs (local pubs), half-timbered houses and medieval churches.

Alsace boasts a wide range of historic buildings, from Romanesque to Gothic and Renaissance. Cities like Strasbourg and Mulhouse prove that Alsace can adapt to the 21st century too.

Kaysersberg, a charming medieval town with a rich history 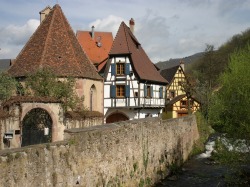 Kaysersberg, meaning in Alsatian dialect ‘Mountain of the Emperor’ is located on the strategic route linking Colmar to Nancy across the Vosges mountains. In the Middle-Ages, the Lords of Kaysersberg consolidated the defences of the town to block entry to the valley and to control passage there. The little medieval town naturally developed at the foot of its castle and in 1354, Emperor Charles IV recognised the alliance of 10 free Alsatian cities in one league: the Décapole.

The Décapole was defined by a military alliance and something particularly rare at the time, financial aid in the event of bankruptcy. This alliance ended in 1678 when king Louis XIV annexed Alsace to France.

A mini tour of Kaysersberg

When coming from Colmar, you are likely to park your car in the large car park on Rue de l’Ancienne Gare, which is bordered by the medieval ramparts. Your visit to Kaysersberg should start by walking through Rue du Général de Gaulle, the town’s high street.

The first impressive building in Kaysersberg that you will notice is the Town Hall (la mairie), built in stone in 1521 in Rhineland Renaissance style. Its façade displays a pretty bay window over two storeys and, to the left, a stair turret. Kaysersberg’s tourist office is located within its walls. 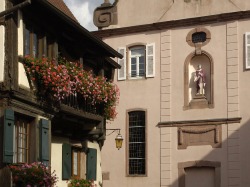 The next monument along the high street is Kaysersberg’s church Sainte Croix. The square in front is bordered by some of Kaysersberg’s most famous half-timbered houses, often pictured in postcards. One of them – the 16th century Loecken House – holds a famous pâtisserie that specialises in Alsatian produce.

200m further is the Badhus which dates back to 1600 and originally served as a hotel. It now houses exhibitions run by the municipal council. Here, the Rue du Général de Gaulle crosses the the River Weiss by a famous fortified bridge (1514). The river separates the old city and the upper part of town. A small and curious shrine devoted to the Virgin stands in the middle of the bridge.

The first house of the upper part of town to the right is named Faller-Brief House. This very picturesque house built in 1594 includes an almost-square main part and a fairly deep off-centre forepart, with a small bay window and a gallery. 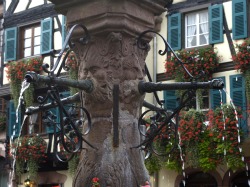 Further on, the Albert Schweitzer museum is dedicated to the 1952 Nobel Peace Prize winner. The house was formerly a protestant church in which Albert Schweitzer was born in 1875. Schweitzer, an Alsatian theologian, organist, philosopher, physician and medical missionary, was born at the time when Kaysersberg was annexed by Germany. He is known in France for having founded and maintained the Albert Schweitzer Hospital in Lambaréné, now in Gabon.

A little walk further along and you will reach Place Gouraud, a square marking the end of the medieval part of Kaysersberg, bordered by the médiathèque where our French lessons will take place on the 2012 course. You can then decide to walk back to the car park through a peaceful and shady walk along the outside of the town’s walls or back through the town centre.

If you are staying overnight in Kaysersberg, don’t miss visiting the ruins of the 13th century castle which overlooks the city from 50 metres above. The castle had a military role, watching over the road linking Lorraine to Alsace and was ruined during the Thirty Years War. The view from its summit offers a panorama of the city, the vineyards, the Plain of Alsace and the Black Forest in Germany beyond.

What do Australians love about Kaysersberg and Alsace?

The region: beautiful villages and small towns steeped in history are so different to what you find in Australia. You feel like you go back in time to a place where life had a different rhythm. 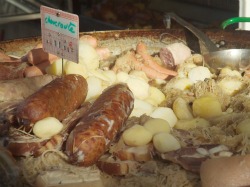 Vineyards: learn about the wines from Alsace and have a taste at the many vineyards. There are some similarities between them and the sweeter white wines from Australia, as settlers from Germany and Alsace took their methods and grape varieties with them.

Gastronomy: this area of France is known for its hearty cuisine. You have to try the choucroute (sauerkraut), bretzels, tartes flambées (flammenkuchen) and kugelhopf!

History: every house tells a story and each town has plenty of history and culture to keep you intrigued. The architecture takes you back to the Medieval era where knights on horses used to ride through town!

Christmas: when Advent arrives in Alsace, Kaysersberg’ streets are adorned with sparkling decorations, animated facades and illuminated monuments. Pretty little wooden chalets are set up in the centre and are individually decorated. The Christmas markets begin at Advent and finish shortly before Christmas.

How to get to Kaysersberg

If travelling from Australia, you can take a flight to either Paris Charles de Gaulle, Zurich or Frankfurt Airports and from there rent a car or take a train. The TGV from Paris-Gare de l’Est takes just over 2 hours to Strasbourg, and also stops at Colmar and Mulhouse. There are also trains running from Zurich airport to Basel in Switzerland where connecting trains link to Colmar via Mulhouse frequently. Colmar is located 10 km away from Kaysersberg and taxis and coaches are available.