Katie and Greg from Melbourne set up home in the Dordogne 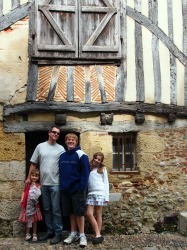 In February 2011 Katie and her husband Greg moved from Melbourne in Australia to Eymet in the Dordogne with their three children (15, 12 & 6) and two dogs in tow. Here she tells FrenchEntrée what prompted the move and how the family is getting on so far. You can follow their progress on the Closed for Lunch blog.

I left my last job to look after my father who passed away in February 2010. After his death, my husband, kids and I travelled through Holland, Switzerland, Italy, France and Belgium in a campervan. My parents had always wanted to do this journey but never made it, so we lit candles in their memory at every church we visited along the way. When we were driving through SW France, something inside me changed. I can’t quite explain it, but I knew this was where I wanted to live and raise my family. I told my husband who said “Why not? Life is short, let’s do it!”

What were the reactions of your friends and family?

Everyone supported our decision, with common replies of “I’d do it if I could” or “Go for it, what an experience” so I set about finding out how to make it all happen.

What preparations did you make before you went out?

I first called the French embassy to find out what our options were. Since my husband was a Belgian citizen, the children and I were able to enter France without a long term visa, but would have to apply for a carte de sejour within two months of arriving, allowing us residency in France.

Prior to this, I needed to register our marriage and children with the Belgian consulate, have all birth and our marriage certificates authorised by the Apostile in Australia, obtain documentation for the dogs and start organising removals and customs documentation. This took four to five months.

At the same time, I began researching where we would actually move to: a tourist destination close to a large town and within reasonable distance of a city. I wanted schools and basic necessities and a train station or airport not too far away. This narrowed it down to the southern Dordogne area. Bergerac was close by with Bordeaux a little over an hour away.

But how to find a rental whilst we looked for our own home? A friend came across a website called The Getaway Guru, founded by an Australian lady who specialises in helping Aussies find accommodation in France and Italy. After many emails and phone calls made on our behalf, we had a lease sorted. All that was left was the move! 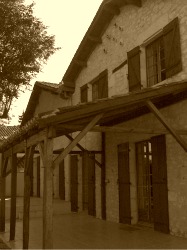 After a night in a nearby hotel to sleep off the jetlag, we collected our hire car and spent a few hours searching for the customs area to collect the dogs. Then we hit the road towards Cuneges, where our rental home was waiting.

How did you go about finding your home?

The house hunt was a little less complicated, though it was six months before we decided on a property. Many of the estate agents spoke English or were English, so communication was a breeze. The difficulty was finding what we wanted. Real estate works very differently here – many agents can be selling the same house at differing prices, varying on their location details also, so it is nearly impossible to narrow the search by location or price in a web search.

We have settled on a house near Eymet, it is an old stone barn conversion and has a lot of charm. It needs cosmetic work, but it is habitable. Our first step is to convert the other barn into a gîte. We are hoping to have this ready for next summer. It is quite a large undertaking but we have seen many examples of the same, so we know we can make it happen.

What have been the main challenges?

Apart from the above, the language, although many of the French I have met are fluent in English. As Greg (who is a native French speaker) keeps reminding me, you are in France – speak French! We have hired a tutor to help the kids with their homework. Their school has also provided extra French lessons for them. I have started lessons at a community centre and am understanding a lot more. The other challenge has been driving – I still get in the passenger seat to drive!

How have you benefitted from the move?

Reflecting on our move and the last nine months in France, I’d have to say that, ultimately, it all comes down to patience…. nothing happens quickly here. Often when it does happen, it might not be quite what you expected. For me, it has been worth it so far. We are leaving more hurdles behind us and slowly moving forward to accomplish our dream.

What are the main differences between life in France and life in Australia?

Australia has in many ways adopted the 24/7 lifestyle. Here, the shops close between midday and 2pm for lunch and they close by 8pm at night. If they are open on a Saturday, they will often be closed on Monday. Only a handful of shops are open Sunday mornings. I feel like I have stepped back in time. The no rush lifestyle has taken a bit of getting used to but I like it. I have also had to become more accomplished and organised with cooking… if we forget to make it to the shops on time, it’s a pot luck meal! 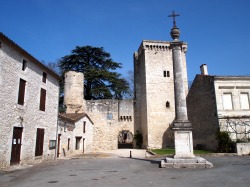 Greg loves the formality of kissing everyone on each cheek, though he made a slight faux pas leaning in to kiss our pretty bank manager a few weeks ago! She was good natured about it and laughed it off, but Greg was very embarrassed. Communication breakdowns are common and usually greeted with humour. Last week our vet finally explained why our dogs’ passports had taken so long… they had sent off the application stating that one of our dogs was 47 years old and called Greg!

What advice do you have for others thinking about moving to France?

It is essential to organise all paperwork in France before embarking on any other activity, as it generally takes a long time to obtain. Our carte de sejour took two months to organise. We had to have all of our documentation translated into French by an authorised translator, have bank accounts set up and work information organised for my husband. We needed much of the same paperwork to clear our furniture through customs.