An ongoing link with Australia 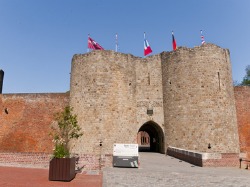 Péronne in northern France, which was famously liberated by Australian troops near the end of World War I, has an ongoing link with Australia after signing a ‘friendship’ agreement with the city of Albany in 2008.

For many of Australia’s 30,000 troops, Albany, Western Australia’s oldest settlement, was their last sight of their home nation as they left to fight in Gallipoli and the Western Front. In August and September 1918, Australian troops fought the battle of Mont St Quentin, culminating in fierce fighting on September 1 which led to the liberation of Péronne in stages over the next couple of days. Australian soldiers won six Victoria Crosses on 1 September at the battle of Mont St Quentin.

Like many towns in the north of France, Péronne gives special honour to the memory of Australian troops. When the town was liberated, the Australians dubbed the shell-damaged main street ‘Roo de Kanga’. In honour of the troops’ bravery and sacrifice, the townsfolk retained the name and added the sub-text ‘We do not forget Australia’.

Today, Péronne is home to the Historic de la Grande Guerre, a museum charting the history of World War I, and the town offers visitors a poignant reminder of the tragedy of war.