A corner of Australia in France 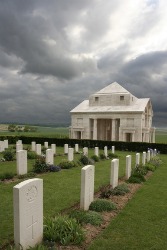 The French town of Villers-Bretonneux in Picardie is less than 20km from Amiens and has been twinned with Robinvale (Victoria) since 1984.

Villers-Bretonneux presents itself as ‘a corner of Australia in France’ and this is where you will find the Australian National War Memorial and the Musée Franco-Australien.

The Musée Franco-Australien was created in 1975 but moved from its original home to the Ecole Victoria, which was much more spacious. In addition to the exhibits on display is a video room and a library.

On 25 April each year, the town marks Anzac Day with a game of Australian football. The French and Australians will turn out to watch two teams of 18 players compete at Mémorial Stadium.