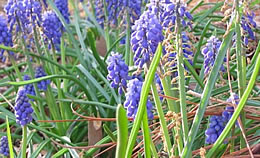 Although it doesn’t seem possible, it is a year to the day since I posted the first of my garden meanderings and I would like to thank the folk out there who have read them. Spring has sprung, or, at least the cuckoo has arrived a few days early compared to last year, but as yet we have not seen any swallows. I am rather pleased to see wild grape hyacinths growing on our land – I hadn’t realized that they are native to France I must admit.

April is a busy month for the gardener, once the ground is dry enough to walk on of course. At the moment the vegetable garden has priority – the first broad beans are up and it is time to start planting some more seeds to get a succession, the same applies to the peas – nothing nicer than fresh peas from the garden. The trenches for the potatoes are open, ready to have a layer of well-rotted manure in the bottom before the potatoes are planted – at the moment they are chitting merrily in seed trays in the spare room! A tip I read in an old gardening book recently is to put grass mowings over the seed potatoes before the trenches are filled in as this helps to prevent scab. This is the month for sowing the majority of seeds and, towards the end of the month, buying in plants. Be aware that a lot of the plants offered for sale may have come straight out of heated greenhouses, so harden them off for a few days – leave them out during the day and bring them in at night, so they don’t get too much of a shock. If you want to plant soft fruit and missed out on the bare rooted plants, there is still time to plant out container grown ones, keeping an eye on the watering until they are established.

In the flower garden April is the month for planting out hardy perennials. Dead head the daffodils as they finish and trim the forsythia, cutting out a third to a half of the flowering branches. As the grass is really starting to grow, drag out the mower and give it a clean and a service – we have just strimmed areas that will eventually be mown and it was amazing just how much grass was raked up.

When we moved in last year our neighbours suggested that we “Roundup” the ground that we planned to have as our veg plot – as you may remember, we didn’t. We have used it on paths in the past, but that will not be done again. Did any one out there watch Arte a couple of weeks ago and see the documentary “Le monde selon Monsanto” – the world according to Monsanto? Marie-Monique Robin based the programme on her book and all the facts that she found are openly available on the web. Showing my ignorance, I hadn’t realized that Monsanto had produced “agent orange” the Vietnam war defoliant, plus had been responsible for a lot of dioxin poisoning in America. What truly horrified me is their attempt to control the world seed production, trapping farmers in third world countries into buying gm seeds – maize, cotton etc, causing huge problems in Mexico and central America, as well as major problems and deaths in India but they are also producing gm seeds for the sort of vegetables that we try to grow – aubergines, cauliflowers, tomatoes etc. We all love the idea of fresh garden produce, but when you have to question the provenance of the seeds themselves! We have just ordered a copy of the dvd from www.arte-boutique.fr (It is available with an English commentary), as we want to send it to the conservationist in the family. I would welcome comments from anyone else who saw it. Talking to our local miller (stone ground wholemeal flour) the other day, he said that he could no longer guarantee that there’s not gm seed in any maize in his store!!!!!