One of my favorite landscapes in the Alpes maritimes is an old Roman Quarry situated above Monaco in La Turbie. It is the contrast of the hand of man cutting straight blocks of stone from the broad sweeping curves of the rock veins and the abundance of vegetation growing in the harshest of conditions that is so incredibly inspiring.

Often within our own gardens we get caught between a rock and a hard place. Daunted by the mass of mineral materials we are dwarfed into thinking that nothing could ever grow. But here in a similarly mineral mass, life is bursting out our every crack and crevice. In every depression and fault of the stone, slowly decomposed plant material has collected. Absorbing moisture it has allowed the first sedums to collect then once an initial mass of vegetation occurs, more humus and matter accumulates and the first grasses and perennials and small shrubs to take hold. If there is a fault line, deep rooted shrubs and trees can delve down and take hold.

In that narrow space behind the house where nothing seems to grow or in that tight space between the drive way or the front of the house, this is often where plants and nature shine the most. It is here where it has to prove its worth and the plants grow with a different intent. Not that of voluptuous bucolic opulence but with a sinewy defined will to live. 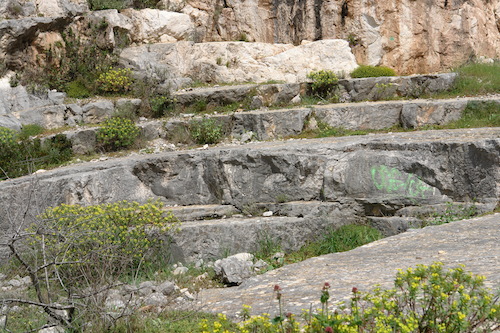 Here in the quarry the hard edges are softened by drifts of gravel and organic matter dusted in by the swirling wind. These help to soften the sharp line between the vertical and the horizontal plane. They also provide a growing medium. These offer tiny opportunities for life and trim the massive stone edifices with delicate touches of colour and texture. The quarry its self is a series of bowls hewn out of the mountain side some north and some south facing, creating a series of protected rooms and environmental conditions. The quarry is used for walking, picnicking and serious play, from abseiling and climbing to BB gun wars. The balance of mineral and vegetated areas give plenty of space for all this activity as the large areas of bare rock leave little room for anything but lichens and sedums to grow. This is the sort of balance of space we try to create in our own gardens. Here, there is no question it works.

As this is a natural landscape there are hundreds of species of plants co-habiting. There is however a hierarchy amongst them, dominant plants that we see again and again throughout the space. They have adapted in different areas depending on the conditions. An ash tree is dwarfed and twisted growing out of a rock crevice on the south facing side of the rock face, yet develops into a tall multi-stemmed tree on the north side of the quarry protected from the sun and the steady onslaught of the Mistral winds. This repetition gives unity to the landscape, it ties it together one feels that one is in a singular space; there is continuity within the complexity which is reassuring. 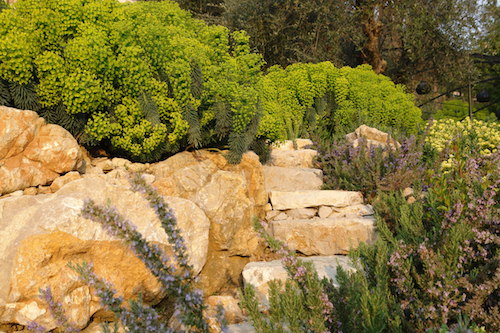 The water in this landscape is scarce, a circle of small holes punched out of a smooth rock face once served as a measuring device for the masons now collects small pockets of water after the rain, these shine like silver dots on the face of an ancient clock. The rock strata leans back towards the quarry wall on the south face creating seasonal pools which in turn creates its own quality of vegetation. The old limestone pavement which was naturally created before the time of the Romans shows on the crest of the rock face, vestiges of time gone by. Water seeps out of the base of fault lines marking the rock over time even when there is no water, water has left its mark.

Walking out of the quarry I reflect on the gardens I have created recently and other ones that I have visited and feel content in knowing there is lots of work ahead to come even close to the elegance and beauty of this, one of my favorite spots in the Alpes Maritimes. Inspired by the challenge of trying to create spectacular landscapes in difficult areas within the garden.

• With thanks to James Basson

James Basson is an international garden designer, based in Monaco who specialises in dry, sustainable gardens that mix contemporary design with traditional skills. His designs have received international recognition and numerous awards around the world – at the ‘RHS Chelsea Flower Show’ and the ‘RHS Hampton Court Flower Show’ in the UK; at the ‘Gardening World Cup’ in Japan and at the ‘PHS Philadelphia Flower Show’. Two Gold Medals highlight the awards, received for the garden ‘After the Fire’ at the ‘Chelsea Flower Show’ and for the garden ‘Dulce et Decorum est’ at the ‘Gardening World Cup’.
www.scapedesign.com