Trials of a smallholder 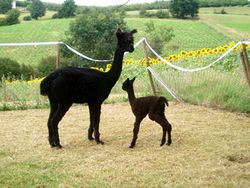 Sunday night all alpacas were fine, there were lots of flies and midges about though. Monday morning and all still seemed well when I fed them. Come the evening feed and I noticed that the white cria’s fleece was looking creamy yellow on one side and she looked as though she had been standing in mud. The light was beginning to go but I managed to catch her and to my horror found that the creamy looking patch, the size of a saucer, was due to fly eggs. Not knowing what else to do, I grabbed the only thing I could think of, a bottle of iodine and washed the area the best I could. By now it was dark so I retired to scour the Internet for what to do.

Despite only sleeping for about an hour and a half and spending the rest of the time on the Internet searching I found nothing to help me.

8:30 am found me on the doorstep of the vet’s waiting for him to open the doors. When I’d checked the cria in the morning, the eggs had gone – meaning that they had probably hatched – and the cria was limping. I came away from the vet’s with an iodine scrub to remove the eggs, massive antibiotic tablets that I had to quarter and give her twice a day, an antiseptic spray and a fly spray to spray the other alpacas with.

I scrubbed away with the iodine again, washed all her feet that were now obviously infested with maggots and picked out those I could with the tweezers I’d bought that morning too. There was no way she was going to eat the antibiotic though. 2 pm and I was back at the vets to demand an injection of antibiotic and to say that I really didn’t feel that the Iodine was working or if it was it was far to slow. There was a different vet there. He thought I really should be able to force her to eat the antibiotic but relented and gave me two shots to give her. He also didn’t like the idea of the iodine scrub and said I should use a bleach solution to wash the maggoty areas. It was now obvious that she was raw under the chest too but as far as I could see through the wet fleece (from all the washing) they had not entered anywhere there yet.

I was thankful to get the antibiotics into her as one foot was now very swollen and carried on drenching everything with the bleach solution and spraying the wounds with the antiseptic. By the evening it was obvious that the flies had really welcomed all the wet fleece and had laid another batch of eggs to hatch overnight. I was close to despair not knowing what to do. Then I decided to try something different. I took her into the house and put her in the shower and rinsed off as many of the maggots as I could which was quite a few. I then gave her a blow-dry to stop the flies making straight for her wet fleece. This drove out quite a few more maggots. I was then able to cut her dry fleece and cut out as many of the remaining eggs as I could. All this took over 2 hours and she needed to get back to her mum. A quick spray of antiseptic and I left her for the night.

It was then that I remembered an alpaca breeder I been to see when on my house-hunting trip here last year. I called him and to my great relief he was able to tell me what I needed to give her. 8:30 the following morning and I’m back at the vets to demand a shot of ‘Ivomec’. Unfortunately the vet’s attitude was that it wouldn’t work and that flystrike was “very serious” (well I wouldn’t have been there 3 times if I didn’t think it was would I?). Eventually he did give me a shot of the stuff and the receptionist also insisted I take a ‘wash’ to kill the maggots (this is a story in it’s self but not for here) on the feet.

The cria got the shot as soon as I got home. Then in the afternoon, my friend Ann came round and we gave the cria her second shot of antibiotics and administered the ‘wash’. After starting one way round we both agreed it was better if I restrained the cria so Ann set to with the wash and the tweezers. She removed more maggots than I care to think about and eventually all 4 feet were looking maggot free. They than got soaked well and truly with the ‘wash’ and we also did her chest as well. By now I’d got fly repellent on all the herd including the cria so she remained relatively clear of flies even with the wet fleece.

Today she is still looking OK and I’m managing to give her the antibiotic tablets; thankfully as her foot is still a bit swollen. I feel more confident that she will pull through than I did on Tuesday when I could see hundreds more maggots hatching than I was able to remove from her. She’s not out of the woods yet but at least now I have hope.