Much treasured for their fantastic blooms 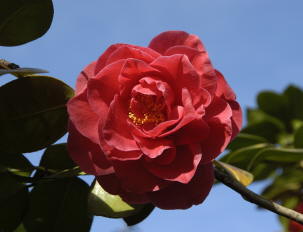 Camellias really cannot fail to add a touch of class to any garden at this time of year. It was the monks in rich Buddhist and Daoist monasteries as well as the rich landowners in both Japan and China who first appreciated the spectrum of bright colours from the wild Camellias growing in the forests. Varieties of Camellia were being produced up to 1,000 years ago.

During the 19th Century, hundreds of different varieties came into Europe from Japan. Some are still around even today and have retained their Japanese names. There are more than 32,000 Camellias on the register of the International Camellia Society. Most of them are cultivars of Camellia japonica.

Camellias thrive in well-drained acidic soils in a reasonably sheltered site. Mix in plenty of leaf mould or well-rotted bark chips when planting. East and north facing walls are best avoided due to biting winds in winter causing damage to the flower buds. The japonicas prefer some shade, whilst the williamsii are happy in both sun and shade. Williamsii cultivars are crosses between C. japonica and C. saluenensis, a species that grows wild in the provinces of Yunnan and Sichuan in southern China.

An annual feed, suitable for ericaceous (acid loving) plants is required by young plants. The best time for this is after flowering. Some people get concerned about pruning; this is best done immediately after flowering, before the new green leaves appear and you can also take out strong shoots in late summer.

With thanks to Miranda Bell