Gardening in a Mediterranean climate offers several restrictions in terms of what will and what won’t survive due to the hot summers, heavy rainfall at concentrated times of the year and the maritime winds that dry the air and soil. Taking inspiration from the surrounding landscape and seeing what works– with no input at all from man– can offer valuable lessons and prove that it is possible to produce a truly sustainable garden inspired by nature.

The use of water in gardens is a tricky subject in the Mediterranean climate. Violent storms at certain times of the year result in rapid run-off streams which have an important effect on the natural landscapes. This is also an area that is rich in natural springs, from mountain lakes to the rivers that run down to the Mediterranean Sea. Water softens what is otherwise a hard landscape, and gives it a calming quality. You only have to have experienced one of the natural grottos with moss covered walls to appreciate the beauty and contrast this can provide. Using water in the garden to recreate this natural quality rather than for irrigation purposes can have magical results. 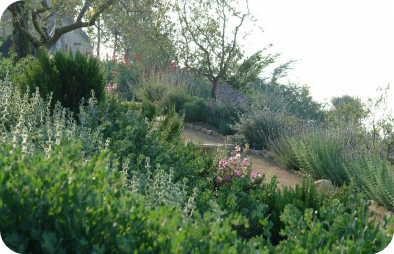 Despite common perceptions it is possible to have a beautiful garden with no irrigation which gives several advantages, some more obvious than others. Less water means less weeds, and in turn less growth therefore less pruning thus keeping maintenance to a minimum. It is possible to have a machine-free maintenance programme eliminating the need for hedge trimmers, mowers and blowers other than a bi-annual strim. People tend to forget that Mediterranean plants don’t like water. If they are over-watered the longevity of the plant is threatened, something often seen in lavender plantings.

With the increasing number of tiger mosquitoes in the area, less water also serves to discourage them from reproducing as –unlike the traditional mosquito that lays its eggs in stagnant water– this new breed of mosquitoes likes nothing better than damp grass.

Although the desire for a nice green lawn is understandable, it is important to realize that it is in fact out of sync with its natural surroundings in this climate, and clashes considerably with the more subdues tones of the landscape in which it is situated. 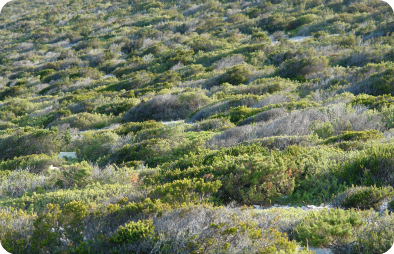 When it comes to planting look again to what nature can teach us. In Mediterranean areas there are typically three main landscapes from which to draw inspiration.