What will grow, and what won’t? 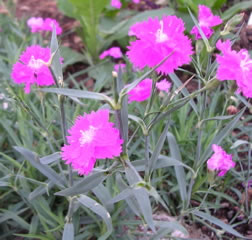 In deciding what flowers to grow, we chose varieties that we read would thrive in the hot, dry and sunny conditions we were told to expect (resiste a la secheresse) and to brighten up le cimitiere at the front of the house (which by now had, had a top layer of breezeblocks removed and a path broken across the middle making four open and airy flower beds). So we bought perennials like Veronique Teucrium (Veronicas), ‘Johnson’s Blue’ geraniums and nepeta (catmint) ‘Six Hills Giant’ and raised annual seeds such as tournesol (sunflowers), tabac d’ornement (nicotiana) and pois de senteur (sweet peas). 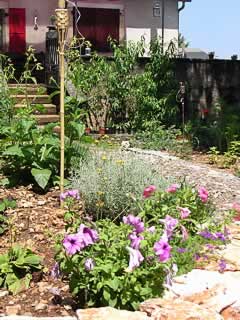 We noticed that the flowers and shrubs don’t seem to grow as large or as quickly in their first season as we remembered them doing in wet Wales where we lived previously! Plants such as Verbena Bonariensis, which we planted as an architectural feature at the back of the beds because they can reach two or two and a half metres in height, have only reached about half that height here. Cranesbill geraniums that in our previous garden were rampant in their first year, have stayed quite small plants although we planted them deliberately to be invasive and cover up the grey walls of le cimitiere! It is probably a case of bearing the different conditions in mind when planning a garden and having a bit of patience to let the plants get established….and watering, watering, watering! 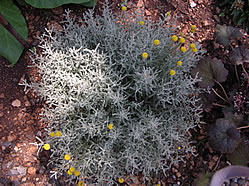 Three plants we would highly recommend because they have just continued to grow and flower through drought, heat and storm and to look completely at home here:
· Nepeta Six Hills Giant (Nepeta)
· Pinks (Oeillets Mignardises)
· Santolina (Santoline)

We chose a wide range of vegetable seeds to try out as we wanted to see what grew well in the first year and what didn’t. Then we could review successes and failures at the end of the season and plan accordingly for the following year. 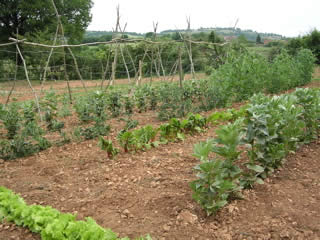 We found that peas (pois), mangetout (pois mangetout), broad beans (feves) and haricot beans (haricots) have produced excellent crops both from seeds sown straight into the ground and from small plants raised initially in the poly tunnel then planted out. Onions too, grown from sets and seeds have done very well. Courgettes, of course, are in full production as will be tomatoes, peppers and chilli peppers which are threatening to yield a bumper crop! 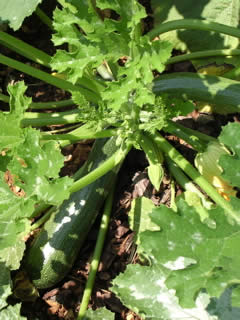 Unfortunately, not everything has grown well on the vegetable front and we have had a major disappointment with the brassicas (cauliflower, cabbage, sprouts, broccoli). Although the seed germinated quickly and they became strong plantlings, once planted out into well prepared soil they seemed to wither, developing pale patches and becoming scorched looking. We have asked advice of both French and English friends and neighbours and received the following explanations: