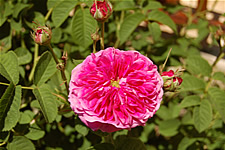 June has got to be the month of the rose. Everywhere you go now there are roses in full bloom, some of the most delightful peering over the tops of old stone walls. Roses are resilient plants – we know of abandoned houses that are almost ruins, but struggling through the rubble and brush you can still see roses blooming away. Many of these are really old varieties that it is almost impossible to name. Should you want to try, one of the best sites I have found is that of David Austin roses, a stalwart of old roses and also the creator of many new varieties in England. In France the hybridisers have worked for centuries, creating shapes and forms from native species. I love to see the old roses grown amongst the newer varieties – if you want a continuous display you cannot rely on old roses as they usually only have one main flush of flowers in June. For a superb selection of old roses the pépinière in Prayssac will take a lot of beating – should you live near Labastide du Vert try growing a Henri Martin rose – a brilliant red moss rose – in celebration of your famous painter. Well worth a visit is the rose labyrinth near Figeac. We visited several days after it opened a few years ago, as we were interested in the design aspect. There you will see French roses of all shapes and sizes. Were you aware that Peace, probably one of the best-known roses in the world, was created by the Meilland nursery in 1945 (near Lyon) and is often sold here under its original name of Madame A Meilland.

Once the first flush of bloom is over it is important to start a regime of dead heading. This is not a case of just pulling the dead flower off, but getting out the secateurs and cutting the stem just above the second or third leaf down from the dead flower, above an outward facing bud, thus keeping the open centre of the bush. You will get a much better display like this.

The rest of the garden is growing at a pace. The cold weather hasn’t helped the tomatoes – les Saintes Glaces didn’t give us frost, but we certainly had hail the size of grapes – and I still have a few annuals to put out as the ground has been too wet, but there is still time to do it. The fruit trees are promising a good crop – wait until after the natural June drop and if there are still a lot of fruitlets left be fairly ruthless in thinning, to get better sized fruit in the autumn. The soft fruit bushes are promising well. I still had a lot of gooseberries in the freezer from last year, so I made a batch of jam, mixing in a few heads (in muslin) of elderflowers. They really changed the flavour, very pleasant.

In the vegetable garden keep up a succession of sowings of salads and beans and try to stay on top of the weeds by regular hoeing (if you can get on the ground that is) – it’s a lot easier to find the onions like that!

I have been looking into getting rid of horse / mares tail (prêle, queue-de-cheval.) It is a very ancient plant, full of silica, loved by the herbalists. It is a lover of acid soils, so liming would seem to be an answer, but the roots go down a very long way. Continuous cutting back seems to have an effect, in that it slows it down somewhat. My daughter had the problem in Hampshire and she finally solved it by turning her chickens on to it, but she didn’t say what it did to the eggs – I imagine rock hard shells. The received wisdom would seem to be spraying (ugh!) with Roundup, having bent the stems and broken the outer sheath on the plant to enable the liquid to enter the plant – or learn to live with it! Do alpacas have a need for silica in their diet?